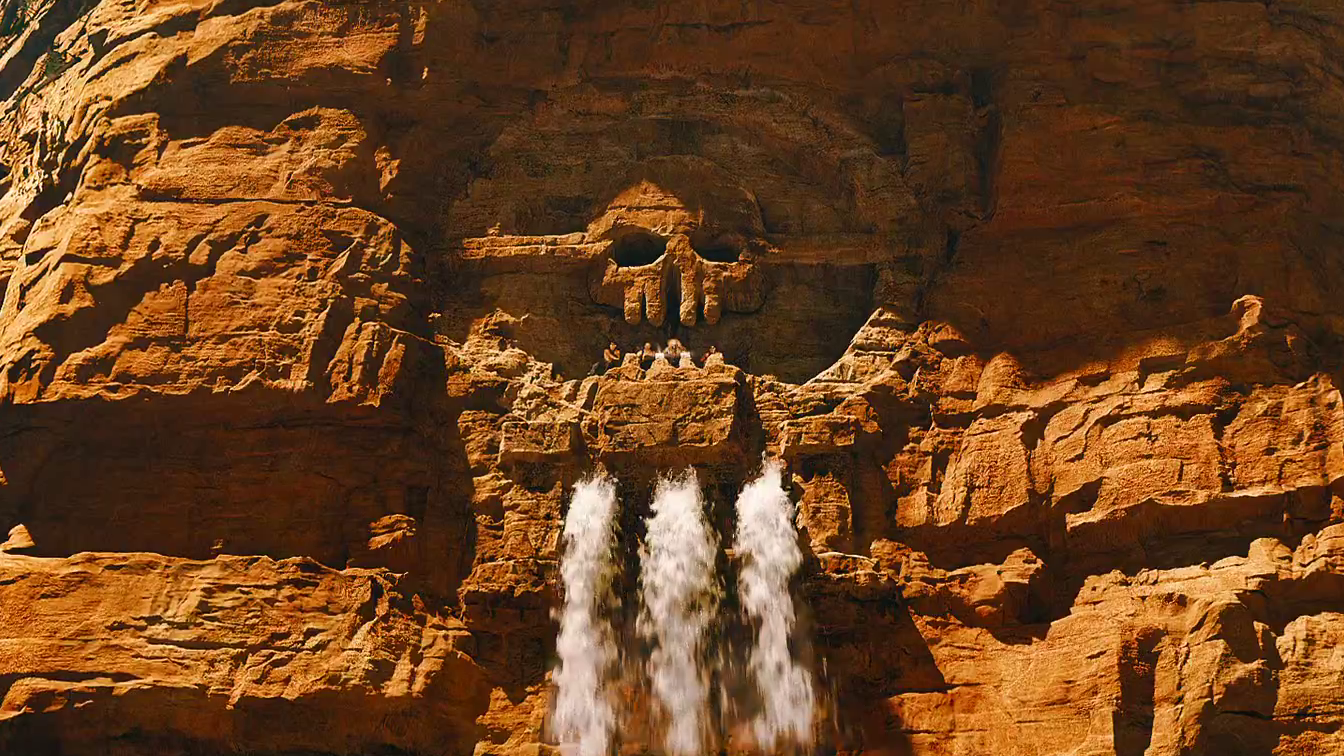 WARNING: This piece contains many spoilers for Mad Max: Fury Road. If you haven’t seen the film, this will spoil the hell out of it and you likely won’t understand what’s being talked about.

Mad Max: Fury Road is a freak of nature. It’s the resurrection of a long-dead 80s action franchise, directed by a guy who spent the last 20 years making movies about talking animals, that was somehow so well received that it was nominated for a Best Picture Oscar.* It’s one long (and exquisitely crafted) chase scene, yet the snootiest of critics have raved over it.

Sure, the action is great, but so is its lean and evocative sense of visual storytelling. There’s barely a drop of exposition in this film, but the world is so fleshed out and the story so efficiently told that it doesn’t matter in the least. During my first viewing of the battle with the Buzzards, when that poor War Boy got the arrows to the head, rallied himself, sprayed himself all shiny and chrome and yelled, “Witness me!” I actually gasped. Suddenly so much of what I had seen of Immortan Joe, the War Boys and the Citadel all came falling into place. Just perfect.

But there’s more going on in Fury Road than science fictional worldbuilding. There is a continuing theme of people being dehumanized, subsumed and commodified by powerful, violent societal forces, and Miller ties this together with a motif of liquid imagery.

As one might expect given the emphasis on vehicles, gas (guzzoline in wastelander parlance) has been very important to the Mad Max franchise. In Mad Max 2: The Road Warrior, a car or truck isn’t simply a means of transportation but a weapon, offensive and defensive. It is a home. It can even be an extension of cultural and personal identity. You don’t spend so much time personalizing your scrap metal hot rod without it being personal.

If nothing else, the way characters scrounge for gas evokes an entirely different liquid: water. I’ll obviously return to water in a bit, but for now consider how our characters battle each other in the arid Outback over tanks of gas, yet they never seem to have an issue with water. They need gas, not water,  for survival in The Road Warrior. It’s the substance that our characters’ day-to-day existence revolves around.

Fury Road’s treatment of gasoline is completely different. Gas is not something to be scrounged for but a simple commodity in the same way it is for us in pre-apocalyptic society. There’s an entire settlement, Gastown, that focuses on its creation and trades it for other resources. The world of Fury Road is not just one of survivors scrambling to get by, but of a heavily stratified technological society in the ascendant. The People Eater and the rest of the wasteland warlords have constructed a machine, and gasoline — its production, its distribution, its use — is a single part of it.

You know what? Screw it. Let’s slap a capital M on Machine. Every character in Fury Road is part of the Machine.

As I mentioned before, water (aka Aqua Cola) doesn’t play much of a role in The Road Warrior. The same cannot be said of Fury Road. Water is, of course, a pre-requisite for life. To people living in Fury Road’s post-nuclear, post-collapse wasteland, the scarcity of fresh water would be an ongoing problem.

See what happened to The Many Mothers when the Green Place went sour, forcing them to become badass old biker bandits instead of farmers. Water isn’t just needed for hydration but agriculture and thus civilization.

Here’s the thing, though. Water shouldn’t be that scarce in the wasteland. Immortan Joe has a metric fuck ton of it! He has access to a limitless supply of fresh water and he controls the taps. He can create scarcity and use it for material gain, trading it with his warlord buddies for fuel and weaponry. He has also weaponized water’s scarcity against his own subjects. The people at the very bottom of the Citadel’s hierarchy, literally and figuratively, are subjugated not just through the threat of violence but through lack of access to water. They literally cannot survive without Joe’s “generosity,” which not only keeps them ill and weak but reinforces his cult of personality. So this substance, which is the source of all life, is yet another piece of the Machine.

We first encounter water when Immortan Joe gives his forlorn subjects a brief taste of it during his speech, but it shows up in high-profile ways twice more. The first is when Max finally meets Furiosa and the bathing wives. This is the point in the film where Max ceases to be a dehumanized blood bag and begins his journey toward redemption. The second is when Max and Furiosa and company return to the Citadel and Joe’s “breeders” open the gates, making the water available to all. Which leads us to…

Mother’s milk is one of the strangest elements in Immortan Joe’s regime, and it’s not entirely clear to me what it means to him. He has women hooked up to milking machines like dairy cattle. I call them breeders since one War Boy refers to Joe’s wives as his prized breeders. I’m guessing these less-prized breeders are kept continually pregnant to produce… more War Boys? Or simply to produce more milk?

We see Joe’s son Rictus Erectus sample a new batch of milk and give his approval. Is this milk intended for adult consumption? Infants? Does it have any sort of ritual significance? Given what we know about Joe I wouldn’t be surprised. Dude’s big on ritual. But, again, it’s not entirely clear.

Since it’s included in the War Rig along with water, it’s pretty clear that Joe is using milk as a trade commodity. I’m willing to bet that his monopoly on fresh water also gives him a monopoly on healthy, non-toxic milk. So, just as with water, a life-giving substance is used to propel Joe’s mechanized war machine.

Which brings us to a key moment in Max’s story. The War Rig is overheating and the Bullet Farmer is in hot pursuit. Max grabs a couple of gas cans and prepares to head off into the fog:

“Hey – you need to take the War Rig half a klick down the track.”

“What if you’re not back by the time the engines are cooled?”

This is the first action on Max’s part that is purely selfless. Given that Max is a violent man who lives in a violent world, that action is violent. After a dimly seen explosion, he emerges from the fog, covered in blood. He starts washing his face.

He shrugs and finishes washing. He’s yet again taken lives, but he’s taken them to save those of innocents. He rinses off death with a symbol of life.

Later, as our heroes return triumphant to the Citadel, it is the breeders themselves who open the gates and free the water. Life-givers giving life in multiple ways, both now divorced from the Machine.

At the beginning of Fury Road,  Immortan Joe’s War Boys capture Max and turn him into a “blood-bag.” From there till the near the end of the film, he is known only by that name and “fool.” The Organic Mechanic tattoos him with all the necessary info: his blood, his nature and where he came from.

These notes are tattooed upside down, so the Organic Mechanic can read them while Max is hanging, being drained. He’s completely dehumanized; reduced to a vessel for the only thing that really matters to Joe. Max’s blood and Max himself only exist to fuel the Machine.

He manages to secure his own blood after he encounters (and has that amazing brawl with) Furiosa, marking the first time in the film he has any agency. He truly reclaims his blood when he gives the dying Furiosa a transfusion by choice. He’s managed to extract himself from the Machine and is able to use his blood to save a life rather than perpetuate a system of death and oppression.

Meanwhile, Immortan Joe is also concerned with a more metaphorical blood. Perhaps frustrated by the flaws of his two existing sons, he wants an heir that is “perfect in every way,” so he has claimed “wives.” Wives who are in reality sex slaves and warlord incubators. Just like blood-bag Max, these young women are valued not for themselves but for what they can at least potentially contain: Joe’s legacy. When Splendid is fatally injured she is no longer useful, so Joe commands the Meat Mechanic to chop her open and retrieve his son.

Man… The Organic Mechanic. In a movie filled with amazing names, that’s one of my favorites. He’s called a mechanic whereas actual mechanics, referred to as “black thumbs,” are not. Mechanic appears to be a title reserved for what we would call doctors, and it’s appropriate. Rather than actually following anything close to the Hippocratic Oath, it’s his job to help keep all the parts of Joe’s system functioning. He thumps Splendid’s dead son around like a sack of potatoes and he twirls the umbilical cord with the blaséness of a workman who is totally comfortable with his bloody business.

The flesh is disposable, but machinery is holy. Which brings us to…

When I refer to the Machine, I don’t just refer to Joe’s regime, but the Bullet Farm, Gastown and whatever unseen players have aligned themselves with the Citadel. But, within the Citadel, the Machine manifests itself as Joe’s Cult of the V8.** This is the vehicle-centric faith that binds the Citadel together around Joe. It is through this Cult that the idea of people being parts of the greater Machine becomes more overt. The War Boys don’t just worship engines, they want to be them.

At the start of Fury Road, Max is nothing but a blood-bag. Being topped off by Max is poor, ailing Nux. Nux, like all the other War Boys, is terminally ill and is nearing the end of his “half-life.” What disease the War Boys have is never made clear, although “half-life” suggests radiation exposure. Does Joe choose ill children or does he afflict them? Either way, the result is the same. In their short lives the only hope they have is to “die historic on the Fury Road” and live forever in Valhalla.

Even when they are young War Pups they live and work as part of the machinery of the Citadel, operating gates and elevators. When they get older they decorate their vehicles with mixtures of machine and human imagery, scarify their bodies with engine designs and, in the end, spray paint themselves “shiny and chrome” before sacrificing themselves for Joe. This is the only way they can rise from the ashes of their world: by ceasing to be human and becoming chrome machines. “Witness me!”

Nux tries to achieve this more than once and, through sheer dumb luck, fails each time. Those failures, combined with his humiliation in front of Immortan Joe and especially an act of kindness from Capable, break him free. After that, he uses his abilities as a fighter, driver and black thumb to help others, not to support a death-dealing Machine that doesn’t give a rat’s ass about him. Nux’s final words are “Witness me,” but he has no need for spray paint. He’s asking to be remembered as a human. Not a cog.

*It also cleaned up when it came to the “technical awards,” a phrase that drives me nuts. The idea that costume design, film editing, et cetera are merely “technical” is just plain silly.

** This name is never uttered in the film but pops up in other sources. I am using it for the sake of convenience.