DREDD and the War on Drugs

The human cost of law and order. 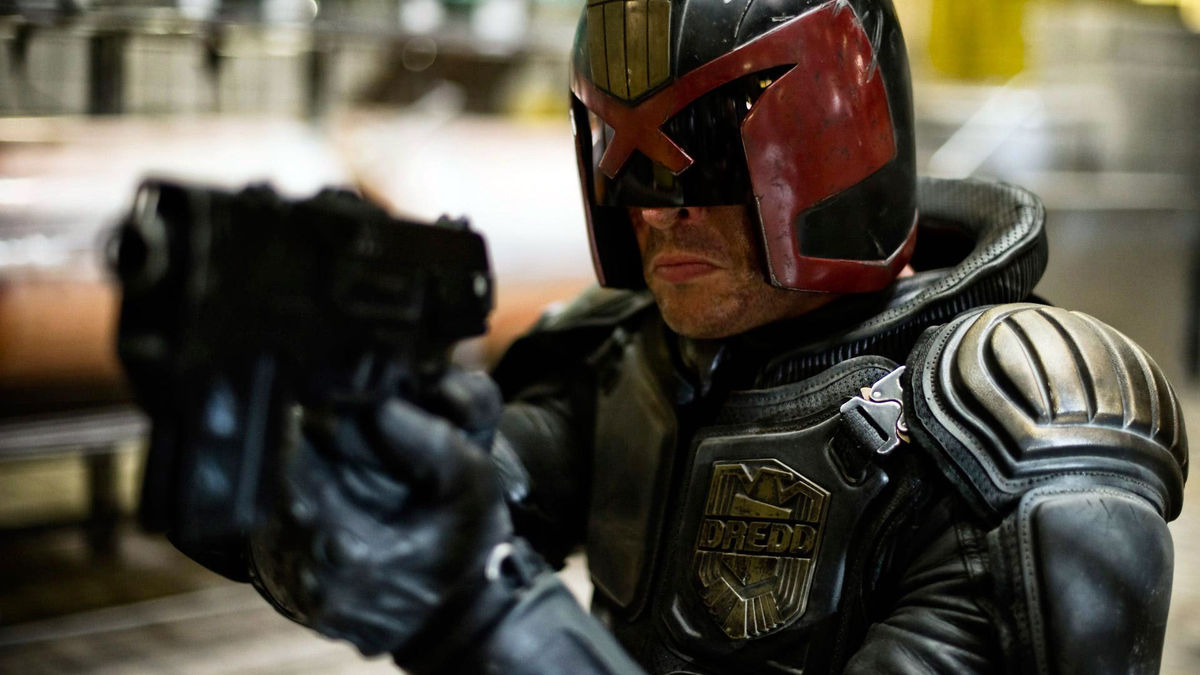 “We must rage what I have called ‘total war’ against public enemy number one in the United States, the problem of dangerous drugs” – Richard Nixon

Judge Dredd was created in 1977 to satirise the fascism of the Dirty Harry-style cowboy cop stories popular at the time. Seventies America was the decade of ‘law and order’. The phrase was repeated endlessly by Nixon as part of his Southern Strategy which won the 1972 election, appealing to racist white voters who feared groups like the Black Panthers would overthrow society.

Part of this Strategy was Nixon announcing a ‘war on drugs’, which he blamed for rising crime rates. As his adviser John Ehrlichman later admitted, their two main enemies were the anti-war left and the civil rights movement. Neither could be outright criminalised, but by associating hippies with cannabis and black people with heroin both could be legally persecuted by the state, to restore law and order.

This authoritarian attitude was reflected in fiction of the period. Heroic policemen were now men of action, fighting outside the useless rules and regulations protecting criminals at the expense of the innocent citizens. They abused suspects, ignored due process and opened fire without provocation, but while the chief always yelled at them they were allowed to keep their jobs because dammit, they were the only kind of men who could keep the streets safe.

The difference between Harry Callaghan and Dredd is that Dredd exists in a world where his style of policing is official policy. Callaghan is an anomaly, the writer’s fantasy ideal of how a policeman should act in the face of the real world, but Dredd’s purpose is to show what would happen if the world agreed. He doesn’t even have to pithily tell his bosses why the men he guns down are cartoonishly evil, as killing on sight is in his job description. He is the faceless, dispassionate embodiment of his country’s justice system. As he often says, he is the law.

The 2012 adaptation Dredd is a short and simple movie. Its premise is that of countless action crime films, as a grizzled veteran cop and an optimistic ingénue work together to take down a local drug kingpin. Dredd and rookie cop Anderson arrest a suspect in a mile-high skyscraper block, who has compromising information on its criminal overlord. After the crime boss locks the building down, they must shoot their way to her on the top floor to survive.

Beyond its basic plot Dredd is a surprisingly subtle parable about the futility and human cost of the war on drugs. It achieves this in two major ways. First, while presenting itself as a thrilling action movie, the film carefully frames its protagonists’ actions and ultimate triumphs as largely meaningless in the grand scheme of things.

Dredd begins with a very standard opening for the kind of action movie it satirises. Dredd is in pursuit of three violent drug addicts, who run down an innocent man before Dredd shoots out their tires in front of a shopping mall. The one who survives takes a hostage after killing several shoppers, but is quickly killed by Dredd. As the scene ends we get our first real worldbuilding moment of life in the dystopian world of Mega City One, as a bored cleaner sweeps the blood from the floor with a wagon of bodies behind him, the PA system assuring customers not to worry as the food court will be open again shortly.

This opening is never remarked on again, and when Dredd briefs Anderson for her first assignment he tells her the Judges can only respond to six percent of serious crimes. Despite their imposing presence in person and incredible bodycount, the Judges are presented as an ineffectual organisation unable to enact meaningful change. When they arrive at Peach Trees, the skyscraper city block, we learn the local drug kingpin Mama (yes, Mama) took it over in a vicious gang war without the Judges even noticing.

In the end, after Dredd and Anderson have destroyed Mama and her gang, there’s a real feeling of anti-climax. Anderson walks out a different person, but it’s clear that in this city the deaths of a hundred people will barely even make the news. Dredd reports it to his superior as just another day on the job, and the movie agrees with him.

Reagan turned Nixon’s rhetorical war into a literal one. As crack cocaine use spread among inner city minority communities, Reagan sold it to voters as a plague turning black men feral, who needed to be locked up for the sake of public safety. The media latched on to this, presenting images night after night of black men being arrested while calling for harsher punishments and tougher police. The popularity of harsh anti-drug policies caused America’s prison population to explode, and later ignited a deadly game of one-upmanship between politicians over who could be stricter on drugs, in order to court the racist vote.

During Bush II’s presidency domestic law enforcement rapidly militarised. In the early War on Terror years, when Americans saw Bin Laden as a supervillain hiding in his SPECTRE mountain fortress, police forces were given huge amounts of military equipment and training to fight terrorism. Training became increasingly military, often overseen by actual commandos, causing officers to adapt what has been termed a “warrior mentality” of seeing every suspect as an immediate, violent threat.

Officers now routinely walk their beats in black battle uniforms, carrying assault rifles, and paramilitary SWAT teams are called out for minor infractions. Forty thousand SWAT raids happened the year Bush stepped down, and that number has only doubled since, the vast majority being search warrants for drug possession.

The innocent bodycount of these raids is ridiculous. A New York Times report this year listed at least eighty-one such deaths in SWAT raids this decade alone. It’s become so common for SWAT teams to shoot unarmed people, pets and children that their murders aren’t even national news anymore. Americans just accept that driving APCs through homes and killing their owners, all in the hope of finding a bag of cocaine, is normal.

The second way Dredd depicts the futility of the War on Drugs is in its heavy focus on the collateral damage of Dredd and Anderson’s mission. A lot of innocent people die in this film, and it lingers on their deaths in a deeply unpleasant way. In one scene Mama and her gang reduce an entire street to flaming rubble trying to kill Dredd, with shot after shot showing residents shredded by minigun fire as Dredd narrowly escapes the same fate.

When our heroes fight back it’s often portrayed as unheroic and horrible. The first two action scenes are downright unfair in how overpowered the Judges are compared to their opponents, incapacitating them with gas or a stun grenade and slaughtering them en masse. After the second, Anderson stands over a wounded gang member begging for his life, and Dredd has her kill him in cold blood.

Later the two hide in a woman’s apartment, who lets them stay there as her husband is one of the gang members looking for them, and if they don’t find the Judges he won’t be killed. He’s shown as a decent family man who seems to have become a gang enforcer to feed his wife and child. And as Anderson realises, he was the man she shot fifteen minutes ago.

This empathy for the victims of its heroes’ mission makes Dredd stand out as an action movie. Towards the end, Dredd immolates a dozen gang members with white phosphorous, and it’s played like a horror film. Even Mama’s brief backstory paints her as a bit of a tragic figure by the end, but the most screen time is given to her tech guy, whose eyes she ripped out and replaced with robot ones so he’d make a better slave.

When Dredd and Anderson catch him at the end, Dredd almost kills him for aiding Mama, but Anderson refuses to allow this and lets him go. It’s the culminating moment of her development, deciding that the letter of the law is wrong and that justice requires an empathy and forgiveness the system lacks.

Interestingly, the film was criticised by fans of its source material for lacking its pitch black satire, but it’s really just a different take on it. Science fiction is an inherently satirical genre. It exaggerates and literalises aspects of modern life for the purpose of commenting on them, which is the definition of satire. What defines it as science fiction is that these exaggerations are done via metaphors rooted in speculation about current technologies. The real difference between the Judge Dredd comic and this movie is not that the film is less satirical, but that it abandons the comic’s humour and exaggerated style, in favour of a subtler approach based in making its visuals and imagery resemble real life.

That’s not to say its satire is particularly deep. It doesn’t extend much past a general nihilistic statement on its subject matter. The racial basis of the War on Drugs is left unexplored, to the point where race does not even seem to exist in Mega City One. With this lack of exploration comes an inability to see any way out of this situation. Dredd sees the modern War on Drugs as an inexorable part of modern America. There’s no change or evolution, no matter how many minor or moral victories are won, just an endless cycle of violence and oppression in the name of law and order.

Dredd ultimately serves as a snapshot of a world which has normalised this worldview. It takes the basic structure of the buddy cop movie, which in everything from Bad Boys to Zootopia thrives on the heroic image of the wildly unethical police officer, strips it to the bone and plays it out in a world in which militarised police and massive drug bust bodycounts are unremarkable. It reflects the banality of the modern American police state, which is now just part of everyday life, along with football, apple pie and mass shootings. People die, life goes on, and nothing seems to get any better.

Review: MUTE Previous
THERE WAS AN IDEA... The Hulk As Metaphor For The Asian... Next

DREDD and the War on Drugs

The human cost of law and order.