Does It Look Like It’s Our First Time? GOLDENEYE

It's the Bondiest Bond film of all! 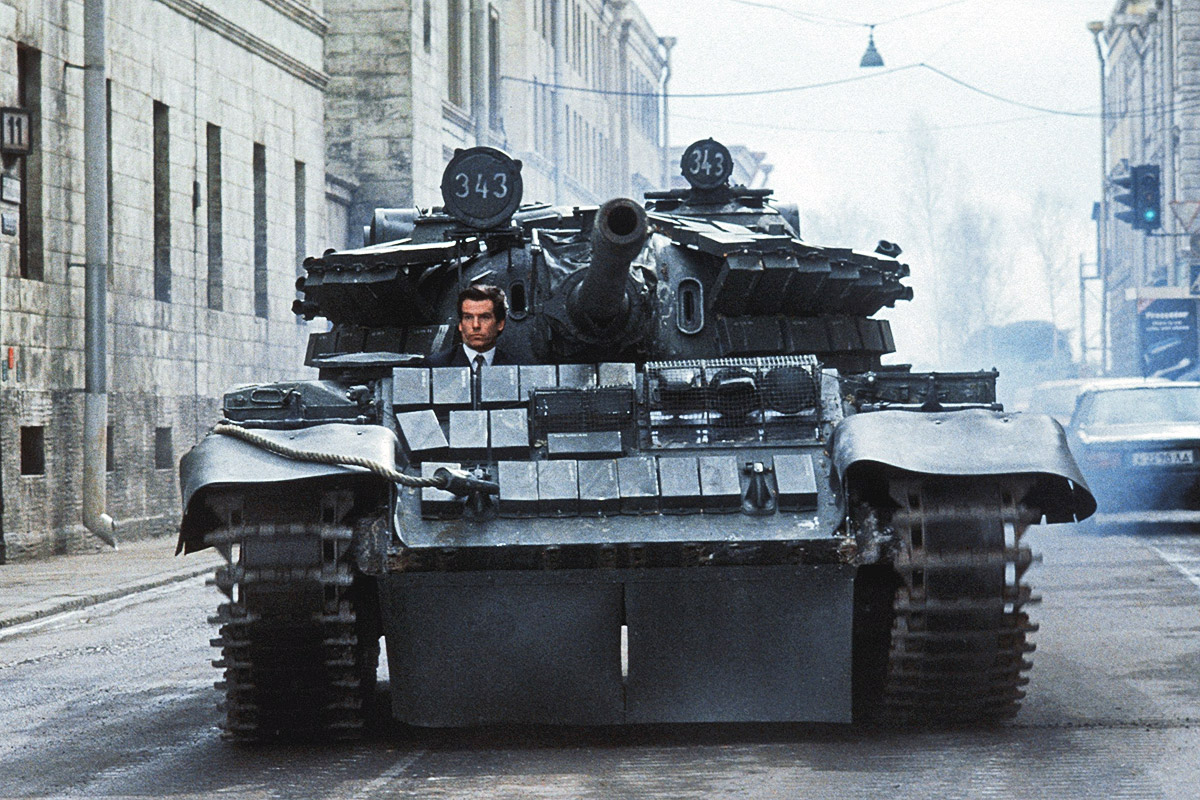 Let’s get real for a moment. The James Bond series is full of stinkers. I mean absolutely loaded with them. Even as a hardcore fan of the series, I can legitimately only claim to truly love about seven of the 24 films and I probably outright cannot stand a good half of them. For the most part, the general dearth of quality was a non-factor in the popularity of the series. It survived without putting out more than two decent entries in a row for decades. Unfortunately, this eventually took its toll. Even the relatively solid entries by Timothy Dalton could not salvage the now actively sinking ship of the franchise. By 1995 the series was in trouble. Enter Goldeneye and Pierce Brosnan in his debut performance as the fifth actor to take on the role of James Bond in the official canon. Goldeneye proved to be a shot in the arm for the franchise that while only temporary, probably saved the franchise from going under.

While not necessarily a bold reinvention of the franchise, Goldeneye served as a trimming of the fat for the formula that synthesized the most effective elements of the franchise up to that point. It didn’t do away with the gadgetry and the puns of its predecessors, but it seemed self-aware enough not to stumble head on into the parody that some of the later installments of the Moore Era had become. While not as brutal as Dalton or minimalist as Connery’s best, it grounded the franchise ever so slightly, so that the world we saw on the screen bore at least a passing resemblance to our own. It isn’t the best Bond, but it is, as I’ve heard many describe it, perhaps the idealized version of the Bond formula brought to life, drawing elements from the entire history of the character to synthesize something ever so briefly new.

It starts with the cold open, which is quite unlike pretty much every cold open to come before it. On a super secretive mission behind the Iron Curtain, Bond and fellow Mi6 agent 006 (Sean Bean), also known as Alec Trevelyan, undergo a daring attempt to sabotage a Soviet chemical weapons plant, only for the mission to go horribly wrong leaving Trevelyan dead and Bond desperately fleeing for his life before escaping on a commandeered plane. On its own this isn’t completely revolutionary but the way the film builds upon it is. The entire film builds off of this singular moment in a way that no Bond film before it had. Because it turns out that gasp Trevelyan didn’t die, and his anger towards Bond and Britain for leaving him behind sets him upon a path for vengeance. Despite the relatively large stakes that would begin to unfold, there is a personal nature to the overarching plot of this film that many in the series lack. Sure many a villain came after Bond because he interfered with their plans, but few have ever hated him as viciously as Trevelyan does.

Trevelyan is in many ways the ideal Bond villain. Like Red Grant and Scaramanga before him, and the villainous Sylva of the yet to come Skyfall, he prevents the audience with a dark mirror of our hero, a villain with all of Bond’s talents but without the benefit of his (admittedly narrow) moral compass. He uses his skills and resources to hijack an orbital EMP weapon, which he plans to use to black out London in the immediate aftermath of a planned electronic robbery of the Bank of England. Thus he plans to gain vengeance on Britain for abandoning his people, the Cossacks, to the mercy of the Soviets in the aftermath of WWII. Alongside him are Russian Colonel Ourumov (Gottfried John) , hacker and general pervert Boris Grishenko (Alan Cumming), and the not at all creatively named Xenia Onatopp (Famke Janssen), a former Soviet fighter pilot who, sighs in exasperation becomes aroused by the act of killing people and has a habit of crushing men to death with her thighs. It is by far one of the more memorable assemblages of villains in any given Bond movie and you have to give them bonus points for the truly bonkers plan.

As indicated above, the Bond women in this film are a bit of a mixed bag. While Janssen goes all in with her performance as Xenia, she’s portraying perhaps the cringiest female character in the history of the franchise. The true female lead, Natalya Simonova (Izabella Scorupco) is a Russian computer programmer who gets caught up in this vast conspiracy and stumbles head first into Bond while fleeing for her life. While not necessarily the best of the Bond girls, Scorupco is given multiple chances to show off her acting chops and does manage to be directly responsible for saving the day and stopping the EMP. It’s also worth noting that this is the film that introduced Judy Dench as M, a role she would portray in seven films and own like nobody before or since.

While it doesn’t reach the heights of the Craig era in terms of stylized violence, the action in Goldeneye is a sight to behold. There are many fantastic sequences to choose from, including the final confrontation between 006 and 007, but the highlight of the film has to be the tank chase through the streets of St. Petersburg. After 006 captures Natalya, Bond hijacks a tank and gives chase, pancaking cars and startling Russian civilians in a daring sequence the likes of which the franchise had never seen before. To top it all off this entire sequence occurs with Bond in a full suit and tie, adding just the right edge of whimsical to the proceedings.

The gadgetry in this one is actually peeled back a bit. Pretty much every device used by Bond in this film feels at least somewhat realistic. From a watch/detonator, to an exploding pen, everything serves an actual practical purpose and feels of this world, something the Brosnan films rapidly moved away from. Plus they provide us with one of the most intense pen clicking sequences ever, so there’s always that.

The music in this one is honestly disappointing. While the theme as composed by Bono and The Edge and performed by Tina Turner is fine, the rest of the music feels incredibly dated in the way that most 90’s action scores were. When you combine this for the fact that unlike almost the entirety of the franchise before and after it, the score fails to incorporate the theme song, you’re left with an overly bland and synthy soundtrack that isn’t going on anyone’s all-time list.

Bond in this film isn’t the best he’s ever been, but he’s pretty good. Brosnan manages to walk a unique tightrope that places him squarely at the epicenter of all of the Bonds before him. He’s an amalgam of the previous four actors and it works to his favor as he’s able to play with the wit of Moore’s Bond while still leaning into the action hero edge and youth of Connery and Dalton’s portrayals. He’s just a bit to pun heavy for my taste but all in all it’s a well rendered performance that serves up a Bond that’s pretty hard to hate.

As I said above, Goldeneye isn’t the best Bond. I don’t even think it’s in my top three. What it is though is about as pure of a distillation of the franchise formula as one will ever see. The Craig films may hit higher highs but they did so by breaking the formula, and the Connery films did so before the formula was truly established. If I want to show someone the best Bond movie, this probably isn’t my choice, but if I want to explain what a Bond movie is to someone, this would be the first film I would reach for.

Monkey Planet: The Birth of PLANET OF THE APES Previous
The Bus Stops Here: Podcast of the Apes Next