Does It Look Like It’s Our First Time? Revisiting THUNDERBALL

It's a Bond movie alright! 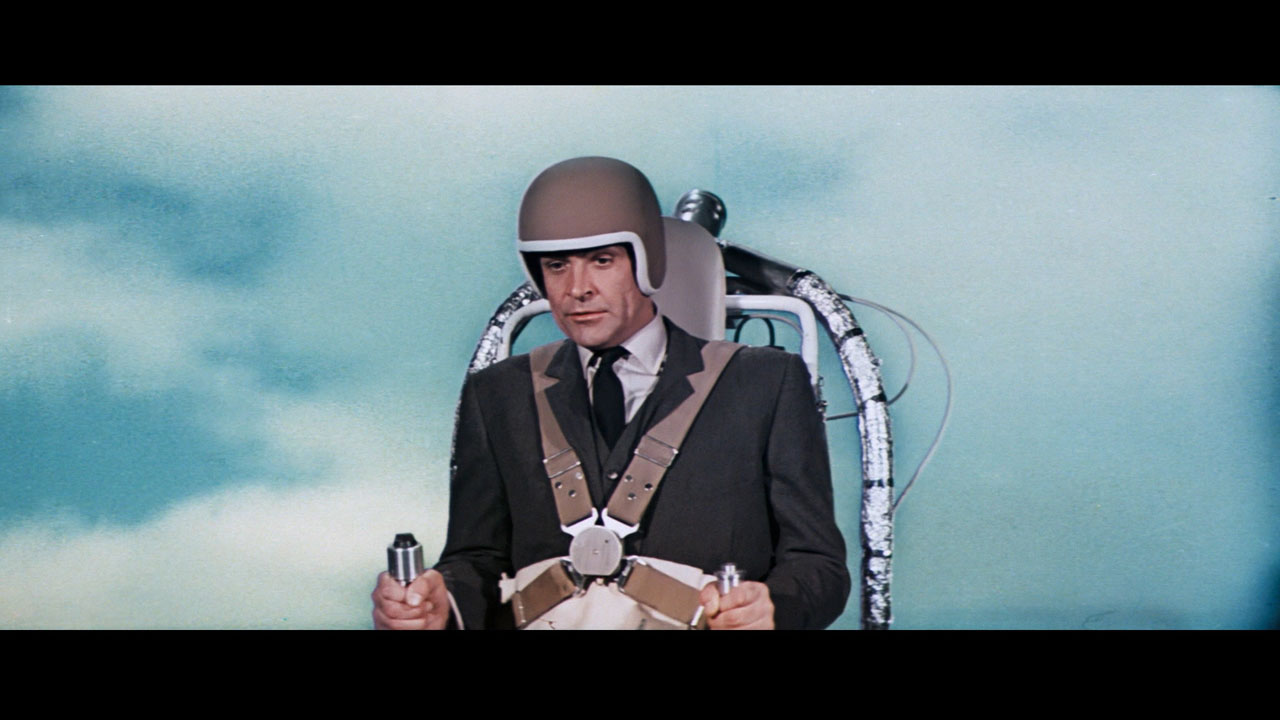 Welcome back once again Bond fans to another rousing edition of “Does It Look Like It’s Our First Time?”.  Unfortunately before we begin, I have some sad news to report. While CJ was indeed successful in his fearless attempt to rescue me from the clutches of SPECTRE, I am sorry to say that he was severely injured in the undertaking. No worries though, we’ve shipped him off to a health spa, where he is recuperating at this very moment, and he should be able to rejoin us on our adventure soon! In his absence I will be running this week’s article solo, so let’s dive on in to Thunderball!

In many ways Thunderball is really the first classic Bond film and that includes the cold open and opening credits. The Thunderball cold open is honestly a classic in the way it brilliantly ramps up until reaching its conclusion. As the film opens we lay witness to a coffin with the initials JB on it in the middle of a funeral, and for a split second we think “Is Bond dead?”.  Worry not however, 007 is alive and well and the JB in question stands for Jacques Bovar, a man Bond was tasked with killing until he fell ill and died before Bond could reach him. Bond follows the man’s widow to a mansion, only SURPRISE, it’s not his widow, it’s Bovar in disguise! This is followed with one of the best fights of the series by far and by Bond, after finally killing Bovar and completing his mission, escaping via jetpack. It’s a brilliant blend of realism and absurdism and one of the very best sequences in franchise history. The opening credits reflect the plot of the film by adopting an underwater theme as the credits scroll across the bodies swimming women and men with spear guns, setting up the general plot of the film in a way that would become a franchise hallmark. Also worth noting is the fact that Thunderball is the first Bond film to actually feature the actor portraying Bond in the gun barrel sequence at the beginning of the film.

While not as thematically varied as that of its three predecessors, the music of Thunderball is still incredibly well put together. The main theme by Tom Jones, which shares its name with the film, is truly one of the classic Bond themes, and the score does a decent enough job setting the mood.

Thunderball is arguably the first Bond film to feature a truly classic example of a Bond plot. In this instance SPECTRE has through an absurdly elaborate scheme managed to steal a strategic bomber with two atomic bombs onboard and demand 100,000,000 Pounds from Nato in exchange for return of the bombs, threatening an attack on a major city in the US or UK if they do not get their way. Bond is thus sent in to stop them. Along the way he seduces the niece of the villain and the story culminates in a giant underwater battle. It’s exactly the kind of absurd plot that became the hallmark of the series and manages to decently propel itself along, even if it does feel to fizzle out near the end.

The villains of Thunderball are very much a case of style over substance. Emile Largo, also known in the film as SPECTRE Number 2, is not what one would call a carefully crafted character. While his evil plan is quite massive and absurdly intricate, the presence of the greater SPECTRE hierarchy often leaves it in question as to how responsible he truly was for concocting it and he poses no physical threat whatsoever for our hero. That being said he does have a few rather fun and stylish traits to him, namely his eye-patch/ascot combo and the fact that he keeps vicious sharks in a swimming pool as pets and feeds those that displease him to them. Beyond that however there simply isn’t that much to the character that makes him stand out.

Following in the grand tradition of all of the Connery films, the Bond Girls in Thunderball don’t really serve much of a thematic purpose beyond looking pretty. Bond’s CIA colleague Paula Caplan (played by Martine Beswick) serves no purpose in the film other than to be captured and commit suicide, seemingly to show how crafty the villains are. For the third time in the first four Connery films, the primary Bond Girl, in this film Domino, is portrayed by an actress who had to be dubbed because she could not speak clear enough English for the audience to understand her. And while Claudine Auger is quite beautiful, it’s pretty telling that once again they hired an actress who literally could not intelligibly read her lines. As usual for the early films, there’s a lot of style there, but not an abundance of substance. Lastly there’s Lucianna Paluzzi as the villainous Fiona Volpe, but apart from spearheading the capture of Paula, she doesn’t really do that much and eventually dies in a failed attempt to kill Bond.

Sean Connery is back once again in this film, however it is worth noting that the sleepwalking that his later entries are known for starts to peak through in this entry. While he is not in full on check cashing mode in this particular performance, he isn’t attacking the role with the same enthusiasm that he brought to his  earlier entries, something that would prove to be characteristic of the back half of his run.

As I said before this is in many ways the first classic Bond film and that carries over to the gadgets. Thunderball is the first gadget heavy Bond film, and the first time the films really started to traffic heavily in technology that did not exist, at least not in the forms presented. Included in Bond’s kit in this film were the aforementioned jet pack, a watch with a Geiger counter, a radioactive pill that allows MI:6 to track the person that swallows it, an underwater infrared camera with a Geiger counter, and a rebreather device. This is the film that really kicked off the absurd gadget escalation that would eventually become part of the formula that almost killed the franchise.

The stunt work in Thunderball is a bit of a mixed bag. While some of the early fight choreography and sequences stand among the very best of Connery’s run on the character, some of the later bits leave something to be desired. The climactic underwater battle in particular feels like an instance of ambition wildly outpacing the actual choreography and work being put in as the truly bold idea of an extended underwater fight gives way to a rather muddled scene of men shooting spears and flailing about. Still, you have to give them points for trying.

Thunderball after an extended sequence at a health spa (a franchise staple) spends most of its run time in the Bahamas both in and out of the water. We’re treated to a wide variety of Bahamian culture as well as several absolutely gorgeous diving shots as the film makes good use of the water surrounding the islands.

Beyond the first ever usage of a Bond actor in the gun barrel sequence, and the underwater combat, there’s not much truly iconic about this entry in the Bond franchise. The only other sequence that springs to mind is the jet pack sequence in the cold open, as it was really one of the first moments in which the franchise began to traffic in science fiction with the gadgetry.

While it doesn’t traffic in the casual racism or exoticism of the earlier entries, it’s hard to miss just how rough the sexual politics of Thunderball are. Arguably more so than any of the three previous films, it treats its female characters like props in the story rather than actual characters with agency and thoughts. Combined with the mystifying decision to once again cast an actress that could not coherently read her lines, it serves once again as a stark reminder of the often rotten core of this franchise. I love these films, but boy are they rough sometimes.

While not reaching the same highs as any of the three films before it, Thunderball may still be more identifiably a James Bond film than the other as it is truly the first film in which all of the elements that we associate with the franchise coalesced to form the identity with which the films are associated today. It’s not an especially great film, but it is important nonetheless and does feature some of the better technical craft of the early entries.

Ghost in the Shell Review Previous
Review: THE DISCOVERY Next