Does It Look Like It’s Our First Time? SKYFALL

Craig's 3rd Outing is the Charm 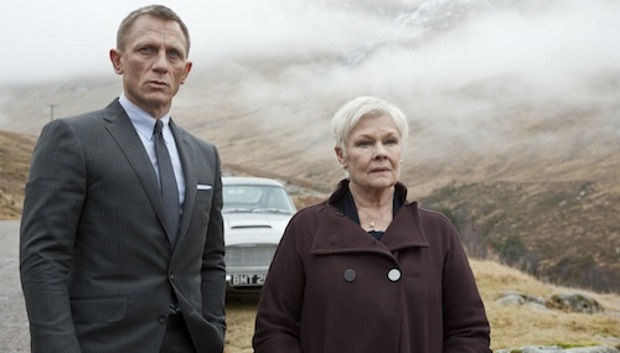 Hey there and welcome to our penultimate entry in “Does It Look Like It’s Our First Time?”. Today we take a look at one of the most popular entries in the series and the film that inspired the name of this review series: Skyfall. I will admit that I am a bit biased as this is without a doubt my favorite Bond film.

We open with what has got to be one of the greatest chases in the series’ history as Bond and Moneypenny pursue Patrice, a mercenary who has managed to get his hands on a hard drive that contains the real identities of MI6’s undercover agents. The chase takes us down crowded city roads, over city rooftops, and onto moving trains. This exciting chase eventually ends with M (once again played by the ever-amazing Judi Dench) ordering Moneypenny to shoot at Patrice who is fighting Bond atop the train. However, Moneypenny misses and shoots Bond, sending him careening off the train into the water below and to what appears to be his death while Patrice gets away with the hard drive.

We then proceed into the opening credits as Adele’s “Skyfall” serenades us. It should be noted that the song would go on to win the Oscar for “Best Original Song” as it should have. The music for this movie is fantastic. The way Thomas Newman seamlessly works the theme into his score is incredible. Newman is an incredibly talented composer who should be a household name like John Williams.

After the credit sequence, we cut to M being summoned to the office of Gareth Mallory (played by Ralph Finnes) who leads the Intelligence Committee for parliament. After the loss of the hard drive and Bond’s presumed death, M is forced into retirement. On the way back to MI6, M’s laptop is hacked, leaving the message “Think on your sins”. Immediately after MI6 is destroyed in an explosion. We later find out the explosion was a hack orchestrated by Raoul Silva a former MI6 agent who M had turned over to China in exchange for some captured agents.

Silva is most definitely one of the most, if not the most, interesting villains in the entire series. Never have we had a villain so emotionally invested in his mission. Here we have a man whose sole purpose is to destroy the woman who destroyed his life. His training as an MI6 agent makes him incredibly dangerous and the most formidable foe. However, it isn’t his training that makes him so dangerous, but his dedication and the lengths he will go to to destroy M. Nothing is more dangerous than a person who has nothing to lose.

It’s safe to say Skyfall is the most personal Bond film. The themes of loss, aging, and revenge are prevalent throughout the movie. However, if I had one complaint about the film it would be that sometimes the themes are about as subtle as a knife to the back. Unfortunately, it’s hard to discuss in detail these themes without getting into spoiler territory and it is my personal philosophy that one should go into the Craig films with as few spoilers as possible.

Speaking of Craig, he really came into the role of Bond. His acting is superb as always, he knows his way around an action scene, and he somehow has even more charisma than his previous two films. However, what makes him stand out in this film is he’s given a challenge that none of his predecessors had to deal with. He has to approach the role from a different angle. He’s no longer a spy. He’s a man who has to protect the closest thing to a mother figure he has all while dealing with his age and the thought that maybe this life is no longer suited for him.

As I mentioned before, when it comes to this movie I’m biased. However, looking at this film with an unbiased eye I would still feel comfortable in saying that would easily be placed in the top 3 Bond films. The action is great, the dialogue is top notch, and the writing is as good if not better than Craig’s previous two entries. While there are some things that don’t work or could at least be improved on, it’s safe to say that this isn’t just one of the best Bond films or spy films, but one of the best films of the past 20 years and definitely one of the best of Craig’s entire filmography.

That’s all for this week. Come back next week as we wrap up this series with the most recent Craig outing, Spectre. God help us.

Stream of Consciousness: SHIMMER LAKE Previous
TOMB RAIDER Trailer Has Lots of Jumps and Grunts Next