Looking Back on SCANDAL 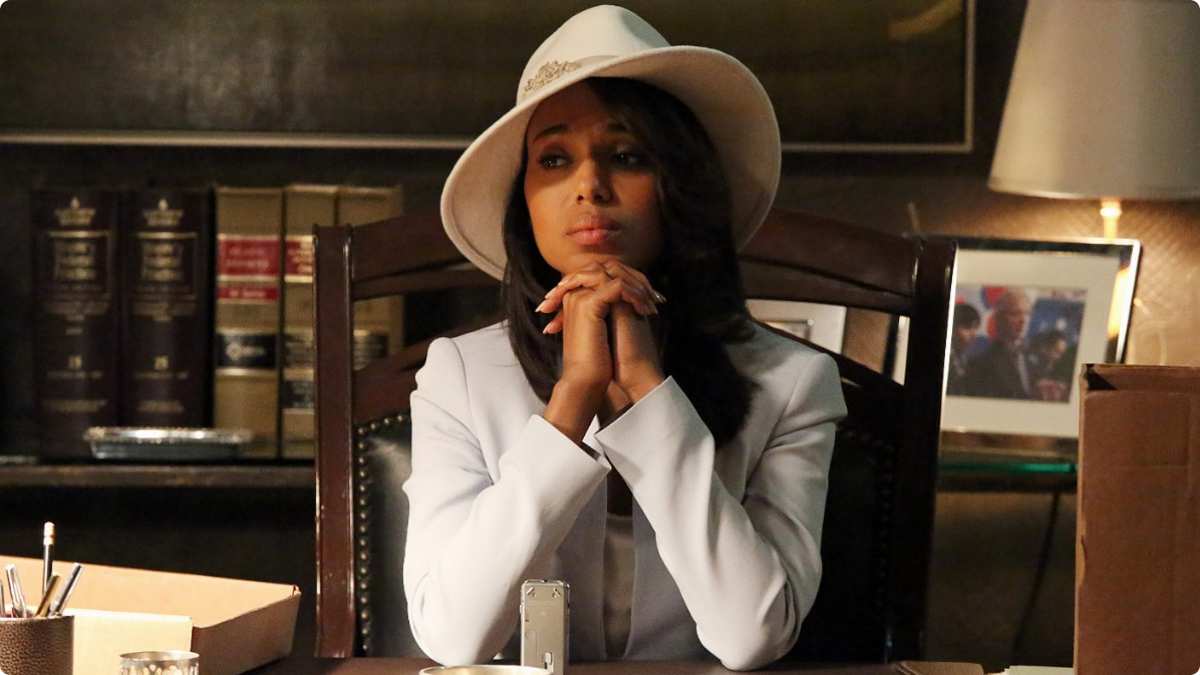 Do you wear a white hat?

This question has always been at the center of Scandal, which wraps up its 7-season tenure tonight. More importantly, it’s been the guiding question for Olivia Pope, one of the most revolutionary protagonists to have graced our televisions. Created by Shonda Rhimes and played by Kerry Washington, Olivia embodied the idea of a complex woman, unafraid to wield her power and influence to benefit herself, her loved ones, her country, or conversely, to use it to destroy all of the above.

The white hat is literal and metaphorical, and it stands for how Olivia’s soul has been on the line these past 7 years. She embraced heroism and villainy out of necessity, to get what she wanted. For example, the first major bombshell of the series culminated in the reveal that Olivia, Cyrus, Mellie, and their allies rigged a presidential election to put Fitzgerald Grant III (Tony Goldwyn) into office. Olivia, in an affair with Fitz before the start of the show, believed she was a patriot in service of a patriot. She believed their steady march to the Oval Office was just. At the center of this group of conspirators, Olivia showed how much she wanted power, for herself and the man she loved.

When it came time for Olivia to make hard choices, she did so with aplomb even when it didn’t seem to suit her and she dirtied her white hat with ambition and desperation. A late series arc revolved around Olivia presiding over B-613, a covert intelligence agency. She commanded and committed crimes so horrific that election rigging was like a minor traffic violation.

Hollywood has a hard time showing us that women are complex. What ends up on screen is paradoxical – networks want to appeal to everyone but their characters end up too generalized to be for anyone at all. Shonda Rhimes understood innately that specificity was important to storytelling, and that once you had a compelling protagonist, women would follow you anywhere. Kerry Washington, as Olivia, put in the performance of a lifetime. Olivia’s strength, vulnerability, bravery, and brilliance are all because Washington is a formidable actor who draws the scene to her. She is the center of the Scandal universe not only because she’s the lead actor but also because she has created a character who demands your attention.

I am definitely not Olivia. My experiences as a woman of color are not her experiences, and I can power lunch all I want but it isn’t going to change democracy. I have also never murdered anyone, which is not something I can really say about anyone on Scandal. But I felt a kinship with Olivia, not only because she frequently aspired to do the right thing and stand up for people who needed help, but also because Olivia was ride or die. She saved Quinn and David from being accused of murder, saved Abby from her abusive ex-husband, and saved Huck from a lifetime of being a traumatized vet on the streets. She kept the highest seat in the land open for Fitz because she is ride or die. She escaped the trenches of Washington for a tropical island, and brought Jake with her because he needed saving (also, because he’s very hot and islands are lonely places). She chooses to leave paradise and love, and returns to Washington anyway, because someone needed her and Olivia sacrifices when she has to. Because that’s who she is.

It’s so easy to dismiss Scandal as “just” a soap. Olivia and Scandal are revolutionary because the show was unapologetic about placing a powerful black woman at the center. It’s a recurring premise in Shondaland, from Bailey in Grey’s Anatomy to Naomi in Private Practice to Annalise in How to Get Away With Murder. Scandal didn’t ignore women’s desires and needs; it embraced them and weaponized them in full-throated, dramatic, massive monologues!

Here are just some of the fantastic things this show has given us:

Olivia’s clothes are her armor. She is fond of luxurious fabrics and textures, a relatively monochromatic palette, and she is always, always carrying a beautiful handbag. The white hat, now an icon of the show, appeared in the first episode. David Rosen bought her that hat to remind her to stay on the path of truth (even if he eventually cheated his way to the Attorney General’s office – love you, David!). Scandal’s fashion, thanks to Olivia, became so iconic that Saks Fifth Avenue and The Limited both debuted lines in partnership with the show. Women everywhere embraced the simple lines and regal drapery of a good wool trench and a well-constructed bag.

Team Olitz or Team Olake? On one side is Fitz, leader of the free world. He feels nothing for his wife, but he won’t leave her because Mellie would tank his presidential legacy. He also killed Olivia’s mother (it’s a long story, and murder is not a dealbreaker on this show). Tony Goldwyn is magnetic as Fitz. He’s sympathetic, upsetting, and full of passion and frustration.

On the other side is Jake, a U.S. Naval intelligence officer, former head of B-613, and trained assassin (and he’s head of the NSA, former White House Chief of Staff, and somehow had time to be promoted to an Admiral?). Another Shondaland regular, Scott Foley played Jake with an everyman quality and an undercurrent of menace that was both attractive and dangerous. He would flash his smile, and you would know why Olivia had to choose him. He’d shoot a man and sit with him so he didn’t die alone, and you would know why Olivia needed to stay away.

While Olitz was a passionate fire that hurt anyone who got too close including those involved, Olake was a simmering hot pot of love based on dependency, shared trauma, and Jake’s abs.

By now you’ve likely heard of or seen the clip of the famous Sally Hemmings/Thomas Jefferson scene. It’s pure fire. Neither men are really good for Olivia, but she isn’t good for them, either. Still, I should go on the record as being Team Olake don’t @ me.

Scandal has never shied away from the racial dynamic between Fitz and Olivia. These two argue often, and a common theme during their fights is an uncomfortable allusion to property and race, an overt link to enslavement. It’s never more clear than in the Sally Hemmings/Thomas Jefferson scene, but it comes up again and again. It also comes up between Olivia and her father, who created a soldier when she only wanted to be a daughter.

No character lived in the political trenches more than Cyrus Beene, played by Jeff Perry, a Shonda Rhimes regular. Perry brings enormous amounts of gravitas and bluster to his role. It’s tempting to think of Cyrus as one-dimensional, a mustache-twirling political animal. In actuality, Rhimes, Perry, and the writers showed that Cyrus is a man broken by his own political system. In one poignant moment early in the show’s run, he acknowledges that though he knows in his gut that he was meant to be president, being gay (and a Republican) means he will never achieve it. As Chief of Staff, he can still wield the presidency in his hands. He could have something, even if it will cost him his husband, child, and morality. Cyrus is a monster, and I still want him to be president.

6. Republicans we can root for?

I admit, this is a low blow. It was a curious decision to make Fitz, Cyrus, and Olivia Republicans. The show never really went into why these three embodied the inclusion, feminism, and representation we expect from Rhimes’ shows and who were also—at least, on paper—conservatives. Fitz even has a Black Lives Matter poster. Maybe that’s why they had to steal an election?

I’m going to miss Scandal. It was high drama, high stakes, full of enjoyable actors who yelled, schemed, and ranted their asses off every week. As a Shondaland diehard, I am forever grateful to Shonda Rhimes, the showrunners, writers, producers, actors, and crew for putting a show like Scandal on the air every year.

Shonda Rhimes brought to paper and screen a resolve to understand complex women, but most importantly, to let them exist fully in their complexity. Within fiction, we as an audience hope to glimpse more authentic versions of ourselves and gather in our fists a shred of hope that we will be better people tomorrow. In Olivia’s case, it’s to put on the white hat again, or to dream about making jam in Vermont with Fitz, or lay on a beach with Jake. She had all those things, and perhaps she can have them again.

There Was an Idea... Galactic Family: The Beating Heart... Previous
Phoenix Film Festival Review: BLINDSPOTTING Next

Looking Back on SCANDAL