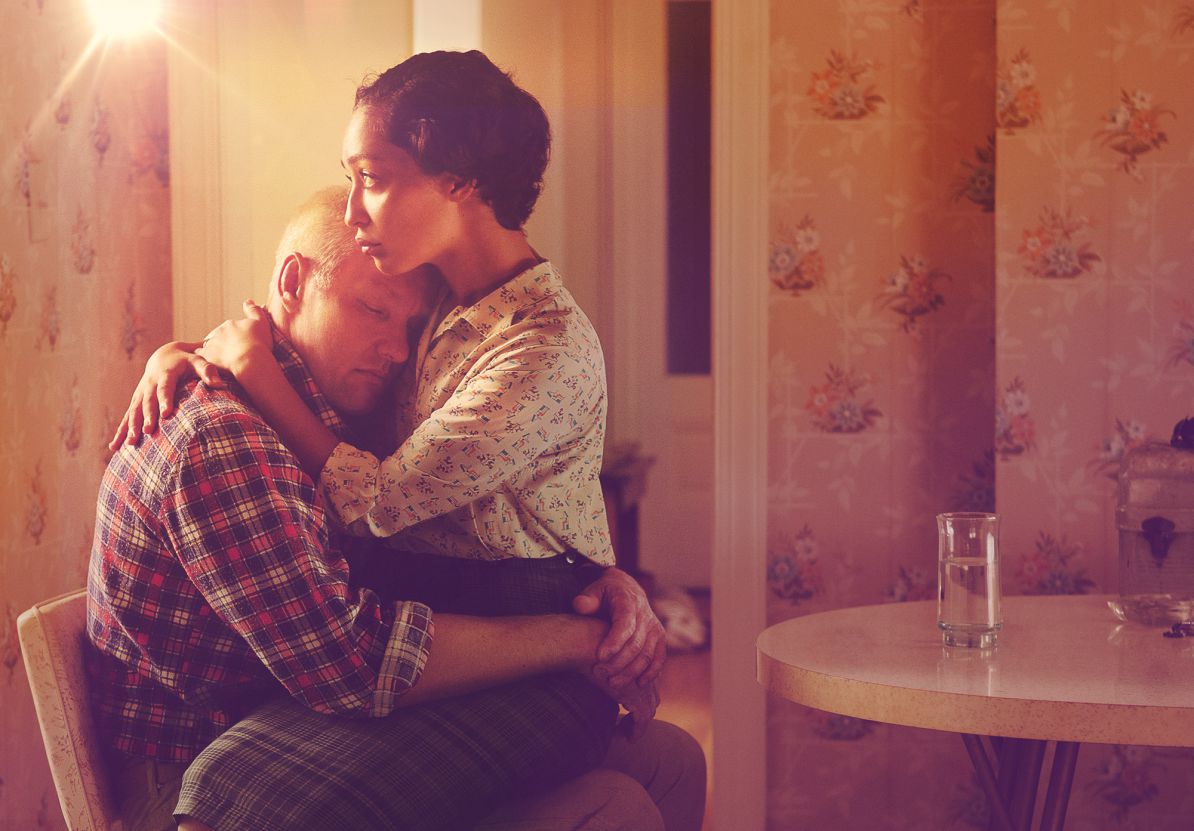 Loving is Jeff Nichols’ telling of Loving v. Virginia, the Supreme Court case that overturned regional laws forbidding interracial marriage. Mildred and Richard Loving were briefly imprisoned and ultimately banished from their home state of Virginia for the sin of loving each other. The title is a bit daft in its obviousness, but it does establish the lens via which we are meant to view this landmark case. We don’t meet any other couples, or really get a sense of the implications of the case for the wider world. We don’t need to. This is an intimate film that builds extraordinary empathy for its core argument by examining one family’s life as they confront codified hate.

Loving is set in the 1950s and 1960s in rural Virginia, a gorgeous, humid flatland of grassy meadows and dusty roads. Ruth Negga and Joel Edgerton carry this emotionally complex, barely-contained hurricane of a drama with sensitive performances that play beautifully off one another. They are always hiding, always boxed into their homes by a world that chooses to make enemies of them. Negga’s Mildred is a force of nature, an unstoppable champion for her own humanity and right to love. Egerton’s Richard is perpetually overwhelmed by social hostility, and relies on his wife’s unflappability to carry them through to the life that they deserve, and to create a better world for their children.

I take this story personally. It’s difficult to fathom that, just a few years before my birth, interracial marriage was illegal across much of the nation. My own marriage, had we been born and fallen in love just a few short decades ago, would have landed us in prison if we crossed the wrong state lines. The notion that a government body could try to interrupt something so sacred as a partnership, a coupling, is obscene. That race or sexual orientation or religion or any categorical criteria has ever been held up as justification for denying access to love is, or at least should be, unfathomable.

As we watch our present national crisis unfold, we are of course reminded that the Constitution (never mind pre-Constitutional human decency) means fuck-all to a shockingly large percentile of our population. The moment in history portrayed by “Loving” is as relevant now as it was even before the laws were overturned; many of the more shoddily-brained of us enjoy the absurd complaint that civil rights are irrelevant now because, in their tiny view of things, we live in a “post-racial society.” These awful people have had a particularly harsh light beamed back on them and exposed the lie of their assertions. “Post-racial,” as with “political incorrectness,” is code for “I can treat other humans as poorly as I like.” The harder we try to ignore each other’s differences, the more aware – and less tolerant – we are of those differences.

This film does represent the ideal of “colorblind” love to an extent. I hate that word, “colorblind.” In a racist society such as ours it mostly represents willful ignorance. However, there is an achievable goal here, an end toward which we should all strive, and the Lovings represent that end: they are acutely aware of their differences, and adore each other both because of, and despite, those differences. This is what wrong-headed post-racialists can’t grasp: to transcend race, you must love and accept race as part of the texture of our beings. Failing this, our racism will always define us.

Ruth Negga has been widely, rightfully praised for her portrayal of Mildred Loving. Her Mildred is a bold, socially skillful woman whose strength carries her family through hell. Negga’s great expressive eyes do much of her work, shying and recovering and, when all is well, relaxing into a weary smile. Joel Edgerton, who I last watched in his own film “The Gift” as a demented scene-chewer of a villain, is here so reserved as to occasionally disappear completely into his own silence. His stoic resolve gives him the strength to follow his wife to the end, only cracking when their delicate life on the edge of the law begins to wobble. They are a remarkable pair, believable and moving throughout the film. They power the film, and Nichols is wise to let them shine.

It’s an imperfect film. Its narrative point-of-view shifts awkwardly and unnecessarily once we begin to see the Northern nation take notice, when the ACLU and Time Magazine realize what glory is to be had in the publicizing of the case. Michael Shannon has a delightful and sympathetic turn as a well-intentioned photo-journalist. He humanizes the great big hungry world, but of course serves a commercial interest. Their lawyers, their hearts in the right place, can barely contain their excitement at the idea of presenting to the Supreme Court. Their scheming is frustratingly petty and predictable. There are villains here, racist police and judges and townsfolk, and on one hand I respect the film’s unwillingness to grant them more than a dimension or two because, you know, fuck ’em. They do play flatly against the film’s strengths, however. This need to vilify entrenched beliefs certainly defines the social conflict of our day as well; those of us whose biases are oriented to civil rights have a hard time seeing our political opponents as anything more than hateful assholes, playing on deeply-held fear of the “Other.” In a sense, I want art to do better, to help me understand why these people feel as they do. This is probably a lost cause. I do not empathize with hate, and nor does this film.

I’ve said enough. This is a powerful film, well worth watching for Negga and Edgerton, and for the reminder that we are still, despite protests to the contrary, deep in shit. Racism built our country, and our country continues to thrive on racism. We have far to go.

Things We're Digging This Week - Week of 2/27/17 Previous
Does It Look Like It's Our First Time? Revisiting DR.... Next

Planet of the Racists

The Cringe-Inducing Insanity of YOU ONLY LIVE TWICE

The movie that tried to make Sean Connery Japanese