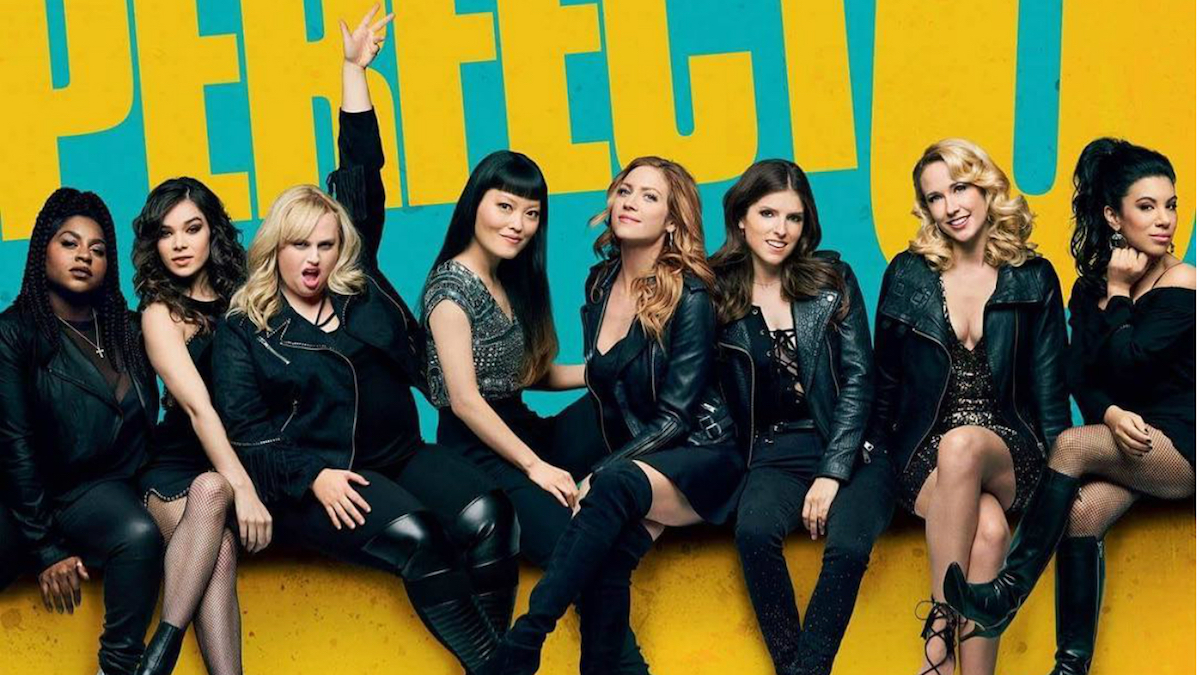 The original Pitch Perfect is a modern comedy classic. Part raunchy college movie, part musical comedy, part sports movie, Pitch Perfect has that alchemical mix of absurdism and pop energy that not only keeps you laughing, but invests you in the characters on screen and their challenges and growing camaraderie. And just like many classic comedies, the film gave birth to a disappointing and aimless followup that largely squanders the goodwill engendered by the first entry.

Pitch Perfect 2 nails exactly one thing during its breezy runtime in delivering a believably capable and formidable challenge for the Bellas to face off against in their European counterparts, Das Sound Machine. At the cost of comedic interplay, energetic musical numbers (by our heroines), and anything approaching the kind of group narrative or engagement of the first film, Pitch Perfect 2 still delivers the goods in giving you some great villains, whose musical prowess results in sequences you want to revisit over and over on Youtube. If nothing else, Das Sound Machine made a Muse song actively not terrible, which ought to net the film a Grammy, or a Nobel Peace Prize, or something. In abandoning the focus of the first film on imaginative musical arrangements, and how the Bellas work together as a group to achieve them, we were left with a meandering and plotless hang-joint, hinging on an unearned emotional climax simply not up to the challenge laid down by the Sound Machine1. Adrift in a rehashed version of the first film’s plot, we would at least treasure a little time with our favorite characters, if only they were given any meaningful interaction. Characters drift in and out of scenes with little dynamic beyond their natural chemistry together.

In Pitch Perfect 3, our favorite troupe finally manage to wrest back a little of that shine that made us love them in the first place, even if the story itself works against them at nearly every turn. Problems inherited from both Pitch Perfect 2 and the very nature of comedy sequels in general2 manifest accordingly. Once again, manufactured dramas untethered to the larger plot machinations leave us also feeling untethered, and actively diminish the kind of energy and fun we’ve come to expect from the troupe. But even with a story that abandons all sense of reality in places, the Bellas themselves seem to have recovered a bit of that old spark. And some of the flatly ridiculous plot tangents are actually really fun. Fat Amy’s entire side story with her estranged criminal father (a game John Lithgow doing an awful Australian accent) springs directly to mind. The jokes themselves often sing in a way they haven’t since the very first movie, even if the writing isn’t quite up to the same level of cleverness. A visual gag involving a beehive at a swanky party is likely the most ambitious and well executed thing in the film. The problem really comes down to connective tissue. None of any of what is happening fits together in any organic way. If I can boil down exactly what the 2 latter Pitch Perfect entries lack, it’s that scene in the first film when the Bellas are on their way to a competition, and break into a Miley Cyrus song. A scene that establishes a new and joyful dynamic that the film builds upon steadily until the very end.

The bigger problem here is one of stakes. After essentially winning the Eurovision of acapella, where the hell is there left for the Bellas to go? This is a question that Pitch Perfect 3 not so much botches but sidesteps aca-awkwardly. Feeling a bit past their prime in their new, successful individual lives, the Bellas are basically bored and nostalgic for victories past. While the Bellas have moved on to pursue their original post-college dreams (or just kind of dick around), we find our main ladies feeling generally unfulfilled, and grasping at reasons to get the band back together for one last hurrah. Fair enough. The troupe sets off for a globetrotting USO tour, competing with 3 other acts for a chance to open for DJ Khaled. Hijinks ensue. Also, the other groups are kind of mean to them, despite all 3 of them being pretty uniformly terrible. While we get a lot more time to hang with the Bellas, the focus on Beca’s newly found solo aspirations come at the expense of anything meaningful for the rest of the troupe to do outside of Fat Amy, who seems to be establishing herself as the viable spinoff candidate, should Rebel Wilson decide to throw her hat into the action-comedy arena. Add to this that nearly all of the musical numbers in Pitch Perfect 3 are a total snooze, and you have a film that limps along to a fizzle of an ending rather than a satisfying sendoff. I like Anna Kendrick as much as all of you, but 2 films centered on her ambitions without the benefit of either solid ensemble work or crafty writing to carry it through leave me a little cold. Brittany Snow and Anna Camp being all but abandoned, story-wise for the latter 2 entries in the series is a void that is very apparent.

Pitch Perfect gave us a fun and energetic female-led musical comedy that defied odds to become one of the decade’s hands-down best offerings. The perfect mix of absurdism, popping ensemble energy, and pure melodic exuberance on display gave us that rarest of highs, and we needed to chase it. When trying to come up with a comparison point for how these sequels shake out, I keep inexorably coming back to the Rocky series. If Pitch Perfect is your excellent debut, Pitch Perfect 2 seems to be your Rocky II, with just enough highlight in the villain to give you a moment to cheer among the slog. I guess I’d have to make Pitch Perfect 3 my Rocky V, a film far too often unfairly maligned that is nevertheless working with at least a little of the same magic that made you love the endeavor to begin with. While each of the follow-up entries in this series have their pluses and minuses, both films reinforce the notion that it’s just really damn hard to nail a comedy sequel. Given the fact that Pitch Perfect 3 recaptures some of that old feeling, I can’t really bring myself to damn the whole enterprise on a mixed bag.

If you’re firmly in the Bellas’ corner, I think you’ll find something to like. Beyond that, I’m not sure I’ve got a lot of praises to sing. I’ll miss the girls, but I’m glad for the time we got to spend together.