Shooting the System in the Head in JOHN WICK: CHAPTER 2

Well, wrestling it to the ground and lining up the headshot, at least... 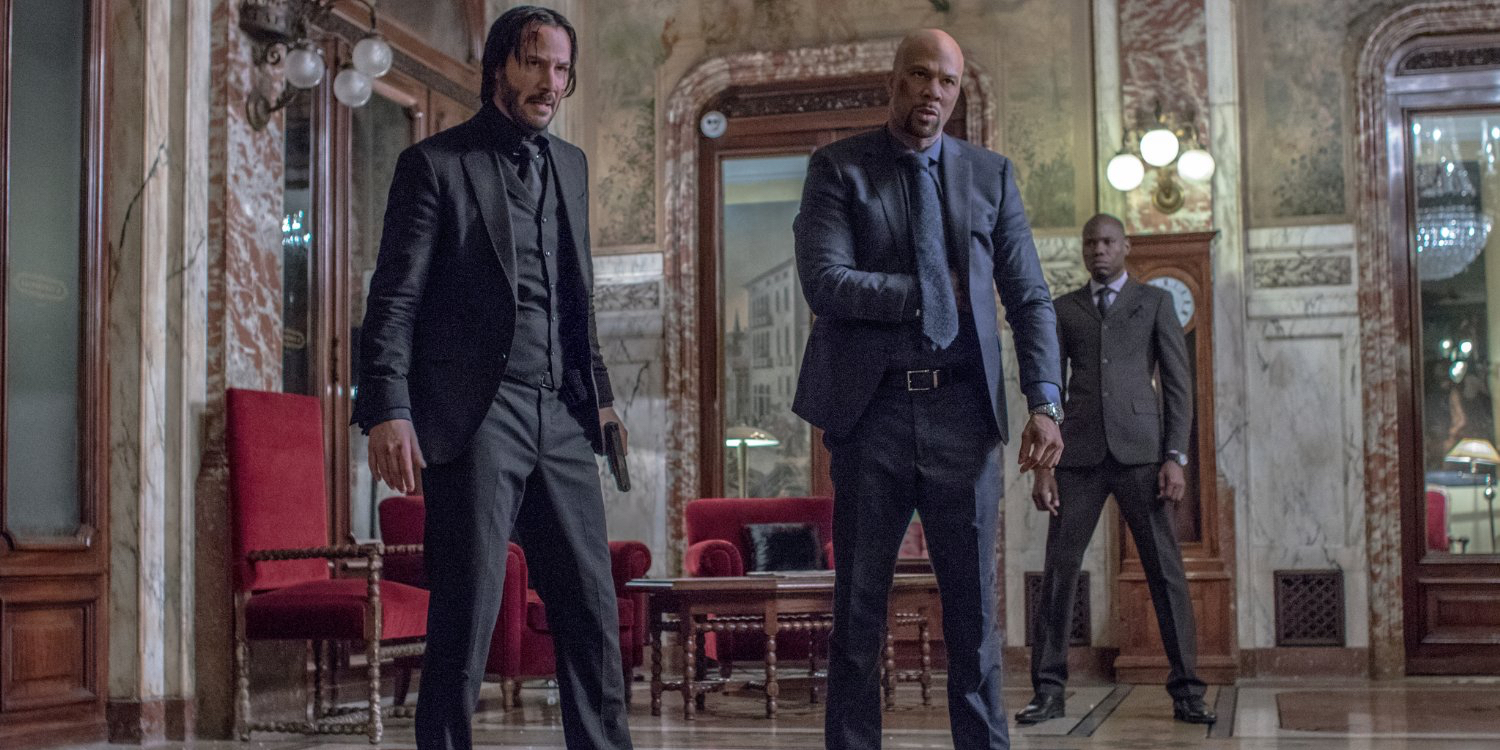 The idea of “worldbuilding” has been pretty maligned lately, in most serious cinematic circles – just look at the hopeless screenwriter from La La Land, played by real-life hopeless screenwriter Jason Fuchs (Ice Age 4, Pan). If you’ve read anything about the surprise success of John Wick, though, chances are you’ve heard it praised for its worldbuilding. What’s the difference, what’s John Wick‘s silver bullet, no doubt shot into some goon’s head by Keanu Reeves’ title character?

The short answer is that the world is built artistically, hiding its artifice as much as possible. Worldbuilding is done outwards; it exists to enrich the story’s central conflict by involving the setting in that conflict. In badly-built worlds, the direction of that construction is easy to spot: Look at the Die Hard movies, where the small nature of the setup makes each bigger story dumber than the last; or the Green Lantern movie, where the idea of a vast network of trillions of life-forms over dozens of galaxies in introduced and then never really matters to the story at all.

The elegance of John Wick’s world is marvelous in comparison. The story’s conflict at its most basic level – a man getting revenge on the man who killed his dog – is so absurd that it became the main hook of the movie’s tremendous word of mouth. As you watch, though, the actual narrative blends unconventional character relationships, wordless storytelling, and the semiotics of classical mythology to create a deep, involving, emotional story of a man finding the hard way to redemption, after the easy way was wrenched from him in the hardest way possible.

John Wick created its world in parallel to the one we know. Secret, self-contained and strictly regimented, the world of assassins and criminals existed along perpendicular lines to John’s quest for revenge. He wasn’t out to get everyone, just the men who wronged him, and the people who those men sent to kill him. Most of the main characters start out as third parties, and some end up supporting the villains, but most actually cheer John on, if not actively helping him along his way. It’s only stated indirectly, but whatever forces guide the mysterious underworld, they’re all on John’s side, all the way through the movie. Our hero is a methodical, single-minded instrument of death, but as gruesome as his rampages might be, we’re always assured he’s doing the right thing.

Last week’s John Wick: Chapter 2 has no such assurances. John’s continuing adventures take him an order of magnitude deeper into the underworld, but this is a sequel: The story knows it’s working without the element of surprise, and its world now needs to be painted in subtler shades. After the action-packed prologue tying up the last loose ends, John receives some bad news from John Leguizamo’s Aurelio: He can’t fix everything that broke in the first movie. As all-powerful as the will of the assassins seemed, we see here its first limit: Nothing can be restored to the way it was. Under the underworld’s rules, John must return.

His life in the Elysian fields of the sleepy suburbs now assuredly destroyed, John pleads his case in the shadowy Manhattan realms of the first movie. Well, not shadowy: This section takes place completely under bright, even bulbs or soft sunlight. Things feel more proper and sedate than before, as the audience is enlightened to some new information about the underworld.

This information has an old-world, religious tenor: At the Metropolitan Museum of Art, we’re told of an all-powerful and squabbling “High Table” with twelve members, as twelve Greek statues facing a mural of battle call to mind the warring Olympic pantheon, tearing apart Troy. In the shadow of St. Patrick’s Cathedral, Ian McShane’s liege lord Winston remarks that without inviolable rules “we might as well live like animals”, forgetting that he’s currently in the same spot as a certain man with animal powers.

Those inviolable rules take John from the underworld of New York to that of Rome, from the center of today’s empire to that of yesterday’s. We see more of the assassin’s world, and what we see is a lot less egalitarian than before: A bank is staffed entirely by Orthodox Jews, business transactions are handled by a hive of women in identical formal blouses, the service staff of every underworld venue seems to be uniformly black. “Uniform” is the key word here: The background characters of the original all seemed personal, self-determined. Now that we have a universal government, everyone is shown to have a strict place in the pecking order, under the eye of the High Table.

A bit of linguistic background: Insofar as “John Wick” is a real name, it’s native to New York. Many places and things in the city are given the Dutch names “Wyckoff” or “van Wyck” (rhymes with ‘bike’), which translates roughly as “From the neighborhood.” John is the most common Anglophone name there is, but some people call him “Jonathan” – in the early days of the USA, “John and Jonathan” was shorthand for “an Englishman and an American” on both sides of the Atlantic. John Wick’s name is thusly the perfect mix of American, badass, and common – that last one as in a non-royal commoner.

In Rome, John Wick’s working-class American finds himself caught up in politics of the ruling class. The names get Imperial: Julius, Cassian, Ares. A high-born woman makes a sacrifice for John’s sake, implying that a metaphorical descent into Hell is better than the Hell on Earth of being a woman in the oldest and most powerful circles. This brings John into conflict with Cassian, the fulcrum of this newfound class struggle: A butler with bullets, a working-class murderer so common he’s literally Common, with enough raw skill and loyalty he’s been jumped up to serving the High Table like a privateer.

When John fights Cassian, it’s gory, animal and graceless: They tumble on the ancient cobblestones like squabbling children, eventually forced to separate by the last shreds of their shared propriety. They share ironic jokes about “”professionalism” over their contempt for the system that forced them to each other’s throats.

That system takes him back to his hometown. The New York he returns to has turned from mixing past and present to plunging into a cyberpunk-inspired future. The classical, pan-European trappings of the underworld are left behind, in favor of understated brutality in recent developments like the overhauled city subway, the digitized Lincoln Center complex, and the still-unfinished reclamation of Lower Manhattan after 9/11.

Through these environments, which emphasize sterile whites and dreamlike blues, John fights his way through a bevy of non-exclusionary assassins, who are all framed as having lives outside contract killing, fulfilling and otherwise. These new-world forces are marshalled by a comically old controller: A switchboard operator working on an adding machine, on a command-line computer fit to run Strong Bad’s email. The violence becomes gorier, more drawn-out than before, lending it a tragic beauty. The old world has the supreme power, and as both John and his many hopeless assailants do their best to avoid collateral damage, we see that old world is turning the new world – John’s world – against him.

John’s turning point comes on a subway headed across Manhattan (I can’t comment as to the intention, but from the station announcements we hear it’s headed to the east – towards Europe, eventually, and away from his home in New Jersey). With one stroke he turns his back on everything the underworld stands for, turns aside all that pointless propriety and loyalty. True to Ian McShane’s earlier comment, he forsakes the rules, and turns to people who live like animals.

With a wink and a flourish, Chapter 2 shows us that, to paraphrase the famous dictum on the nature of the universe, it’s secret criminal underworlds all the way down. Did you know that in recent years New York’s decades-old homeless problem has been used as a cover for a network of spies, fighting a proxy war over the metropolis? I sure didn’t, and no one else but John Wick seems to.

This is unheard of – the previous movie-and-two-thirds has been meticulous about how hermetically sealed its underworld has been. The gold coins that serve as members’ combination passport and currency are labeled “Ens causa sui” – “creating itself”, beholden to no one, impossible to ever enter or leave. This newfound world-within-a-world-within-a-world is implied to recruit people literally off the street, and their introduction shows the power in such a modular, forward-thinking, undiscriminating structure.

According to the unnamed leader of this organization, who only calls himself “the King” (A Newsies fan?), it’s something of a recent resistance movement, exchanging the fetishized glamour of flashy secrecy for for the pragmatic practicality of hiding in plain sight. Who’s responsible for this ultimate populist movement, against the ultimate bourgeoisie? It’s suggested that in some ways, it’s all thanks to quiet and subtle rebellion of John himself.

This fact represents John Wick: Chapter 2’s central thesis, both on its own world and its place in the world at large, as a hotly anticipated sequel to a surprise hit. The first movie held that justice was a God-given right, inherent in the world, and that those who denied it would be visited with retribution. This time, as the film draws to an otherworldly finale and denouement I won’t mention a word of here, it reneges on that idea. Justice is a comforting lie, thought up to excuse men in power taking whatever they wanted, and the real justice comes in taking that power out of their hands. Like so many people in these times, John Wick’s faith in the system has been shattered, and he’s going to deal with it the same way he deals with just about every other problem: Shooting it in the head.

Review: THE LEGO BATMAN MOVIE Previous
Does it Look Like It's Our First Time? Revisiting James... Next