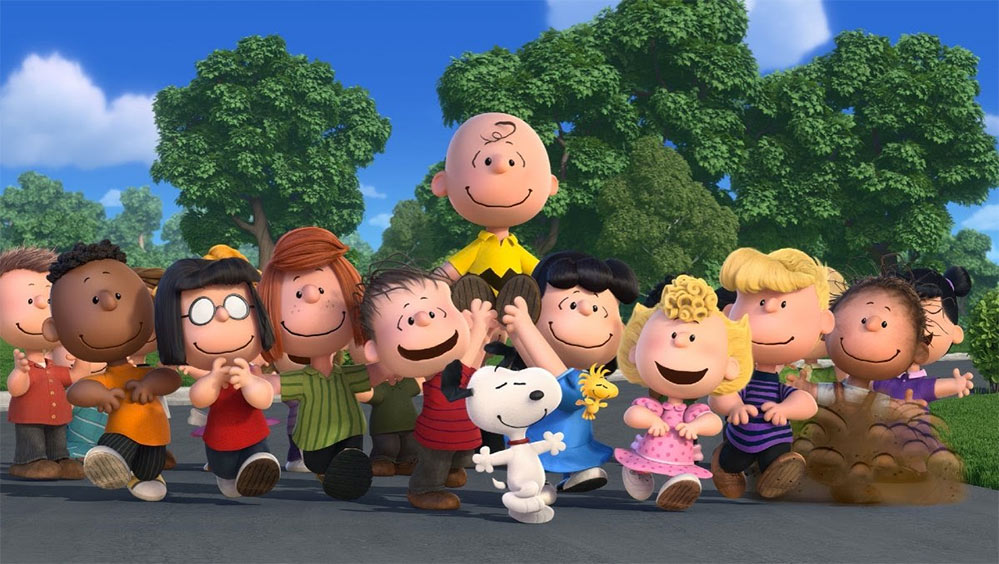 This month, Peanuts celebrates its 70th anniversary: a landmark worth celebrating considering that the series has remained a consistently iconic influence in animation and comics. Its designs are simple, but full of energy, personality and charm. The other key element in its success is Charles M. Schulz’s genius for tackling several complicated subjects in a way that’s digestible for kids and adults alike. All that legacy is synthesized in The Peanuts Movie, a masterful achievement that takes Charlie Brown and his gang to new heights.

For starters, one of The Peanuts Movie’s biggest virtues is that it utilizes CGI to tell a Peanuts story in a way that feels more dynamic and bigger in scope than it is usual for animated media in the franchise. However, it respects all the little, but distinctive details that the Peanuts cartoons have maintained over the years. For instance, Snoopy still uses a typewriter and his house is never seen in its entirety when he’s a World War I flying ace. This approach is faithful enough to be enjoyed by veteran fans, and refreshing enough for potential newcomers.

Director Steve Martino and the artists at Blue Sky Studios treat every element in the locations as a potential source of physical comedy and action. Add agile pacing and a beautiful color palette and you have scenes where fun is never in short supply.

For a Peanuts story to succeed, the most important factor is to nail the themes that Schulz’s incorporated in his work, like solidarity, self-doubt and anxiety. Fortunately, The Peanuts Movie gets the job done and then some. Throughout the film, Charlie Brown goes through a series of experiences that inevitably trigger his shattering insecurity. He’s so used to his own failure that he always sees a way for things to go south, regardless of the stability around him. Especially because his mistakes have the unfortunate pattern of being witnessed by the other kids at his school and neighborhood. Interestingly enough, this insecurity that haunts Charlie Brown every second is also what leads him to fulfill a potential he doesn’t quite realize he has.

If there’s something Charlie Brown knows more than anyone is the striking realization that people are harsh when you put yourself in the spotlight. So when he sees another kid go through a similar situation, he can’t help but lend a helping hand so they can succeed, even if it comes at his own expense. Little by little, this capacity for empathy earns him the admiration of other kids (especially the Little Red Haired Girl), as well as a newfound self-esteem. His ability to take initiative makes him a leader in his own right.

An internal resource Charlie Brown uses to cope with life’s burdens is his enthusiasm for theatrics. When he’s wearing a disguise or dancing, everything that haunts him suddenly disappears. Regardless of how things turn out, enjoying his passions makes the awkward moments worth experiencing.

Friendship has always been a core value of Peanuts, and in the movie, we see this in Linus and Snoopy, who appear in brief, but important scenes where they help Charlie Brown to see his landscape in a new light; or simply provide much needed company in times of sadness. Linus may have his own issues going on, but Charlie Brown can always count on his philosophical perspective. And no matter how cheeky Snoopy is sometimes, he’s the best at helping Charlie Brown to perfect his own skills.

In the meanwhile, Snoopy takes inspiration from Charlie Brown’s life to imagine his own tales as the World War I flying ace, who is on a crusade against the Red Baron. The sequences in Snoopy’s imagination serve as a nice breather from the main plot, as well as an opportunity to present the classic plane fights from the comic strips in a way that was never seen before. The skies feel huge, and the camera captures the speed and swiftness of a battle plane in the heat of combat. The heart of the film is in Charlie Brown’s path, but the sequences where the focus is on Snoopy perfectly translate Schulz’s childlike wonder when he wrote and drew the world famous beagle. It’s worth noting that this side of The Peanuts Movie is expanded to great effect in the video game tie-in Snoopy’s Grand Adventure, where Snoopy travels to adventurous locations such as a jungle, a music land or outer space.

In a culture that tends to be awfully judgmental towards failure and mistakes, Peanuts continues its legacy as a source of sympathy and sincerity for those who keep trying despite everything getting in their way. Charlie Brown is a reminder that no matter how many problems you face and how many times you mess up, trying things and throwing yourself at life is still worth a shot. After all, you never know when something good will happen. And in the end, you’ll come out better because of it.

LOVECRAFT COUNTRY Episode 9: "Rewind 1921" Previous
Now vs. Then: RISE OF THE UNDEAD Next