Everything is definitely not fine 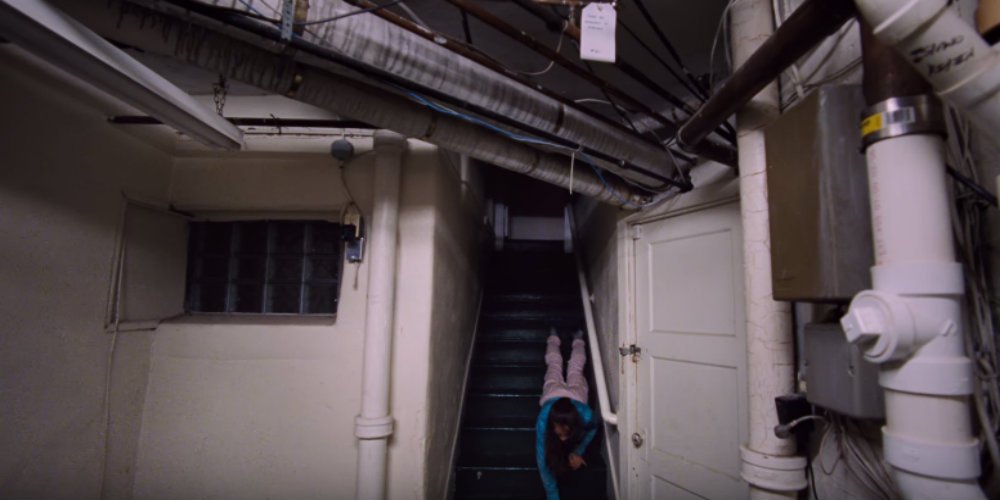 This intensely frustrating misanthropic soul-fucker from Yorgos Lanthimos is difficult to talk about from an abstract critical vantage so I’m calling this a thinkpiece and spoiling the film. I have to reckon with its story right down to its dizzying (ed note: that’s a joke) climax. I recommend reading on after seeing the film.

The Killing of a Sacred Deer isn’t exactly a film about people, or at least not believable people. Colin Farrell and Nicole Kidman play caricatures called Steven and Anna Murphy, a pair of grossly materialistic Cincinnati suburbanites who share a ludicrous mansion with their perfectly lovely nuclear children, Kim and Bob. The Murphys all pretend at high society politesse, their mouths packed with graces and pronouns as if they’ve just left a finishing school and want to show off to each other what they’ve learned. Their house is beset by “dear” and “darling” and “mother” and “father.” They don’t raise their voices, not at first, not while they are meant to fulfill the archetypes that Lanthimos and co-writer Efthymis Filippou want to portray. Kidman has played many variations on Stepford residents; she and Farrell both delivered variations on this in Sofia Coppola’s very fine remake of The Beguiled. She excels at caustic delivery of weirdly considered language–most notably in Eyes Wide Shut (Kubrick must figure heavily into any response to this film) where her pace was famously sluggish and unemphatic.

The children are tasked with absurd, templated lines as well; a teenage girl in 2017 repeatedly asking after the whereabouts of her various MP3 players? This is a line a distant adult might give to a teenager in 2005. The film is dense with pre-programmed, vaguely incorrect language. These people aren’t meant to think for themselves. Even names are out of time; children of contemporary wealthy sophisticates called Kim and Bob? These are names that, while still common, are anachronistic among young millennials.

Steven is a cardiac surgeon whose history with booze has, maybe, cost lives. (Maybe, we don’t really know what happened as this film never really leaves its metaphorical framework – not much is determinate.) As penance for the death of his father on Steven’s operating table two years earlier, Martin (Barry Keoghan), a too-articulate 16-year-old has hatched an elaborate and deadly vengeance, a play that gives him profound leverage over this awful family.

Sure, totally not an insane person

He accepts extravagant gifts from Steven and requires uncomfortably intimate medical exams and social engagements, including midday lunches and visits with his offputting and obsessive mother (a very welcome appearance from Alicia Silverstone). He also begins to ingratiate himself with the Murphys, encouraging a crush from Kim that soon mutates into a desperate flavor of teenage co-dependency and, eventually, Stockholm syndrome. He manipulates their time, their bodies, their emotions, their lives. They begin to fall ill from an unexplainable condition, approaching death as the family and their doctors look helplessly on. This isn’t a revenge film, exactly (or maybe it is), but revenge provides its MacGuffin, the engine for its unraveling of the caricatures that the Murpheys present to themselves and others.

Martin’s power summons terrible things from the Murphys’ depths. Steven begins to reveal history and temper that he’d worked hard to bury. (A man retapping ugliness that alcohol had once let flow freely; one of the film’s many direct corollaries to Kubrick’s famous drunken psychopath. More on that in a minute.) In a film loaded with horrific moments, I was most terrified by an admission of an incident from his own pubescence, a wildly nasty sexual encounter with his own father, told in a moment of unchecked, violent mastery over his own son. Stressing the family as Martin does brings forth unspeakable abuse, and reveals histories that no child should have to hear from a parent, at least not at such a vulnerable age as young Bob’s.

Farrell and Kidman are also cold warnings about the uselessness of the scientific method in context of emotional lives. Because these are archetypes more than people, who therefore don’t feel things as people should, when faced with something as unanswerable as which of their own children should live or die (this, ultimately, is Martin’s game), they set about collecting fucking evidence to help choose; Who is better in school? Who has the greatest potential? Who does best with music lessons? It’s a sort of Lifeboat scenario but all the more horrific given how familiar, how intimate the choices are. And here we land on the rather silly title pun, a gag so tired in service to something so ominous; but after all, children are sacred, and Martin is hunting them.

The final resolution to this question is played out in a scene so memorably weird and hellish that it comes off as comedy; Steve twirling blindfolded in the family room with a hunting rifle in hand, firing off rounds at his bound and gagged family, playing a grotesque game of spin the bottle to decide at random which of his dears to murder. The last time something so goddamn monstrous had me giggling was probably thanks to Michele Haneke, another cinematic reaper whose work resonates with Lanthimos’.

The Killing of a Sacred Deer is finally, truly, an embodiment of that overused and generally misapplied tag, a “psychological thriller.” Its medical mystery scenes—diagnostic poker that’s familiar and upsetting to anyone who has lived with debilitating and unnameable chronic illness—is all a bit of a misdirect, or at least the film suggests as much in its closing scene when the surviving Murphys appear to walk off their illness thanks entirely to a curative glance from Martin. I’m not sure that, by undermining its own a-plot, the film is literally telling us that the murderous ailments the children suffer are in fact psychosomatic. It doesn’t really matter what the objective truth of the scenario is (it’s fiction, there is no objective truth). All that matters is how the characters react. If, in some way, they are aware that they’ve in essence been duped into destroying their own lives–well, that only enriches the reading of the film’s disgust with human power dynamics and despair to preserve the self.

Having called out The Shining, the film’s most obvious spiritual parent, let’s consider its formal choices, techniques that echo back to the Overlook with a clarity I haven’t encountered in another film, at least not with this strength of vision and purpose; callouts to that horror milestone are typically pretty shallow, with a bit of corridor Steadicam here or there. The Killing of a Sacred Deer doesn’t borrow the master’s techniques; it fucking possesses them. Garrett Brown, the inventor of the motion-controlled handheld camera device the Steadicam, famously sailed the halls of Kubrick’s labyrinthine Overlook hotel, following his young hero Danny on his Big Wheel, stalking him like one of the many ghosts that inhabit the place. Cinematographer Thimios Bakatakis deploys a similarly sentient camera in Killing of a Sacred Deer. It constantly moves. It is a stalker. Flying. Crawling. Keeping pace with our sad heroes. Confronting them. Always approaching the film’s victims. Even in static scenes it creeps ever closer thanks to slow zooms.It feels breathlessly inhuman. It feels cruel.

Kubrick also pioneered abrasively disruptive musical choices, overloading scenes that might otherwise play ambiguously with brutal wails from Bartok and Ligeti. He allowed his music choices to take hold of entire scenes, compounding terror, seizing all of our emotional senses. Kubrick mostly culled from existing sources (minus the terrifying rebuild of Berlioz’ Dies Irae by Wendy Carlos that propels us through the mountains during the open credit sequence). The score for The Killing of a Sacred Deer, also largely drawn from existing work, is at times aggressively atonal. Anti-tonal. At times this film is such a pure exercise in marrying music and image that dialog feels extraneous (and to an extent it is). I adore the long segments barreling through hospital rooms and hallways as low pitched accordion clusters are knuckled out like ground meat (one of few original cues by Janne Raettya). It’s disorienting and forcefully evocative. As with the rest of the film, the music doesn’t truck with subtlety. The score shares with The Shining a fondness for grumbling timpani and brittle string strikes—the score on its own practically qualifies the film as a horror exercise.

I’m exhausted and exhilarated and out of graceful things to say about this film. This is a vicious film, relentlessly tense and uncomfortable, violent, unsparing. There is an internet meme that’s become popular during the rise of authoritarianism and police violence in America in recent years known as the Everything Is Fine Dog, a pooch sitting calmly as the world burns around him. The Killing of a Sacred Deer is an unambiguous slap at everyone who is daft enough to believe the lie of civility.

LOOPER & THE LAST JEDI: Monsterhood, Parenthood, and... Previous
Shannon's Top 10 Movies of 2017 Next