THERE WAS AN IDEA… THOR and the Bittersweet Embrace of Insecurity 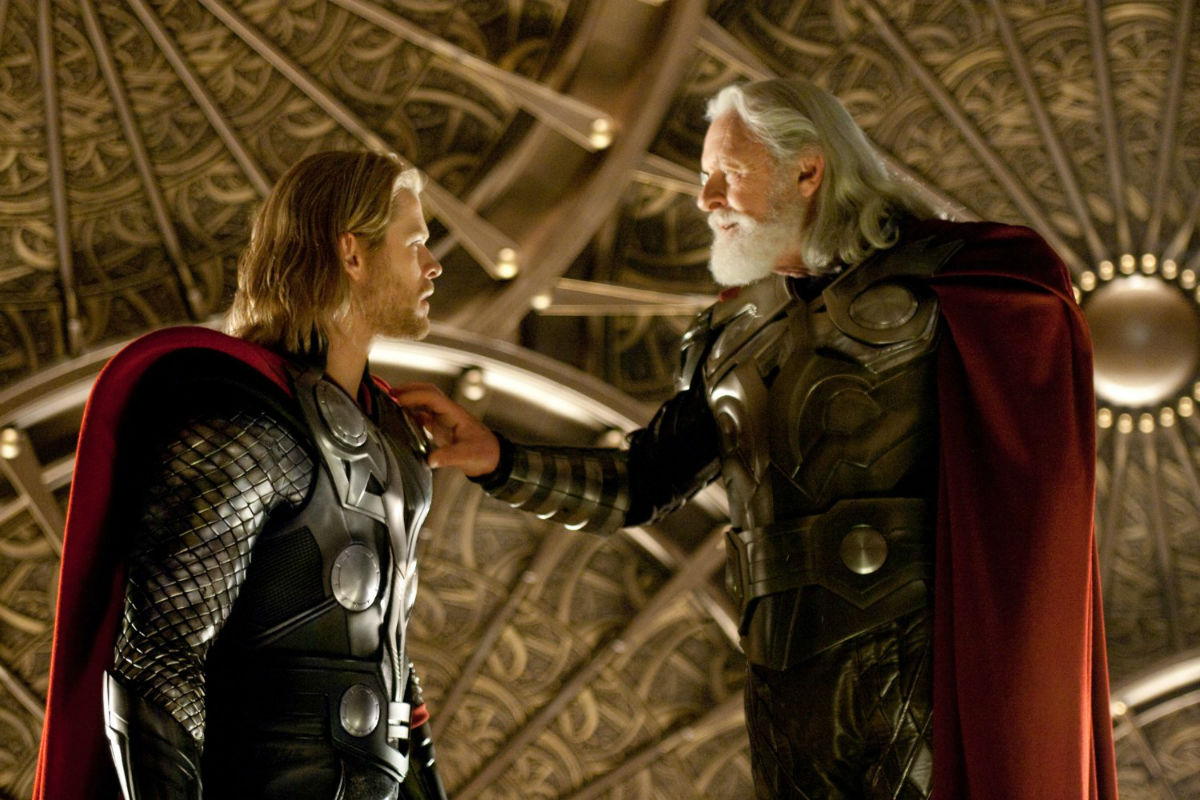 Editor’s note: This article was originally published Oct 31, 2017, and is presented here as part of the limited article series There Was An Idea…, where every week, the Lewton Bus crew dive into the Marvel Cinematic Universe in the run-up to Marvel’s Avengers: Infinity War

The Marvel Cinematic Universe has come a long way. With the passing of time the scale, stakes, and world-building in the franchise have become more extravagant and rich. This expansion sheds a new light on the relatively more restrained movies of Phase 1, which devoted most of their energy to establish the main Avengers and what makes them tick. Enter Kenneth Branagh’s Thor. The director’s keen Shakespearean sensibilities contribute to the film reaching a unique level of nuance and heart that places it among the finest MCU efforts, not to mention his ability to capture the sense of wonder associated with Jack Kirby comics. Branagh accomplishes this, in good part, thanks to his extremely charismatic leading man Chris Hemsworth, who navigates between dramatic gravitas and cartoonish comedy like it’s just another day at the office. Their combined talents lead to a fun fantasy adventure with a strong moral core.

The film introduces its eponymous protagonist in a relatively offbeat fashion: at one of his highest points. One that, without any context, seems like a climactic triumph. It’s a narrative choice that subtly foreshadows the fact that Thor is not up for an easy ride. He’s honored in a ceremony that officially declares him as the legitimate heir to the throne of Asgard, currently occupied by Odin, his father. Having everyone around him treating him like a king makes Thor feel like he’s already entitled to all the powers and responsibilities that come with being the leader of an entire population. He’s enthusiastic and can’t wait to leave his mark. He sees the perfect opportunity for it in attacking Jotunheim as a response to the Frost Giants’ assault in Asgard. The problem is that this eagerness for action blinds him to the long-term consequence: a political crisis between the Asgardians and the Frost Giants, so Odin expels him to Earth and strips him from his powers.

Although the exile seems like a punishment at first, the movie develops it as a therapy of sorts. Stripped of his privilege, Thor doesn’t know how to react and where to go, something that alarms the people around him and motivates them to treat him like a potential threat. All of a sudden, the Prince of Asgard has become the type of individual he previously rejected and condemned: an outcast that everyone fears. For the first time he finds himself in a position where he can become familiar with the experiences of someone else, a fundamental process for anyone that wants to help the world. His heart was always in the right place, but his brain was not.

To put things into perspective, Captain America: The First Avenger actually serves as a great companion piece to highlight Thor’s character work. Steve Rogers spent most of his life suffering abuse but without the means to effect meaningful change, even if he had the intelligence and valor required for it. In contrast, Thor was dripping in glory and had all the opportunities and power in the universe, but had no idea how to use them for anyone’s benefit. How can you develop a proper strategy for the people you want to serve if you don’t know what their anxieties, goals, and fears are?

Even without his godlike attributes, Thor initially feels confident enough to keep his self-righteous attitude. But the failure to lift the hammer Mjolnir, (which is essentially an avatar for nobility), is the moment where he finally realizes he has been treading on the wrong path.

When you talk about Thor’s arc, you have to mention his tormented brother Loki, who is a protagonist in his own right. He’s been granted the same life of luxury, but without the praise and influence that come from being a future leader, something that makes him bitter towards his family. Not to mention that he’s an adopted Frost Giant, a fact that was kept secret from him. Unlike Thor, Loki doesn’t let his misguided feelings get in the way of his reasoning. Quite the opposite, in fact, they inspire him to sharpen his deception talents and execute them to a frightening extent. His biggest success is not occupying Asgard’s throne after Odin falls unconscious, but manipulating Thor into a strong depression by blaming him for their father’s fate. He’s switching places with him, i.e., Thor is now the ignored misfit and Loki is the one enjoying the glory of power. As the second fiddle of the two brothers, Loki learned long before Thor that this status is something that has to be earned, even if his ways and motivations are insidious.

Meanwhile, Thor is desperate for a new purpose, and that’s where Jane Foster comes in. She shows him kindness and compassion in a sea of hostility, and the fact that it has nothing to with Thor being part of Asgardian royalty makes him aware of his full potential as an individual and as an agent of hope. He realizes he can still have power and agency without his political and magical leverage. Thor learns that power is more valuable when it’s focused on personal integrity than brute force. On the other hand, Thor also has a personal significance to Jane. She’s constantly told that her scientific theories are fantastical nonsense, but her experiences with a demigod from another world hint at new possibilities in the universe, as remote and unclear as they can be. She learns that said possibilities need to be embraced, not necessarily understood. After all, some of the most compelling things in life come from situations we can’t fully comprehend and digest at the time, very much like the subjects of Jane’s work.

Finally used to his new fate as an inhabitant of Earth, Thor is put to the test when Loki attacks him, and the people around him, with the Destroyer armor. Thor has finally found his purpose: working as Earth’s stalwart champion, and comes to terms with the fact that his mission is bigger than himself. As a result, he’s willing to sacrifice his own life so the local civilians can live. That selflessness makes him recover Mjolnir and his powers in order to kill the Destroyer armor in one of the most emotionally striking payoffs in the MCU, magnificently complimented with Patrick Doyle’s uplifting score. It symbolizes the idea that power is not the ultimate goal, but merely a tool in the fight to improve the world, and by implication, ourselves.

Despite his success in saving Asgard and Earth (for now at least), the ethical implications of his recent emotional roller coaster leave Thor asking himself about what he should do next and his role in the universe. He’s more doubtful and skeptical, but also wiser than he was when he stormed Jotuntheim, a stance that delivers a bold point. That it’s not only fine, but vital to have insecurities. The path to become the best version of ourselves begins with acknowledging that we’re not always going to have the solutions right away. Personal uncertainty makes us question if the way we act and think is the right one. If we don’t experience it, we’ll get stuck in a position that undercuts our potential for learning.

Not only do we have the right to feel weak. We must feel weak every now and then in order to realize exactly what we require to become strong.

The MCU movies of Phase 1 are all about examining and embracing human frailty. Thor in particular stands out for being an entry where the hero ends his journey less confident than he was at the beginning, a stage that is portrayed as his biggest victory instead of a nadir.

Review: THE CAMPUS Previous
Winnie Pooh Strikes Back in the CHRISTOPHER ROBIN Teaser... Next