How not to tell a story of survival 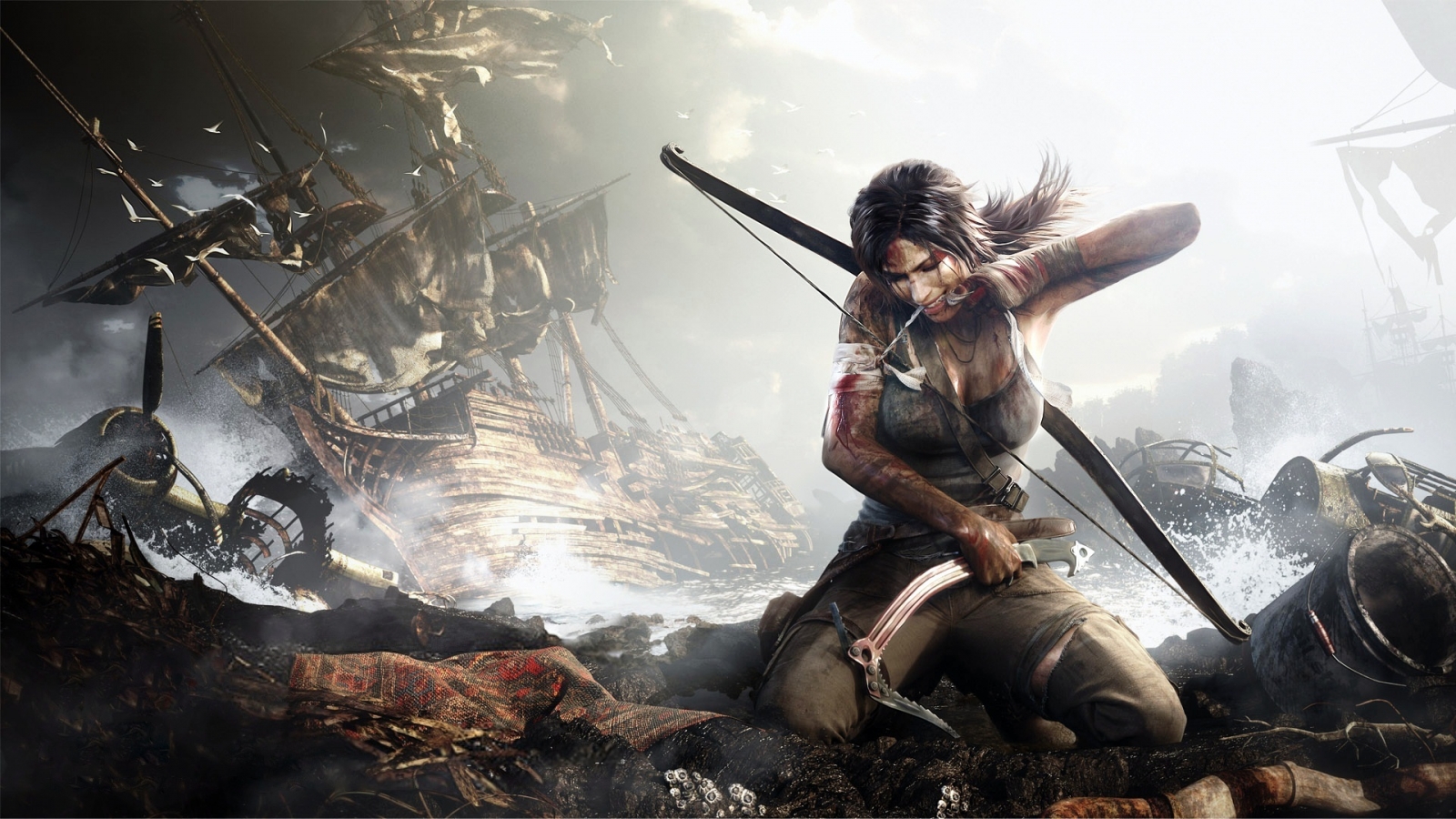 Origin stories have become the norm these days, from endless retellings of the childhoods of everyone’s favourite superheroes to bizarre, pointless tales like Pan, Oz the Great and Powerful and that gritty WWII Willy Wonka origin story Sony was trying to make at one point (I’m not kidding). So it was only matter of time until in 2013 we finally got the story of how gaming’s most famous tight-clothing enthusiast Lara Croft became the animal-slaughtering grave-robber we all know and love.

It’s not good, to put it mildly. The story is that Lara and her archaeologist friends get shipwrecked on a mysterious island populated by human-sacrificing cultists, Lara’s friend gets captured and she goes off to rescue her. That’s pretty much all of it, and what little there is there has many, many flaws. The plot is almost always directed by random incident instead of character, and usually consists of disconnected, interchangeable vignettes in which either Lara’s bland friends die and she cries a bit, Lara gets kidnapped or brutalised, or a brief moment of hope for rescue which is then dashed against the rocks. The tone is also parodically grimdark, but what I want to focus on is the failure of Lara’s development as a character, as it is what the game is ostensibly about.

Lara starts off as a civilian archaeologist searching for ancient Japanese relics, but after the shipwreck is forced to brave horrific circumstances to become the hardened survivor she needs to be to save her and her friends. The main flaw with the game’s handling of this is that Lara’s arc is almost totally detached from the events of the plot. None of the major story moments of watching her friends die or being brutalised produce a noticeable change in her behaviour or drive her arc, it just kind of happens because that’s what her arc is meant to be. Lara doesn’t become a toughened killer because of the circumstances she’s forced to endure, but because she is the protagonist of this game, and this dissonance becomes increasingly surreal as the story goes on.

Tomb Raider is a game in the modern ‘action adventure’ mould, which in this case means it shamelessly apes Uncharted (who’s own shameless aping of TR’s predecessors forms some sort of circular game development human centipede). The fundamental mechanics of TR are platforming and killing everyone in your way, and the focus on the latter destroys any odds of the player feeling like they’re experiencing Lara’s arc, which is the most important thing you must accomplish when making a game about a defined character.

Gameplay Lara and Cutscene Lara are completely different characters. Cutscene Lara is a scared, vulnerable woman clinging to life in a hostile environment. Gameplay Lara is a hardened killing machine, a Valkyrie descending from the heavens to rain leaden death upon any who would oppose her. From the second she picks up a gun she can headshot everyone in her way like John Wick, unimpeded by a lack of marksmanship experience and even impalement (which also does not prevent her from leaping about like a startled flea). She experiences no remorse or difficulty in killing, and is a far more capable fighter than any of the battle-hardened cultists she encounters. The regenerating health system also demolishes verisimilitude in cutscenes, as Lara will seemingly be troubled by her stab wound while shrugging off gunfire and machetes.

The game’s seemingly only method of trying to push Lara’s arc forward is to brutalise her, which happens over and over again to a ridiculous degree. After the tenth time Lara is beaten, falls fifty feet, gets caught in a bear trap or survives a helicopter crash she seems less like a human being than a crash-test dummy who somehow gained sentience and tear ducts, and the constant brutality and ferociously dour tone all just ends up feeling unpleasantly exploitative.

Lara’s supposed reluctance towards killing early on is also so jarring as to be utterly hilarious. After killing forty men without a second thought, as the player is instructed to do so by the game, she begins one gunfight by shouting “please, you don’t have to do this”, while the player is instinctively opening fire upon this latest batch of foes. Shooters, by their nature, are deliberately designed to dehumanise enemy goons so the player can kill them without remorse, so unless the game takes time to humanise its enemies to the point where the player empathises with them any distaste for killing on the player character’s part will feel unbelievable.

A better way to develop the PC mechanically in this sort of story is to have the protagonist’s abilities improve in the background outside of the player’s notice, either arbitrarily as the story progresses or as a function of the player’s actions (early Elder Scrolls games made great use of this). Lara starts off completely new to firearms and violence, so it would make sense for the player to have similar trouble at this point. Start off with the gun reticule being huge for example, requiring the player to get close to accurately hit anything, then have it slowly reduce in size as Lara becomes more experienced. Her physical abilities should also reflect her condition in the story, if she’s wounded it should impede her ability to jump and climb, making less complex platforming exercises more difficult for the player. It’s important to note though, this sort of background development should never impede the player’s progress or confuse them. Their current capabilities should feel natural and instinctive, even if they don’t notice exactly when they change.

Survival is the main theme of Tomb Raider, but the game does a very poor job of communicating this outside of cutscenes. As a central mechanic, survival in games is about the player’s relationship to their environment and having to scavenge and manipulate it to stay alive. In Metal Gear Solid 3, the player must hunt for food and care for themselves by methodically tending to their wounds with scavenged supplies. Learning the terrain is also a major factor, as the player must repeatedly backtrack across it to reach new areas.

Lara Croft however has a very detached relationship with her environment. The game places heavy emphasis on maps and travel around the island but at no point is it ever required that the player make use of this or even pay attention to it, as the game is overall very linear. Lara also never uses her environment to survive outside of cutscenes and artificially constructed puzzle sections, there’s a hunting mechanic established early on but forgotten immediately after. The only time in gameplay Lara makes use of anything around her are resources used for weapon upgrades, but the resources are just generic ‘salvage’ and the weapon upgrades so professional as to remove any feeling of being jury-rigged by hand.

The game’s constant use of scripted setpieces also serves to remind the player they are merely puppeteering their character instead of being them. TR is filled with extended, scripted sequences of Lara running away from or out of collapsing environments and every time it’s boring and disengaging. There’s no tension, the player is pointed in a direction and told to hold the forward key and occasionally hit jump while scenery collapses harmlessly around her. The player knows that as long as they follow the lit-up path ahead they will be safe, so while Lara is ostensibly fighting for her life they’re just listlessly pressing buttons until the ‘danger’ stops. Every time this dissonance happens it jarringly removes the player from the narrative stakes at hand; in any game with a defined protagonist the marriage of player and character’s arc is accomplished through the player’s control of their character, but Tomb Raider keeps taking this away for no reason. Removing player control is one of the most powerful ways a developer can communicate their point (just look at Depression Quest or The Stanley Parable), but when done poorly it does nothing but build a wall between the player and the story.

Tomb Raider shows how adherence to formula can completely undermine the story you want to tell, as well as how this common gaming genre is of very limited use for dramatic storytelling. Almost every aspect of the third-person ‘action adventure’ genre is antithetical to the low-key personal drama TR’s ostensibly about, and this dissonance becomes sillier and sillier as the game goes on. I think the ultimate lesson here is that we need to start inventing new forms of gameplay to support the stories we wish to tell, instead of relying on existing ones. The player should be making Lara explore the world around her, barely scraping together what she needs to survive and dealing with threats much more dangerous than her by avoidance or very carefully executed violence, but all we get is another shooter without a single new idea in its head to be trudged through and then forgotten.

Review - JACK REACHER: NEVER GO BACK Previous
MARTYRS, INSIDE, and the Quest for a Beautiful Death Next