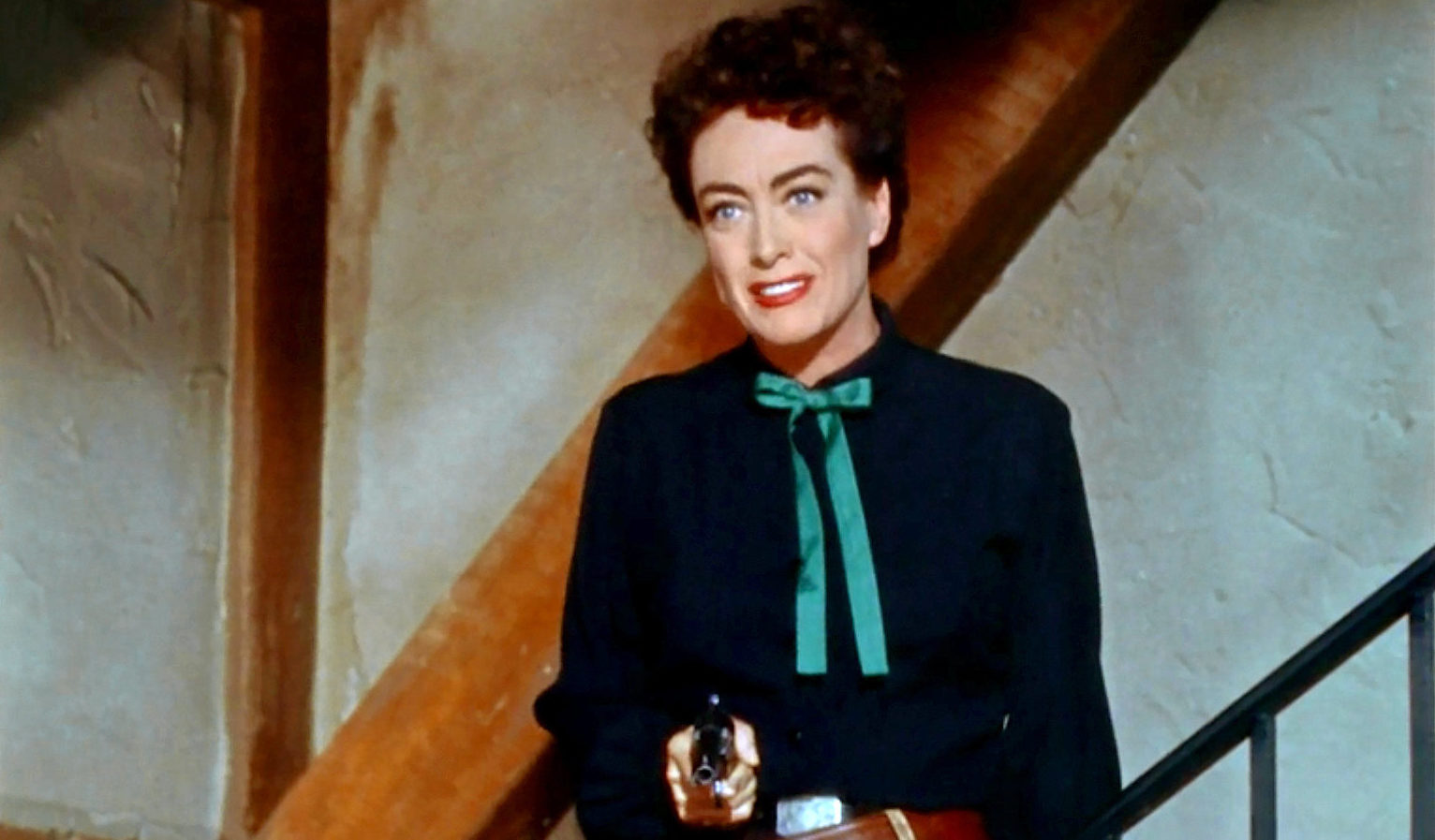 Released in 1954, Johnny Guitar is the story of Vienna (Joan Crawford), a scrappy saloon owner eagerly awaiting a railroad that will bring business and wealth to her saloon, who faces off with Emma Small (Mercedes McCambridge), who hates her for allowing The Dancin’ Kid, a local small-time crook, to stay at the saloon after he’s accused of robbery and murder. Johnny Guitar (Sterling Hayden), a troubadour who is actually Johnny Logan, a notorious gunslinger and Vienna’s former lover, is there as a hired hand to help Vienna keep the peace as Emma plots her downfall.

Johnny Guitar is most closely an allegory to McCarthyism, the Cold War-era pursuit of those that Joseph McCarthy accused of being Communists, to the detriment of men and women who were falsely accused and imprisoned. While it works extremely well in this context, I was far more interested in Johnny Guitar as a feminist story.

The film is set in Arizona in the late 1800s, a time when going westward meant frontier towns, gunslingers, and making up rules as you went along. These times were tough for women — for example, in Arizona, women weren’t legally allowed to own property until well past 1920. It makes this Western tall tale that puts two local businesswomen at its center even more subversive than it already is, though it’s clear that the film studio wasn’t aiming for historical accuracy. The purpose of the tall tale is to amaze and astonish, after all. What is more astonishing than the depiction (even in the 1950s) of women who called the shots? Set against the backdrop of a Western, and through the lens of history, Johnny Guitar becomes a story about women’s liberation and financial security.

Johnny Guitar presents an interesting case of women who are two sides of the same coin. Though the story is ostensibly about how Emma would stop at nothing to destroy Vienna because she resents the other woman for her sway over the town and The Dancin’ Kid, a small time crook who Emma loves, the story is really about Vienna’s independence and Emma’s confinement.

At the crux of both women’s stories is agency and money – Vienna has them and Emma doesn’t. In a pivotal scene, as Emma is riding with the Sheriff and the rest of the town’s men to find The Dancin’ Kid and his bandits, she makes an impassioned speech of the kind of evil that Vienna poses and how the railroad that is coming will destroy their town. What’s interesting is that this speech points to insecurities that are quite literal and metaphoric. Vienna knew the railroad was coming before anyone else, and staked her claim to land to put a saloon right by it. Emma abhors Vienna’s cunning more than she does the railroad itself. Vienna, a newcomer, wants to bring more newcomers. Emma is afraid that this will bring thousands of new residents, meaning thousands of people who will ignore her, diminish her, and erase her – just as Vienna and The Dancin’ Kid have.

Emma’s pursuit of revenge for a dead brother neither seen on screen nor mentioned often is shown as an anchor tethered to her legs, which doesn’t make it agency at all but a burden. She’s being dragged down further and further, compromising all morality to get her woman even if it means telling Turkey, one of The Dancin’ Kid’s bandits, to tell everyone Vienna robbed a bank, something that everyone else doubts was the case. The men in this movie are too cowed by Emma’s fury to resist her call for revenge. It’s not surprising that Vienna is eventually the one who has to confront her — she’s the only one with the guts to do so.

Johnny Guitar shows women who are complex, driven, smart, and even ruinous. Feminist stories aren’t about putting women on a pedestal – they’re about women as they are: good, bad, lovely, horrific. It’s about women doing what they want, whether it’s drawing a gun at high noon, going after a spurned lover, or ruining a woman out of jealousy because you will never have her courage and she will never care for you.

The most important scene of the movie is this showdown between Vienna and Johnny, and also a great example of Johnny Guitar’s feminist portrayals.

There’s so much at work here. First, Vienna’s entire ethos – I’m not ashamed of how I made my way. She left Johnny five years ago and figured out how to establish a business. She’s a self-made woman who has the receipts to show it. Even Johnny knows it. He takes a gaze around her saloon, in slight awe of what she’s built, and though he doesn’t want to know how she built it he appreciates its presence all the same. Even when she’s helping Turkey, telling her employees to leave, and going after Emma, she’s doing things her way.

Second, Vienna tells Johnny, who has a quick draw and a hasty temper, that there’s a double standard for men and women. She says that as long as he keeps his pride, he can be a man no matter what he does, even if it’s murder. But all women have to do is fail once, and they’re damaged goods forever. The entire film posits that Vienna is not only our hero, despite the title of the movie, but is punished for it by both men and women. It’s fitting that Vienna gets the last shot, but there’s no triumph in killing Emma because Vienna knows better than to succumb to bloodthirst.

Third, Vienna’s agency and independence are more important than Johnny. It doesn’t matter that she still loves him; throughout the movie, Vienna is the one calling the shots and dictating how she wants to live, with or without Johnny. Johnny’s most consequential action is rescuing Vienna from being hanged, and he’s mostly a passenger during the movie. He barely gets to draw his gun, despite his notoriety as a gunslinger. Johnny Guitar is unique in that it uses the Western genre’s penchant for mythmaking to raise up a woman’s story so that she can become a myth all by herself.

Fourth, this movie is about love, but on a woman’s own terms. A feminist story doesn’t mean it should be devoid of love; what it always needs is authenticity. Vienna loves Johnny, but isn’t willing to sacrifice her autonomy for him – surprisingly, he never suggests that she do so. Even though she had hoped that he’d come back to her after their breakup, she tells him she didn’t sit around waiting for him because the larger point – that a woman may want her man but surely does not need him – is what helps Vienna keep her pride even if everyone else around her paints her as a criminal.

Though Johnny Guitar came late in Crawford’s career and the movie was largely panned when it came out, it’s not hard to see why she was attracted to the role in the first place. Having long played firebrands, Crawford may have seen a kindred spirit in Vienna.

Crawford grew up in poverty, her mother taking her daughters from house to house when each of her husbands abandoned them. As Crawford found success in her 20s, she never quite forgot her roots even as she tried for decades to distance herself from them. She lived lavishly, but she was frequently the underdog. The New Yorker described her in 2011, “ravenous smile, the scything broad shoulders, the burdensome distress, the important walk and complicated hair.” It then deemed her to be both attractive and threatening at the same time, meant to be a somewhat backhanded compliment. As if that wasn’t enough, it also compared her unfavorably to the other enigmatic and beautiful actresses of her time, such as Turner, Hayworth, Hepburn, and Stanwyck.

Crawford was a screen siren capable of stopping men in their tracks. She may have been deeply insecure about her life, scraping and clawing her way to the top while her peers saw more credibility and fame, but I’d never put down a lady who worked hard. Crawford worked so hard even in the face of her own mental health issues, the scandals, the squabbles with other actors, the demands of a “diva” on sets. She may have been difficult to work with, but she was also part of a system that never gave her any leeway. As she tells Johnny, one slip and they call you a tramp.

With a role like Vienna, the story of a self-assured and financially independent woman in love with a gunslinger, Crawford notched another great role to her resume late. In 2008, the movie was added to the Library of Congress’ National Registry for notable and significant films. In the essay accompanying the movie’s official induction into the registry, Michael Schlessinger wrote, that it “can still leave first-time viewers gobsmacked some six decades later.” Perhaps somewhat surprisingly, Johnny Guitar is also well-regarded among those in the LGBTQIA+ community for the subtext between Vienna and Emma, its grand costumes and colors, and the melodramatic speeches. In February, several film critics and writers cited Johnny Guitar as one of the best LGBT films of all time, for the London LGBT Film Festival.

The Western genre is dominated by men’s stories, but Johnny Guitar stands out as one with a distinct, feminist message. Imogen Sara Smith wrote that director Nicholas Ray’s “androgynous, operatic film reveals the flamboyance and feverish anxiety ingrained in that masculinity.” As a story, it’s as good as any modern blockbuster. As a call to women to take up arms and leave behind men, it’s more complex. It’s notable that the movie ends with Vienna’s and Johnny’s story unresolved, as if it was never quite about both of them in the first place.

Westerns 101 — Revisionism Before the Revisionists Previous
Review: ALPHA Next