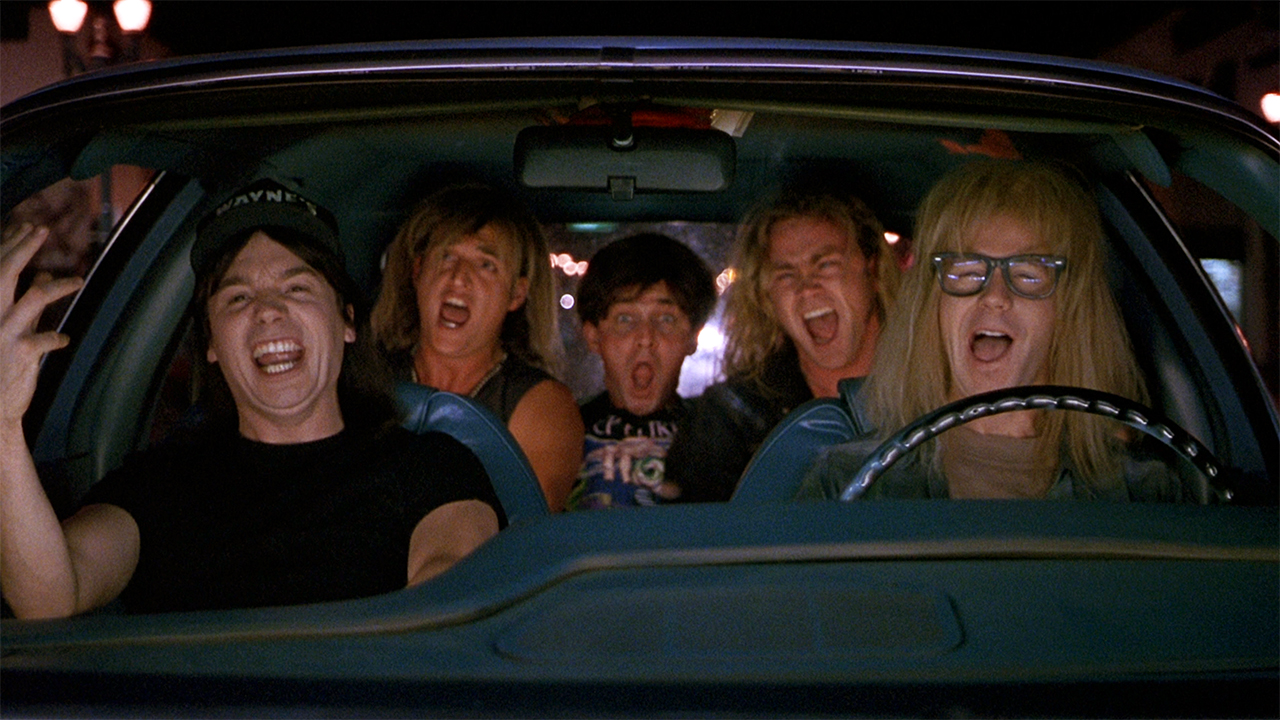 Wayne’s World, directed by Penelope Spheeris, is a great movie. Full stop, the end. In trying to come up with a thesis statement for this piece, I kept butting heads with one thing, and that was the fact that I really love this movie. Unabashedly. It’s a foundational comedy for me, and, in terms of my own development, up there with my all-time favorites. So much for not showing bias, huh?

Wayne’s World, an oddball, offbeat comedy—I hesitate to say cult film, because how could any comedy that earned 120 mil domestic gross against a 20 mil budget be considered cult?—is as much an essay, a button, on the ‘80s as anything else.  Yes, it’s a funny movie. That’s a given. The actors alone—Mike Myers and Dana Carvey at the top of their SNL game—would have made it hard to mess up, but I doubt anyone saw the film becoming as much a part of the zeitgeist as it did. The film is more than just the colorful cast, which includes memorable turns by Curt Fuller, Ed O’Neill, Lara Flynn Boyle, Chris Farley (who took on a different, bigger role in the sequel), and Michael DeLuise (son of Dom DeLuise). In a way, Spheeris created the Rosetta Stone for the modern comedy itself.

Saturday Night Live (or SNL for short) had been a long-time late-night comedy staple by the point Wayne’s World came out, onto it’s fourth major cast shift after the great early years of Gilda Radner, Bill Murray, and Dan Aykroyd and into the late ‘80s and early ‘90s of Dana Carvey, Phil Hartman, and Jan Hooks. Lorne Michaels, the show’s producer, was back in the saddle in a big way after having struggled during the early ‘80s and having taken on a minor role, so it made sense to try to go full swing into SNL all the time, including movies.

Wayne’s World was, when it came out, only the second SNL movie ever. The only previous one had been the 1980 classic, The Blues Brothers, another musically tinged blue-collar comedy. It’s easy to see why Michaels would choose to go with the weird little sketch Myers had ported over from his days doing comedy in Canada, refitted to the American Midwest, about two rock and roll slackers and the public access cable show they host from Wayne’s mom’s basement every Saturday night. In their own grungy way, Wayne Campbell (Myers) and Garth Algar (Carvey) are a sort of Blues Brothers for a new generation, a couple of counter culture misfits buoyed by the music of the era. And Spheeris, who had directed two parts of her The Decline of Western Civilization series, the first on punk, the second on heavy metal, was a perfect a director for a film that breathed the rock music of the 1970s and 1980s as heavily as Wayne’s World did.

Unlike The Blues Brothers, however, a movie that feels as much a part of director John Landis’s filmography as it did an offshoot of SNL—that is to say it feels as much of a piece with the earlier John Belushi-starring Animal House and the later Dan Aykroyd-starring Trading Places as it did with the sketch show it was ostensibly based off of—Wayne’s World feels like SNL translated to the big screen. It’s not trying to hide its roots, yet it’s still a fully realized movie.

A love letter to the ‘80s, the 1992 film still satirizes the decade it’s all about. Here’s where Spheeris was a perfect choice. She understood the time and had roots firmly in the culture, including the punk music scene, and could therefore understand the hypocrisy. Wayne’s World is a pitch-perfect summary of everything that made the decade great (the music, the fashion) while still making sure the audience knows greedhead businessmen and Yuppies chugged along in the background biting off the culture and trying to commoditize it. Business buffoon Noah Vanderhoff (Brian Doyle Murray) and oily TV producer Benjamin Oliver (Rob Lowe) represent these two sides perfectly, and the film handles them in ways that give a big middle finger to everything they stand for and offers them no quarter, even with Benjamin’s hokey end-of-the-movie “What I learned,” speech. Spheeris plays that up for all the “Very Special Episode” sitcom shallowness she can.

That naked eye, peeled not at its characters’ expense, but at their faults, is part of what lends the film its power. Wayne and Garth, for all their audience identifying signatures, are still a couple of losers (lovable or otherwise), not people to be envied. They’re there to remind you of your own friends and the kind of crazy shenanigans you got up to, but they’re not painted as aspirational figures to base a life on. Even Cassandra (Tia Carrere), Wayne’s girlfriend in the movie, for all of her desire to make it big, is still someone who is essentially sleeping with a groupie in a reversal of the typical gender roles. Wayne and his insecurities are dragging her down instead of the other way around.

Wayne’s World prefigures much of the current comedy landscape. It’s semi-documentary style  (which makes a ton of sense, given that Spheeris was a documentarian) in which characters constantly shift behavior from being in a movie to breaking the fourth wall to address the audience and bring us in on the gags with them paves the way for sitcoms like The Office and all The Office-alikes that followed. Every show that follows its characters with a liquidly moving camera and gets their specific commentary on events feels like it owes a debt to Wayne’s World. The pop-culture gags range from the “Remember when…” of Wayne and Garth in an homage to the credits of Laverne & Shirley before the Alice Cooper concert to a recreation of the Grey Poupon commercial to the then-current T-1000 pulling over Wayne and asking if he’s seen John Connor. This type of comedy can be seen in the manatee-ball usage of Family Guy or Rick and Morty’s parodies to everything in between. And the toilet humor (a memorable gag is the repeated usage of Lowe’s character getting gingerly out of his car after a thorough cavity inspection before each alternate ending) which we see adopted in everything from the American Pie series to almost the entire filmography of actors like Seth Rogen. Even phrases from Wayne’s World are still used as currency. “Schwing!” might have gone the way of the ’90s dodo, but “Not!” and “That’s what she said!” delivered in the ways they were shot are still in use.

It’s not that other movies hadn’t played around with these types of gags before. John Belushi in Animal House notably waggles those expressive eyebrows at us and Matthew Broderick takes us into his confidence in Ferris Bueller. Airplane! was based on pop-culture references repackaged as “dad jokes.”The ‘80s itself was the era of the gross-out comedy. All of these things had been done before, it’s true. But none had been put together in the stew Wayne’s World had on offer, and none had been re-filtered through an ironic slacker gaze, bolstered by the best music of the time.

The meta quality of Wayne’s World is also superb. A movie based on an SNL sketch with a plot about a TV exec taking something amateur and putting a professional gloss on it was unique and still is. The film itself is a gag on taking an SNL sketch and turning it into a movie. Further, because of the looseness, the pop-culture references, the busted fourth wall, it feels both as hectic as a sketch performed on a live comedy show and as slick as a professionally shot movie can all at the same time. It’s of a piece with SNL while having all the sheen of a real, true-blue studio comedy. Spheeris lets the actors riff like modern comedy directors do but cuts the film in such a way the riffing comes back together and forms natural connections. It’s not like in many modern films where we end up watching someone improv and adlib away a couple minutes of screen time while the rest of the cast stand around waiting for their turn to smart off for a while. As loose as the movie is, it’s not flabby, in other words. Spheeris juggles a hefty set of elements, any one of which, if mishandled, could have sunk the movie, and turns out an all-timer.

Even the sequel, which is solid (the early ‘90s is fairly good on comedy sequels with The Addams Family and Sister Act both getting decent follow ups), is only as good as it is because of the template Spheeris designed for Wayne’s World itself. If the second film had veered, it would have been a flop rather than the hit it also was. But for Penelope Spheeris, the success was short-lived. Mike Myer’s ego-driven fighting that kept her from making Wayne’s World 2 hurt her career. She never garnered the credit she should have for ushering the movie, a pop-cultural salad of jokes and ideas from the stages of 30 Rock to a bonafide worldwide box office smash, all while managing the fragile ego of its star. She was not only director, dealing with all the decision making that entails, but nanny. She followed Wayne’s World with The Beverly Hillbillies and The Little Rascals, both middling flops terribly received by critics.

Like a great mixtape, Wayne’s World took all the things people loved and put them together in new and inventive ways. In a fairer world, Penelope Spheeris would have been the Paul Feig or Judd Apatow of her time, being handed great scripts, huge budgets, famous casts, and spent her years turning out blockbuster films. The fact that after Wayne’s World, movies based on SNL sketches became a cottage industry (with everything from The Coneheads to A Night at the Roxbury) further cements what a success she made of it. She herself has said she never felt particularly funny, but it’s not something Wayne’s World evidences.

Wayne’s World, and its influence on comedy, parties on.

"He was licking me!"