A Heaping Helping of Jawing From The Lewton Bus Crew On Everyone's Favorite Spy, JACK RYAN 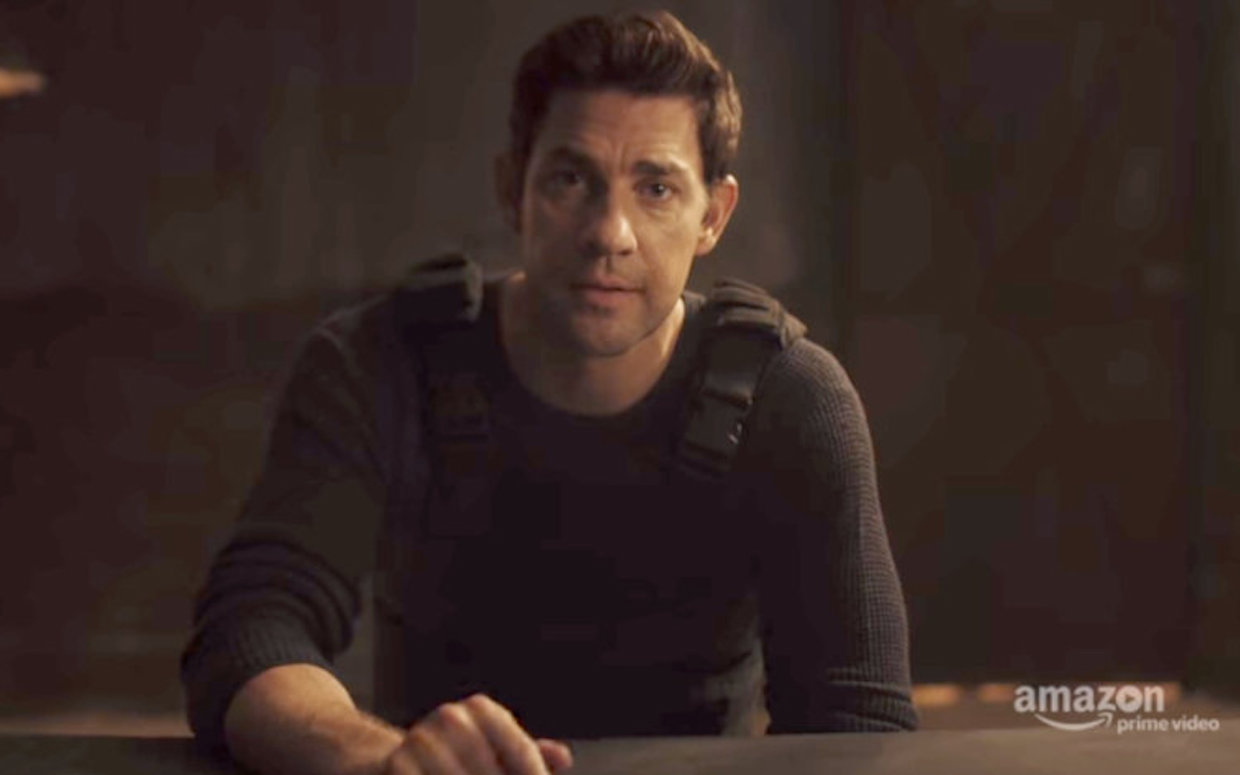 Thanks for joining us as a part of Dad Media Month, as we sit down to have a little roundtable on the first four episodes of Amazon’s Jack Ryan.

If you haven’t already watched the show, be warned that we will be discussing full spoilers for the first 4 episodes of the show.

Diane: What are your feelings and thoughts about Jack Ryan so far from episodes 1 to 4?

Allen: Well, there’s a lot to dissect there isn’t there? From the pitch-perfect characterization, to the random bursts of gratuitous nudity to try and hook the audience.

Ryan: The thing about the first episode is that it so perfectly sets up the stakes, the characters, and the mission statement of the show. It’s almost 2-3 shows in one.

Diane: I agree that the first four episodes do such a great job of setting up stakes and characterization. The show also likes to dole it out over time, and it’s not like you have to keep up with everything in the first hour.

Ryan: So far, what really works pitch-perfect for me is that it’s all about the politics of the personal. The work politics and the global politics, but nobody seems to have personal political views other than “We have to act within the boundaries of doing what’s right, insofar as our beliefs dictate the course.”

Diane: Right, it’s about doing what’s right for the country, versus what’s right by the people who have appointed you. The mission is bigger than anyone’s personal politics. Jack and Greer see that more than others, I think. Singer’s trying to get ahead, and trying to set up Jack as his legacy, but he’s playing politics when it comes to Greer. It’s why Jack doesn’t show him loyalty.

Ryan: It hearkens back to some of the places in the book The Hunt For Red October, where American sailors and Jack himself are kind of allergic to politics outside of the personal

Allen: Yeah, early Clancy, especially pre-9/11 Clancy, was all about the injection of morality into amoral enterprises, and how that morality is tested and strained, not so much about policy, and the show reflects that.

Diane: If there is really one thing that sticks out with Clear and Present Danger, it’s that Jack isn’t a politician and he’s not a negotiator. He says as much many times, and it gets him into trouble because he’s in over his head. You see the seeds being laid down for him to understand that yeah, he should learn about negotiation and politicking because he’s going to need those skills.

Ryan: That’s precisely what I mean. Jack doesn’t want to play politics, but Greer’s boss is all about that. Greer’s boss believes in the furtherance of agenda and legacy, over the work itself. Jack’s allergic to that, as clearly as Greer seems to be, though Greer is fighting with it.

Allen: He’s all about who gets credit, who takes lead.

Diane: I think Greer wants to do his job well. He’d rather be doing it from Karachi, but he still understands an honest day’s work, even if it’s from a comfortable office.

Ryan: OHHH! The fact that Greer flatly denies he’s playing politics (which Jack assumes) and then proves he isn’t because he took Jack’s tip and ran with it!!!! He just didn’t trust Jack to lead on action items yet. He doesn’t know the guy, so why would he?

Diane: He knows people aren’t always right, either. Jack thinks he’s following the clues, but there’s really no solid proof until Jack goes behind his back and then he follows up.

Allen: Greer also knows how to live in both worlds in a way Jack absolutely does not at this point.

Diane: No, Jack is definitely still under the impression that he can stay on the right side of things and never touch the dirt. He’s not quite a wolf but he’s not a sheep either.

Ryan: And that goes back to what I think is so interesting about the setup. In the books, Greer is established, and Jack is toeing his way into the world. In this, they play with that by giving the typical ‘tortured protag’ beats to Greer, who is falling down the ladder at lightspeed. Any other show might have Jack start out as disengaged and bitter these days.

Allen: But then it wouldn’t be Jack.

Diane: I hope Jack is never bitter. His earnestness and conviction that he can do things morally is the essence of his character.

Ryan: By having Greer sort of fill that role, they allow Jack Ryan to be Jack Ryan. Earnest, forthright, and morally adroit.

Diane: This show does more with Greer than the movies ever really did. James Earl Jones didn’t get to do anything before he’s (spoiler alert) killed off in the movies. Here, Greer’s a real partner.

Ryan: For sure. Greer is sort of the second protagonist. His POV is equally as vital as Jack’s.

OH, AND OF COURSE MATICE

Matice is a wonderful side character

That’s Matice on the left, in all his laconic glory.

Diane: That Cobalt siege is amazing. I keep rewatching it and picking out new things each time, from the geography to how they use commands so you can understand what they’re doing as the viewer but it’s also stuff that would actually happen. Matice led that crew. He knew exactly what to do, and he wore a Nirvana shirt while doing it.

Ryan: Matice as this show’s John Clark is so inspired. They found a way to use the character without using the character

Diane: Is it a hot take that I like him more than Clark?

Diane: He does, and it’s impressive. He’s on screen for maybe a total of 15 minutes? He’s got personality every time.

Ryan: In a show where you literally cannot take your eyes off of Greer and Ryan, Matice shows up and takes control. “You got any tips?”

Diane: He comes in and out of scenes and just completely changes the dynamic. “I’m trying to diversify my portfolio.”

Diane: He had an orange Fanta, which is the best flavor.

Allen: One thing the show is pretty smart with is how authentic Mattice is to modern soldiers.

Ryan: He’s as cold as ice, but he’s genuinely friendly and personable

Allen: Even though he’s definitely not a soldier anymore. Mattice is straight-up CIA.

Allen:  There’s a moment at the end of the season that pretty clearly cements that whatever his role is, he isn’t in the military command structure anymore. He just kinda goes where he’s needed.

Ryan: So that’s another thing. This show does a little trick that a lot of shows don’t do any more, and that’s the super charismatic and amazing guest star. Sandrine fits that bill too. Every second she’s on screen she is running it. Jack constantly being passed between tutors is a fun dynamic to keep him the ‘neophyte agent in training’

Diane:  He gets to learn from a variety of people, and unfortunately, he also gets to experience loss again.

Ryan: He’s always tagging along with a superior until he has to step up and take action himself and trust his instincts.

Allen:  Possible hot take here, I think Sandrine might have a better understanding of Jack than anybody.

Ryan: Sandrine has him down cold.

Diane: That’s part of what makes Jack so green, and the show doesn’t really go into it and doesn’t need to. He stuck himself behind a desk despite his skills to avoid losing anyone. We know he suffered loss in his helicopter crash. Sandrine called it when she said he’s a wolf pretending to be a sheep. She’s not right at first, but he gets there. He does what needs to be done, in his own way, but he’s not meant to sit behind a desk.

Allen: A thing that the books do with Jack and Clark that I expect the show will do with Jack and Matice, is that the primary reason Jack isn’t like those guys isn’t skill, it’s that he got out of the military before he could become them.

Ryan: The other thing is that Jack has to learn the difference between a drone and a leader. An agent can’t really be a foot soldier.

Diane:  He hadn’t seen enough awfulness to lose his innocence yet.

And that’s all for this installment!

Check back soon for our next round-table discussion.

Until next time, we bid you adieu!