THERE WAS AN IDEA… Yeah, Nah, Can’t: Ragnarok and Australian Comedy

THOR RAGNAROK's distinctly hemispheric sense of humor, and its parallels in Australian comedy. 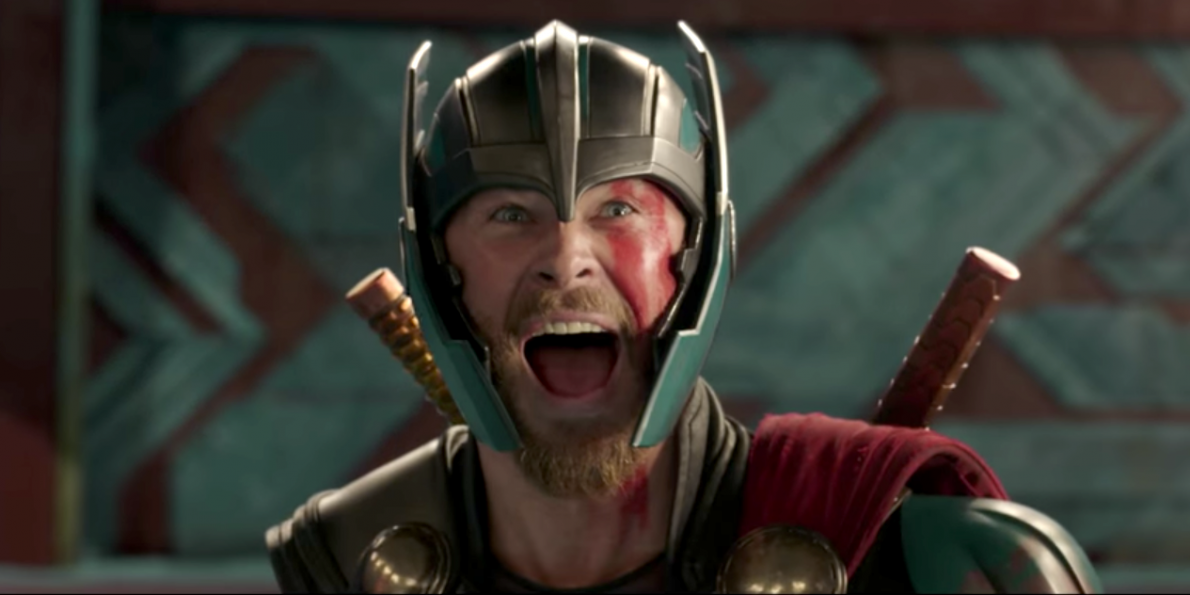 For Ragnarok week, I decided to change it up a bit and do a lighter piece introducing people to the rich tapestry of Australian comedy1, using scenes from Thor: Ragnarok as a jumping off point.

Yes, this was just a thinly veiled excuse to spend an entire article talking about my favourite local comedy acts, why do you ask?

Don’t Get No Respect

One of my favourite aspects of Ragnarok is the fact that it often undermines the various “badass character moments” we’ve come to expect in superhero films.

Valkyrie’s badass introduction has her falling flat on her face into a pile of garbage and Hulk’s big heroic entrance scene at the climax has him first fall flat on his face as Bruce Banner, remaining unconscious for several beats before he finally turns into the Hulk.

It feels as if this movie doesn’t think as highly of its characters as other Marvel movies do. The irreverence with which it treats these characters is typical of Australian comedy.

There are several ideas that Australia claims it’s founded upon— egalitarianism, antiauthoritarianism and the notion of “the working man’s nation”2. This comes from our history as a penal colony, which naturally bred a sense of mistrust and antagonism towards those in power, which then evolved into general sense of irreverence towards pretty much everything.

Compare the treatment of Loki in the first two movies to how he’s treated in Ragnarok. In Thor and Thor: The Dark World, Loki was treated as this sexy anti-villain whom we’re supposed to love to some extent. As one the breakout stars of the MCU, he’s up there with Tony Stark in terms of popularity. But in Ragnarok, if there’s a joke to be had, Loki is pretty much guaranteed to be the butt of it. He’s the one that was subjected to the disgrace of “falling for thirty minutes”, he’s the one who has to suffer the indignity of “get help”, and he’s the one that was humiliated when he was left convulsing on the floor of a spaceship hangar.

Hell, Ragnarok treated the entire Thor franchise with little respect, throwing out pretty much everything except for a few key characters without even a proper goodbye (Tadanobu Asano deserved so much better).

Moving on from that nightmare, let’s actually talk about Dame Edna as a comedic character. You would expect Dame Edna to be in the section about pantomime dames, but as a character, there is very little camp to her. Dame Edna is a satirical character, often used by Humphries to mock or satirise various issues of the time. The character itself is supposed to be a pompous blowhard in the same vein as Hyacinth Bucket in Keeping Up Appearances, she isn’t supposed to be taken seriously. With that in mind, it then allows the character to take a more irreverent approach to the topics that Dame Edna is satirising without explicitly endorsing them.

This clip of Dame Edna is my favourite, it’s an interview she did with the late Robin Williams:

The Joke’s On Us

Relating back to the previous point, a hallmark of Australian comedy (that’s similar to British comedy) is the fact that the joke is usually always on the characters themselves. We laugh at them, never with them.

I spoke briefly on the indignities that Loki had suffered throughout the film, but it’s not just him who suffers humiliation after humiliation, Thor is also subjected to the same from the moment he sets foot on Sakaar, the numerous electric shocks Valkyrie gives him can’t be good for his self-esteem.

This seems to be a trend amongst most scripted comedy in Oz these days, and one of the best examples of this trend is a YouTube comedy series called The Katering Show.

The origin of this idea of “turning the joke on ourselves” is difficult to pinpoint. It can be argued that it stems from the various myths that Australia was founded on. As mentioned previously, the various myths that Australia purportedly founds itself upon (egalitarianism, antiauthoritarianism, the working man’s paradise) results in a culture that doesn’t like it when someone rises too high above their station.

There’s a cultural phenomenon called “tall poppy syndrome” that can be best explained with a comparison. In America, when someone sees a million-dollar mansion and a luxury car, they think to themselves, “Someday, I’m going to be like that person.” In Australia, a person would instead think, “Someday, I’m going to get that asshole.”

So, how does one prove to their peers that they haven’t risen too high? By turning yourself into a joke. That’s why in The Katering Show, McCartney and McLennan are a pair of alcoholics with mountains of personal issues. McCartney is the kind of rules-obsessed, petty asshole who would let war crimes happen, while McLennan is an insecure nutjob who’s one bad day away from going DEFCON 1. By bringing themselves down first, McCartney and McLennan are then able to aim their satire at the more ridiculous elements of food culture without fear of “rising too high”.

This next section doesn’t relate to the previous two, but I wanted to talk about it anyway.3

You all remember this scene from Ragnarok?

When I saw the musclebound Thor trying to so casually slip into the role of Natasha Romanoff, one of the most feminine women in the entire MCU, I was immediately reminded of a comedy tradition that has gone back decades in Australia. Believe it or not, there is a long history of pantomime dames as part of the Australian comedy tradition. As a former colony of Britain, we imported much of our culture from the Isles, and one of said traditions happened to be the pantomime.

What is a pantomime dame? To put it simply, they’re the ye olden version of drag queens.

Compare this showreel by Rob Squire:

To this best of compilation of Rupaul’s Drag Race:

And you can see the similarities between the two.

Now obviously Ragnarok has no drag in it, but it does have a musclebound, knuckleheaded god of thunder trying his best to mimic the words and actions of a lithe, seductive Russian superspy. Part of the humour of pantomime dames and drag performers comes from the synthesis between the masculine and feminine, creating a performance wherein a moustachioed man in a blue dress threatens to rip your arms clean off.

The Aunty Jack Show was a cult classic that aired during the seventies. On the surface, it has similarities with Monty Python, but the show had aired long before the Pythons. The show is about the misadventures of an obese, moustachioed pantomime dame, whose go-to solution for any problem was either a threat of violence (“I’ll rip your bloody arms off,” she would often say), or just doing away with the threats entirely and knocking people out. Part of the humour of this show is just how unconvincing Aunty Jack is as a pantomime dame. Panto dames at least try to be convincing as a woman, Aunty Jack just does away with this veneer and instead plays up the masculinity of the character to absurd degrees. It’s similar to the aforementioned scene in Ragnarok because in addition to Thor being just as unconvincing as Aunty Jack is, Thor is holding such an absurdly large weapon that it makes any attempt at mimicking Nat impossible to take seriously.

Watch as the Aunty Jack Show celebrates the advent of colour television:

The Adventures of Priscilla, Queen of the Desert

Did you know Lord Elrond of Rivendell, The Red Skull and Agent Smith all did drag at one point?

Aldrich Killian from IRON MAN 3 was also in this.

The Adventures of Priscilla, Queen of the Desert is about a drag queen called Anthony “Tick” Belrose who decides to take his drag act to a hotel in Alice Springs (it’s located right in the middle of Australia) that’s managed by his estranged wife. For the ride, he brings along his friends Bernadette Bassenger and Adam Whitely and the three of them set out in an old tour bus that’s christened “Priscilla, Queen of the Desert”.

I’ve included this film in this section because it’s a testament to just how much influence Australian comedy owes to pantomime dames that one of our most well-known films happens to be about drag queens. This has a different meaning to different people, (some of) the queer community sees this as a landmark work in queer representation, Australian cinephiles see this as just another movie in our cinematic tradition, and the local Filipino community sees it as an insult to the dignity of Filipina women.

It has an… interesting reputation at the very least.

In my opinion, Priscilla is a movie that is a product of its time and a product of the people who created it. I’m not too thrilled they got the cisgendered Terence Stamp to play a transgendered woman. I’m not too thrilled that the only Filipina character in the movie is portrayed as a gold digger who can shoot ping-pong balls out of her vagina. It’s not my favourite Australian movie (that honour belongs to Fury Road), but I can’t hate a movie that represents the queerer members of our society in a positive light too much. If you want to see Hugo Weaving, Terence Stamp and Guy Pearce play roles they’re not normally known for, give this movie a watch.

I could talk about numerous other elements of this movie and how they’re similar to the various characteristics of Australian comedy. Like the fact that Thor is oddly more direct in this movie— “Fine, then point me in the direction of whoever’s ass I have to kick.” Some of the jokes have gotten darker— “Bleh! It’s me! And then he stabbed me. We were eight at the time.”— and dryer— “Piss off, ghost!” But honestly, explaining comedy feels like I’m dissecting a puppy without anaesthetic, I’m ruining a good thing. So, if any of the works I’ve shown you in this article interest you, go and check them out, Oz can produce more than strange tasting spreads for your toast and the occasional drop dead gorgeous celebrity.

The Bus Stops Here: The Marvel Podcast-ematic Universe Previous
Phoenix Film Festival Review: WON'T YOU BE MY NEIGHBOR? Next

Sony Tries a Gambit in the MORBIUS Trailer