BLADE: The Bleeding Edge of Cinema

Vyce Looks back at this classic with new eyes 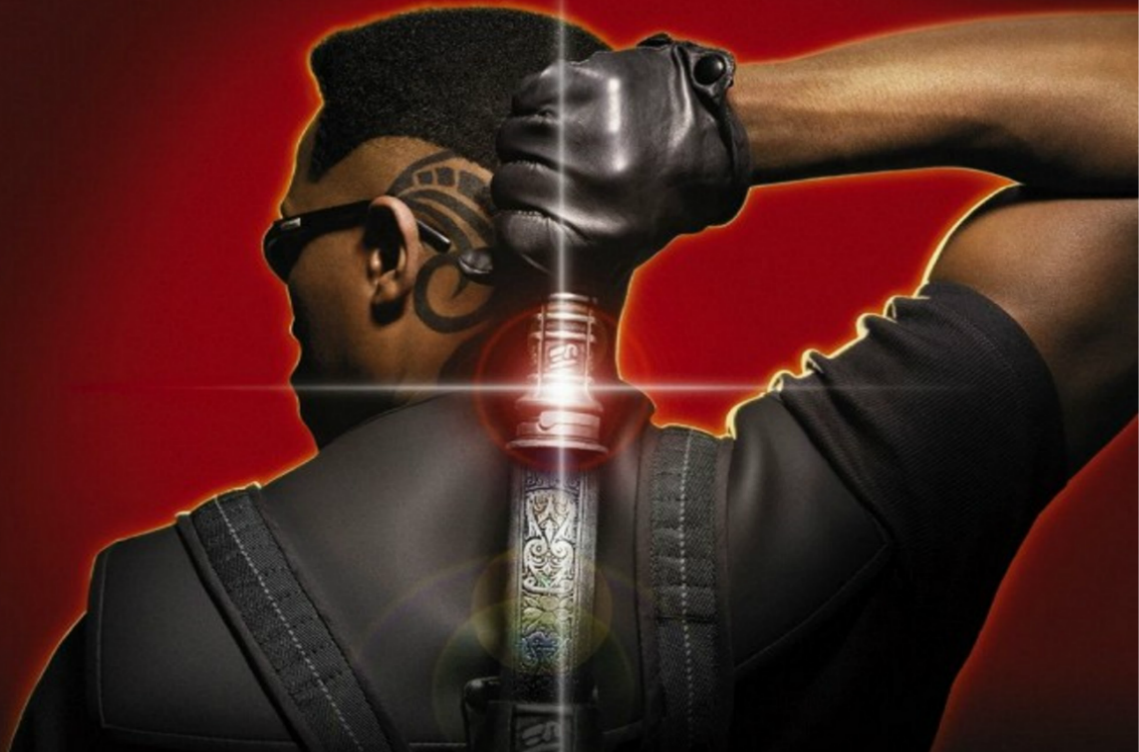 It is difficult to quantify just how important Blade is, not just for comic book movies, but film in general. Even now there is still refusal to recognize its impact and its place in history. Some dismiss it via technicality as “not really a comic book movie”, while others fail to see the deeper thematic elements at play that go far beyond a pulpy monster mashup. I am able to look back at that moment in time during its debut and remember its significance to me personally and the rapidly evolving cinematic landscape. Moreover, reappraising this movie after 20 years of growth and change make me realize how next-level it really was.

The release of Blade in 1998 places it within a significant turning point of cinematic history. It sat in the transitional period between conventional ’80s/’90s tough guy action movies and more genre-based fare gaining dominance. It drew from the establishment of CGI special effects (initially the hallmark of big budget studio tent pole blockbusters) becoming commonplace among movie productions of all shapes and sizes. In the realm of comic book properties and adaptations, it came a year after the notoriously derided Batman & Robin, a film which put that particular film adaption franchise out of commission for nearly a decade. It also followed a run of unsuccessful attempts at films featuring black superheroes such as Spawn and the disastrous Steel.

Blade predates both the X-Men (2000) and Spider-Man (2002). While those movies and their subsequent sequel entries are considered by many to be the catalyst for the current dominance of the Marvel Cinematic Universe, I feel that Blade helped to prime audiences for the superhero special effects blockbuster boom: films which feature character-driven action-movie stunt work in concert with CGI set pieces. Its hard-R, black leather, darkly hued aesthetic also predates the explosive success of the The Matrix as well as the modestly successful but nonetheless enduring Underworld and Resident Evil franchises.

Growing up, I was enraptured by the sight of one of my favorite actors transforming himself and the entire action movie dynamic into this supernatural force of nature. In hindsight, I am equally amazed by how racially charged the film can be and how that permeates so much of the story, elevating what could easily have been a typical run & gun or slasher flick B-movie with some legitimately provocative components. Blade is a peculiar mashup of supernatural, sci-fi, and Hong Kong action elements, but I’ve grown to appreciate its links to the famous Blaxploitation genre of films more and more. This article  from BlackNerdProblems highlights the structural and tonal similarities between the film and Blaxploitation of yore, with the film ultimately echoing the classic setup of black heroes fighting against The Man.

The character himself was originally nothing more than a cliche of contemporary Blaxplolitation stars, but Wesley Snipes infuses Blade with a deft combination of stylish street swagger, samurai nobility, and feral aggression. Stephen Dorff plays the main villain Deacon Frost, and while he cant match the physicality of Blade/Snipes, he makes up for it with a sinister cerebral approach laced with invective dialogue. Frost having a tense verbal standoff with Blade in an attempt to take advantage of him and hurling the “Uncle Tom” insult at him is a seriously loaded scene that also works beautifully as a character moment, as Frost’s insults eventually trigger a lightning reaction of fury from Blade; you simply don’t talk about a black man’s mother.

Blade contains the sub-textual and at times overt inclusion of serious social issues that are still relevant today. The movie takes place in a nameless city (production notes indicate it was partially filmed in Los Angeles) that stands in for any diverse metropolitan area. The control the vampires exert upon day to day life (“…politics, finance, real estate; They already own half of downtown”) is a flexible device that could be a stand-in for any number of insidious organizations in our world, be they real or imagined (the Alt-right or the Illuminati, as per your preference.) The film’s take on the myth of vampirism is also a unique approach that touches on our real world issues. While vampires are most certainly supernatural in Blade, a significant amount of time is taken to flesh out the biology of it all. It is overtly likened to a sexually transmitted disease, reflecting the HIV and AIDS epidemic brought into our collective social consciousness in the early and mid-’90s. There is also a reference to Sickle Cell Disease, a condition known to be more prevalent among people of African decent. I appreciated this mixture of real world ideas and issues that affect marginalized people being meshed together in this way, a great case of effective world-building to help cement some really over the top insanity.

One of my favorite moments of dialogue that encapsulates the entirety of the textual thematics at play takes place in the latter half of the movie when Karen (N’bushe Wright) is being held captive in Frost’s penthouse fortress. Frost once again uses racially and sexually charged invective to try and “turn” Karen, noting her “great skin” and mocking Blade for not “giving it to her”. Karen, a brilliant and powerful black woman in her own right, sees right through him and twists the situation with a counteroffer of her own, promising a cure for his pitiable ailment. Frost snaps back with the fiendish line: “I’ll tell you what we are sista: We’re the top of the fucking food chain.” Shades of the historic sexual abuse of black women, dehumanization of black people, and racial rhetoric once again interwoven into a brilliant character moment brimming with subtext.

Speaking of sexuality, certain elements of the movie which relate to that topic resonated with me as a teen and continue to do so to this day, while there are other parts that I couldn’t truly appreciate until the experiences of my later years. The sexuality of the black man and woman is somehow still a strange sort of taboo in our culture, a taboo designed dehumanize us and rob us of our agency. You know what I’m talking about, but let me spell it out for you: the prevalent perception of black men as lustful savage beasts that tear up women with their big dicks, or the degradation of black women as hoes and “thots” when the sobering reality is that they are victims of sexual abuse and assault in alarming numbers. My peers and I had to deal with this to varying degrees. In the schoolyard and locker room, I was constantly pressured to chase sex, whereas the girls I knew (or even the ones I didn’t know that I saw on my daily commute) were constantly hounded by dogs young and old lusting after them. The whole experience is sickening. I found it fascinating how Blade works through a lot of that nastiness in its own way. I spoke about how moments of dialogue speak on this, but I was particularly moved by what happens in the final act.

Blade is a violent contradiction of tempered focus and animal rage, an internal struggle which comes to a head in the climactic battle. Drained of life after the resurrection ritual for the Blood God, Blade requires blood to survive. In desperation, Karen offers her own blood. Blade, no longer able to withstand, lets the thirst take over and embraces her like a a devouring predator would its prey, the two writhing in agonizing ecstasy, the sweat glistening off their dark skin. Soon, the pain becomes too great and Karen quietly pleads for Blade to stop. Blood drunk, he ignores her pleas, but eventually comes to his senses and releases her, revitalized and ready to put an end to their tormentors. I am not a superhuman hero, but the description of this encounter describes many moments of intercourse with my wife to an alarming degree, her demeanor and anatomy at times ill prepared to receive me. All throughout my adolescence and maturity, I had to fight with the hormonal storm that we all go through while also contending with the toxic messages being pressed into me that would debase me as just another animal to be put down. Seeing this conflict expressed outwardly on the big screen was and is, in no small way, life changing.

Look…If me getting uncomfortably candid with my sexuality is what it takes for me to contextualize the greatness within Blade so that you all recognize and understand it, then I’m willing to take that leap.

Perhaps you were expecting a more straightforward retrospective on this action movie classic. There are already plenty of articles that can get into the minutiae of financial records and tell you how important the movie was to Marvel comics and the eventual MCU/Disney empire. Elsewhere, you are sure to find pieces on the cultural importance of Blade as one of the first successful black superhero movies and what that success means to live action adaptations of black superheroes in the future. My goal here instead was to hopefully allow you to think of Blade in a new light. Not just as a stepping stone in comic book movies or a fond bit of nostalgia, but to show how even the most absurd of films can approach deep tissue themes via the most unlikely of angles, and how the most outlandish and seemingly inconsequential of stories can resonate so profoundly and deeply with their audience. Whatever awaits us, I won’t cast it aside as mere corporate fluff, not when I know there are whose lives will potentially be changed, just as mine has been.