Blade just wants to be loved 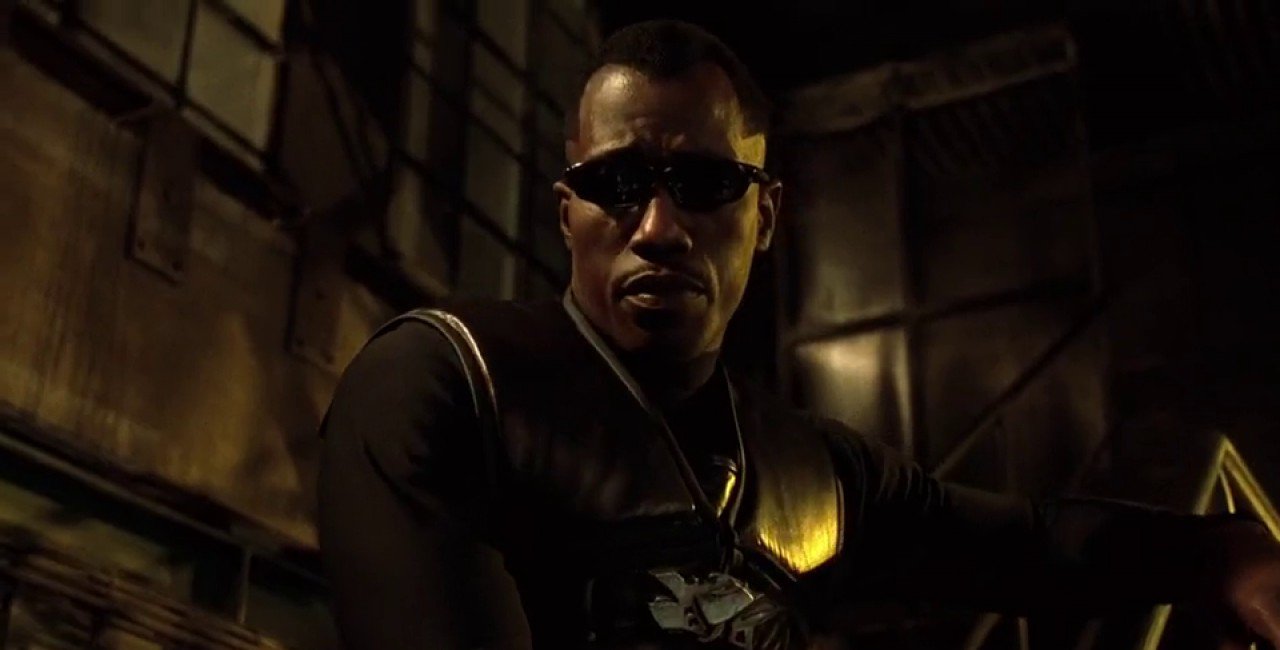 In 2002, Guillermo del Toro, then a 36-year-old fresh off directing The Devil’s Backbone, one of his seminal Spanish-language works, began work on his first blockbuster. It was a sequel to Blade, a vampire movie that burst onto the scene in 1998 with the most exciting black superhero we had seen in ages (or at all), explosive action, and deep mythology drawn from the Marvel comics that birthed it. Blade tapped into a reservoir of racial and sexual dynamics, much of which was entirely lost to me until Vyce’s excellent post about it. Blade II needed to deliver. The result is somewhat of a mixed bag. On one hand, the sequel lacked much of the subtext in the first movie, opting for a far-too-subtle allegory on the experimentation on black men. On the other hand, it tapped into a pulpier, more bombastic version of itself and luxuriated in a more vibrant world – the world of Guillermo del Toro’s monsters.

Vampires appear to be del Toro’s favorite kind of monster, making him a good match for the Blade trilogy. The human-appearing vampires in Blade II are elegant, their human faces hiding their true nature. Of course, this is partly an excuse to never have to put actors in a bunch of prosthetics, but del Toro understood what made Wesley Snipes such an icon in this role. He understood what audiences loved from a Blade movie. Blade is a singular force on his world; as the Daywalker, the rare vampire who possesses all of their strengths and few of their weaknesses, Snipes plays Blade like a man who knows he’s the biggest and baddest in the room – which is why it’s all the more touching when we find out that between the first and second movies he’s rescued Whistler from being a vampire captive. Blade may be unique, but he’s not alone and he doesn’t want to be.

This is why it’s especially fun to see him bounce off the Bloodpack, a group of elite vampire warriors assembled to kill Blade. Damaskinos, the lord of the vampires, has ordered them to work with Blade to kill Nomak, Damaskinos’ son. It turns out that papa has turned his son into a Reaper, a new strain of vampire. Nomak is roaming the Czech Republic turning vampires into Reapers, threatening humans and vampires alike. Blade and the Bloodpack are tasked to stop him before it’s too late. The Bloodpack is one of my favorite teams in the Blade Trilogy. Their late-90s, early-2000s leather getups are emblematic of the time in which the movie was made but each of them has a unique look, weapons, and fighting style. They are the perfect accompaniment to a Blade movie: they’re interesting but not the focus, they’re cool but never as cool as Blade, and they stay firmly in the shadowy edge of good and bad.

Two of the Bloodpack stand out: Donnie Yen (who also coordinated the fights), as Snowman, who forgot his shirt in the wash but had to go hit the clubs anyway (with his trusty breastplate). He’s the rare actor who can go toe-to-toe with Snipes (or perhaps it’s the other way around) in the fight department and it’s a joy to watch him here lay waste to some Reapers.

The other notable member of the Bloodpack is of course, Ron Perlman, a frequent del Toro collaborator. Here he’s Reinhardt, who isn’t just a racist thorn in Blade’s side, but also one who challenges Blade’s supremacy atop the vampire food chain. It’s what makes his comeuppance all that much more satisfying. Blade and his team-up with the Bloodpack take up most of the second act and I only wish that the Bloodpack was better developed as characters. Reduced to their individual fight scenes and without a lot of personality, the other individual members of the Bloodpack don’t get much opportunity to develop any kind of rapport (antagonistic or otherwise) with Blade. Part of what makes these movies so fun is Blade’s dry wit; it’s so much fun to watch Blade’s verbal sparring throughout these movies that I wish there had been more devoted to that.

Also interesting is what del Toro does with Nomak. Del Toro treats Nomak and the Reapers with great care. A regular vampire turned inside out and made into something grotesque by his own father, Nomak proclaims that he hates vampires and vows revenge on his father. In the third act, Blade and Nomak meet for the last time in a fight to the death. While the fight is stylish and fun, that’s not all there is. You see, del Toro gives Nomak the last word, a short monologue that allows him to impart to Blade and the audience one last plea to understand where he’s coming from – sure, he’s murdered some folks, but he’s a victim, too.

In his last scene, when he puts his hands on the sword Blade has plunged into his chest and delivers the final blow, it’s almost poetic. Make no mistake – Nomak is a villain and a threat to the world. If he hadn’t done it, Blade surely would have. He’s taking his destiny into his own hands, acknowledging his defeat, and freeing himself from torment. The decision to allow Nomak to deliver the last blow is vital to shaping how we see Nomak both as a villain and a victim and helps to cast the movie before it in a slightly different light. It also helps us think about Blade differently; here is a man who has reasons to tell humanity he’s done with them. After all, humans are frequently complicit in upholding the vampire order and killing other humans. What does Blade owe them? Vampires have taken almost everything he values. This comes to the forefront when Blade infiltrates Damaskinos’ compound and the vampire lord disables him with the intent to dissect and experiment on him. Whistler, the one person in the world he trusts with his life, is the one who saves Blade. Their scene, with a silent and prone Blade, injured and possibly already dying, is far more touching than would be in most blockbusters. These movies have always been about Blade, but also about Blade finding a home with Whistler in a world that needs Blade but doesn’t acknowledge him. Blade continues to work on behalf of humanity, anyway, doing the tough and thankless work of a hero. He, like Nomak, gets to decide his own fate. Sometimes that’s what is most important.

Del Toro was recently nominated for an Academy Award for The Shape of Water, a story about a mute woman who finds joyful companionship with a captured fish creature from South America. I hope audiences realize that the man who directed such a beautiful, personal tale is the same man who directed a vampire blockbuster, too. Rather than shunning his past work as the efforts of a man who needed a paycheck, I hope they see that Blade II is a sincere labor of love.