Captain Benjamin Sisko: It’s Easy to be a Saint in Paradise 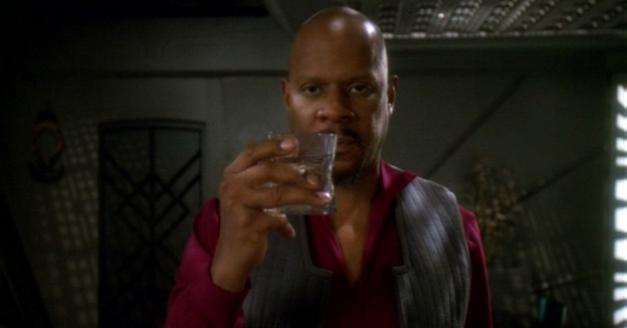 “Kirk or Picard?” — one of the ultimate nerd debates of the 20th century.  The braggadocious and cunning ladies man or the diplomatic and morally straight Boy Scout?  It is the question at the heart of every Star Trek fan and likely will rage on for centuries.  And while James Tiberius Kirk and Jean-Luc Picard are two of the most iconic characters in all of science fiction, neither are nearly as interesting, nor as complex, as Captain Benjamin Sisko, played by the wonderful and underappreciated Avery Brooks on the fourth series in the Star Trek universe, Deep Space Nine1.

When we are first introduced to Sisko, he is in the midst of the most difficult moment of his life: the death of his wife at the hands of a Borg-assimilated Picard.  Instantaneously, we’re both introduced to our first Trek-lead with a sense of grieving, loss and anger, as well as our first family man at the head of a Starfleet vessel.  Soon after, Sisko is promoted to oversee Deep Space Nine, a Bajoran space station at the edge of a wormhole leading to another quadrant of the galaxy light years away.  In a series that has always prided itself on its progressive and multicultural themes, it isn’t until Sisko takes over command of Deep Space Nine where a real reckoning of the United Federation of Planets’s colonialism is explored and warfare erupts; this allowed Deep Space Nine to boldly go not only to the easy thematic territory of years and generations past, but to wade into the murky and nebulous universe as it truly exists.

Right off the bat Deep Space Nine establishes that Sisko is not just going to be just another Picard.  His family life separates him from the captains of Starfleet’s past, as does his more laid back nature with his crew.  Picard sipped Earl Grey tea and read Shakespeare alone and Kirk was a US History and Constitutional scholar who kept a tight inner circle of only Bones and Spock, but Sisko loved cooking New Orleans cuisine for all of his colleagues, spending quality time with his son, and playing baseball. The series pilot even pits two of these men in the same room, with Picard giving Sisko his charge to helm the station, and they couldn’t be any more different.  Sisko is unafraid to express his displeasure with his assignment and his distrust of Picard, something Picard’s aloofness would never allow.  With Picard, there is a sense of unapproachable honor, an almost idyllic humanity that shone above else—the Enterprise was the flagship of Starfleet, and only the finest were among its crew and her captain chief among them.  With Sisko, however, we’re presented with a man who is approachable, relatable and, most of all, human.  In fact, once The Dominion are introduced and war is on the precipice, Deep Space Nine becomes unlike any other show of its era, and Captain Sisko becomes a protagonist ahead of his time.

The prestige television explosion of the 21st century has been most notable for its exploration of ambiguous and opaque characters, be they anti-heros like Jimmy McNulty of The Wire or villains like Breaking Bad‘s Walter White or The Sopranos’ Tony Soprano.  And while I don’t consider Benjamin Sisko to be nearly as flawed in character and ethics as these examples, it would be intellectually dishonest to deny that the moral quandaries which Deep Space Nine presents Sisko with fit more into this realm of complicated soul-searching than they do the pristine and utopian world of previous iterations of Star Trek.  Sisko is no less righteous than Picard or Kirk, and his intentions are equally as true.  But in war there are rarely black and white answers, and showrunner Ira Steven Behr never allows the show to cheat, instead making every unfolding conflict a new shade of gray.

Partially because of the shows’ episodic nature, and partially because of the characters’ unimpeachable nobility and intellect, the solutions to Picard and Kirk’s problems always felt like a matter of “when.” There is never a sense that the questions asked and answers given have any effect on the universe at large, merely that the hour has ended and that the answer was found. With Deep Space Nine’s serialized storytelling and descent into the quagmire of the consequences of war, Sisko’s solutions are a never ending question of “how?” How will this affect the Federation and the ongoing war?  How will this affect the crew and Sisko?  How many new issues have arisen because of this new solution? There is no beaming back to the Enterprise for a happy ending and new adventures for Sisko. If he isn’t trying to prevent The Dominion from emerging victorious over the entire Alpha quadrant, he’s charged with the tedious task of managing a space station at the edge of the new frontier.

Sisko’s journey takes him through mental, physical and spiritual depths not seen by the other captains in the show’s history.  Where Kirk and Picard were observers and explorers, Sisko and the DS9 crew are the boots on the ground in the middle of galactic war.  Kirk never had to personally hunt down men, friends even, who betrayed Starfleet and led a band of rebels to attack Federation starships with biogenic weapons.  Picard never had to decide whether or not to lie to the Romulans about the assassination of their Ambassador in order to get them to join the war efforts that threaten the galaxy.  While Star Trek of years past always put the Captain as the physical protector and bearer of burdens for his crew, Deep Space Nine put Sisko in a position to sacrifice his own mental wellbeing and self-respect in order to save not only his crew, but his family, entire planets, and a quarter of the entire galaxy.

One of the reasons Star Trek has endured is its unflinching fearlessness to progressively push the envelope.  In 1968 there weren’t many, if any, shows with multicultural casts. Kirk and Uhura’s kiss in third season episode “Plato’s Stepchildren” was a landmark for interracial romance and coupling on television.  Both The Original Series and The Next Generation pushed fans to give up Cold War fears and embrace peace and hope in an era of fear and pessimism.  And while there are arguments to be made as to how Deep Space Nine lives up to Gene Roddenberry’s ideals and vision, it can’t be argued that it thematically pushed the limits of what science fiction television could do and what stories it could tell.

In thinking about this week’s release of Black Panther, I couldn’t help but think about how the cinematic superhero landscape feels as oddly white and staid as Science Fiction did in the early nineties.  Star Wars had been dormant for a decade and only featured one major character of color, who didn’t even show up until halfway through the trilogy of films.  Other science fiction franchises, such as Planet of the Apes and Alien may have dealt with race or featured characters of color, but neither were interested in diverse representation at the forefront of their casts.  Even my dearly beloved X-Files, which would debut in the same year as Deep Space Nine, is so white I’m pretty sure a jar of mayonnaise was a guest star at one point.  Mainstream Science Fiction was a predominantly white and male club, and Star Trek was no exception.  Sure, there had been Uhura and Geordie, but center stage were always white men with authority over the rest.

And what do you know? The could be said about the MCU!  We’ve got your white “moral centers” and your white “playboy-philanthropists” and those other melanin deficient strong men at the forefront of superhero cinema, but exploring gray areas are hard to do with archetypes and half measures.  But, with the introduction of Black Panther, both in Captain America: Civil War as well as his first solo adventure, and Deep Space Nine, both the MCU and Star Trek introduced more complicated, honest, and conflicted depictions of what being a superhero or captain are, and used men of color to fill these complex roles. T’Challa and Benjamin Sisko are diverse beacons in a sea of monotony, both in terms of ethnicity as well as internal characteristics.