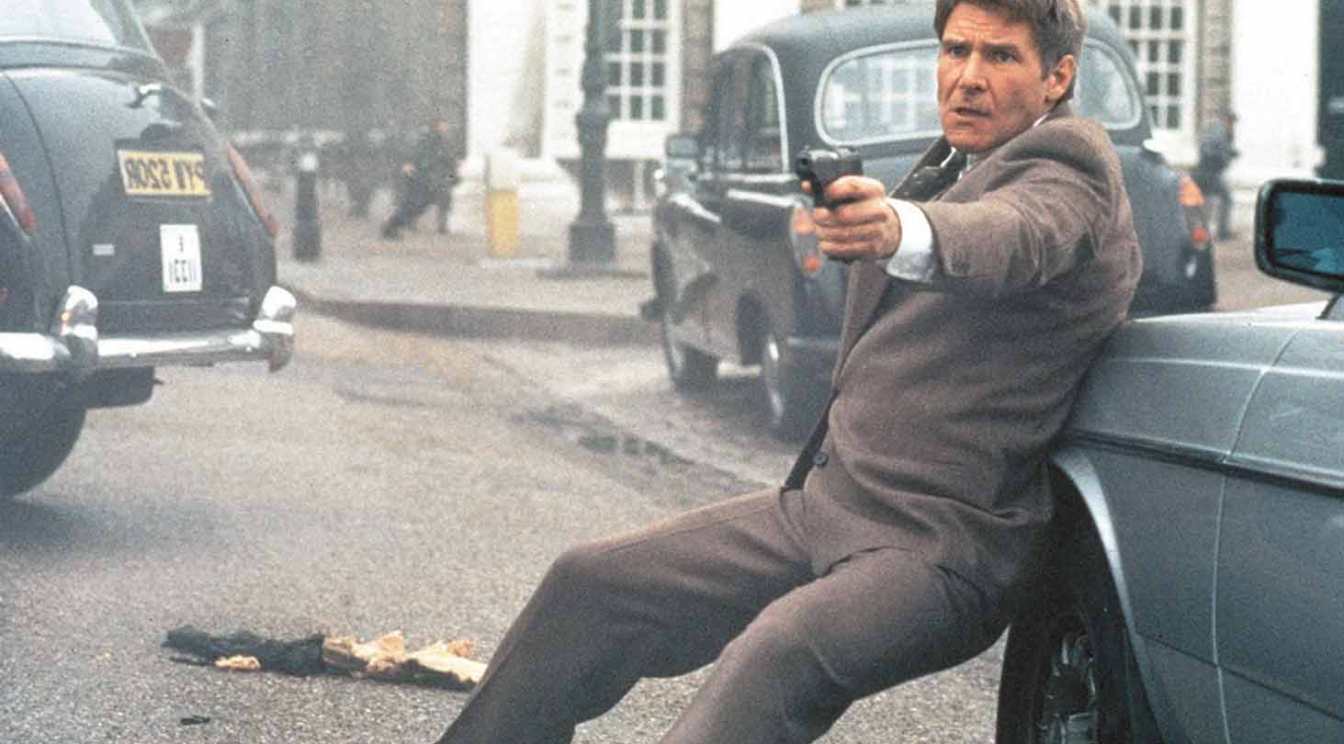 I have a confession: Patriot Games isn’t my favorite Jack Ryan movie; that title belongs to Clear and Present Danger. But what makes Patriot Games unique in the Ryanverse is how it uses its personal story as the primary driver for the plot. Just as Clear and Present Danger is an intense political thriller, Patriot Games is a smaller-scale personal movie about a man simply caught in the wrong place at the wrong time, but who can’t help but do something about the bad guys. The movies are so different that they’re almost about two different Jack Ryans, which is funny considering Patriot Games is a sequel and this is Harrison Ford’s first time playing Jack Ryan, a character originated by Alec Baldwin in The Hunt for Red October.

The movie opens with Jack and his family on vacation in London. They’re caught in the middle when Sean Miller (Sean Bean), an IRA terrorist, attempts to kidnap Lord William Holmes and his family. Jack springs into action, falling back on his military training and killing Miller’s brother — for his quick thinking, he gets shot. While he recovers, he testifies against Miller who finally gets a good look at the American tourist who foiled his plan and killed his brother. This sets Jack on a course to collide with Miller’s personal vendetta as he plots again to take Holmes.

In his first outing as Jack, Harrison Ford imbues him with a dry wit and allows him to show exasperation, confusion, and fear in the moments when he’s up against Miller. Though he was in his mid-50s by the time he plays Jack, Ford still has a youthfulness that was bizarrely lost in the next two incarnations, Sum of All Fears and Shadow Recruit, which cast actors with actual youth. Chris Pine was far more suited to the role than Ben Affleck ever was, though I believe John Krasinski is the best Jack Ryan to date, taking Ford’s everyman quality and doggedness and combining it with a young man’s action chops.

Patriot Games is almost more about Sean Miller than Jack, even though the latter gets far more screen time. Knowing Miller’s motivations requires you to know at least a little about the state of Ireland and the United Kingdom at the time. Patriot Games came out in 1992, against the backdrop of The Troubles, the decades-long armed conflict between the IRA and England.

Sean Bean, who at this point had been acting for roughly 10 years, gives Miller a predatory glint in his eye. Miller’s motivations for kidnapping a British Lord are somewhat muddy, but aren’t that important to the movie because his goals shift even as his own team remains unaware that they aren’t calling the shots but rather are just along for the ride. At some point, kidnapping the Lord became his secondary goal, only a means to get to the United States where he can find Jack.

This creates a fantastic second act, wherein Jack feels the paranoia of being hunted once Miller escapes custody and is on his way to the United States. Miller is ruthless and out for vengeance, focusing only on kidnapping the Lord and killing Jack. He’s willing to shoot Cathy and Sally in broad daylight on the highway and make it a spectacle.

It also turns a personal, geopolitical thriller into a tense workplace thriller as Jack returns to the CIA to find Miller. It’s always a delight watching Jack think, weave in and out of the puzzle, moving pieces around and trying to fit them together. More importantly, it’s what makes Jack a hero. It’s not carrying a weapon; it’s using his brain to root out someone who wants to hurt people, using the technology at his disposal and good, old fashioned intelligence to connect the dots.

The way director Phillip Noyce shoots Patriot Games up close, putting us right into the flames licking the sides of the screen as Miller makes his escape, gives the movie a dynamic feel and he improves on it dramatically in Clear and Present Danger. The third act is a wild high-wire act on the high seas, an exercise in masterful filmmaking, even though Clancy notoriously disliked the ending, saying it was “too outrageous.” I can understand that, though I think Clancy’s realistic geopolitical intrigue is a lot like eating the most delicious vegetables. The film, on the other hand, is a lot more like finishing those veggies with a nice, decadent bowl of ice cream — in the form of Miller trying to kill Jack with a boat hook while on a speeding, flaming boat.

Tom Clancy’s books are classics, and part of the reason is that he frames conflict itself as being eternal. The names, faces, and means may change but their need to gain power or tear down power is a commonality across time and geography. Clancy’s best known for his Cold War heroes; the reason Jack Ryan has stood the test of time is because he embodies a goodness that is relevant no matter what kind of conflict we’re embroiled in, or what the world looks like. Patriot Games, because it captures precisely what makes Jack tick – his timelessness, his commitment to his family, his desire to do good – stands the test of time. It may have come out more than 20 years ago, but its themes of doing what’s right carry on. It’s an especially important lesson in these dark times.

Stream of Consciousness: Surviving September Previous
Dad Media Month: SPLINTER CELL and the Idealization of... Next