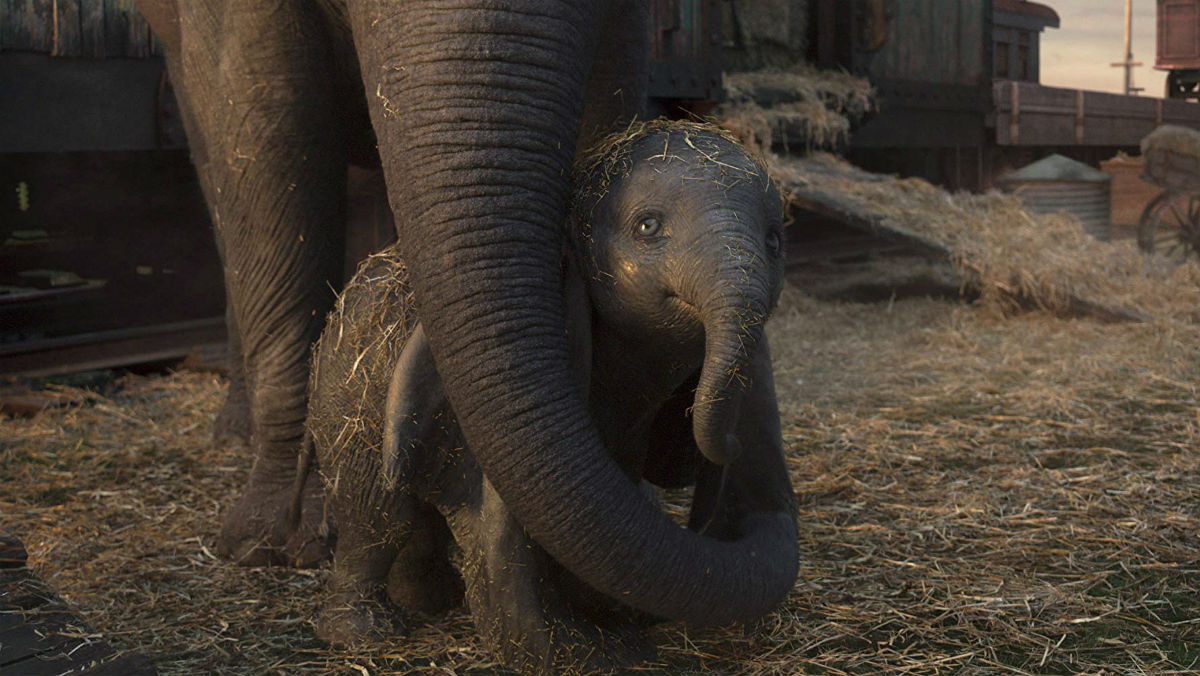 When a Dumbo remake directed by Tim Burton was announced, I took it with a big shrug. I have no particular attachment to the original Disney animated landmark nor the filmography of Burton, although I respect their particular achievements. But as the project continued to take shape, I found myself surprisingly interested. Colin Farrell and Eva Green are two of my favorite actors, and the opportunity to see them sharing the same screen was exciting. Not to mention Michael Keaton and Danny DeVito reuniting with Burton. Then the trailers came out and, yup, I was in the bag. And before I knew it…I was having a pretty fun time at the theater.

There are compelling arguments to question Disney’s recent tendency of remaking their animated classics. A good part of what made them classics to begin with is that Walt Disney and his visionary team of artists understood that some stories and situations work better in animation than in live action. Animation has a flow and a looseness with the rules of the worlds it creates that movies with real humans don’t. But with the improvement of CGI effects as time went on, it’s logical that studios would want to push the boundaries and see if the unique awesomeness in 2D animation could be finally achieved in photorealistic 3D.

Dumbo in particular was a tricky challenge because it’s a movie where all the main characters are animals. In other words, the perfect setting for using animation as your go-to medium. To shake things up, the concept of the remake was modified so it made more sense to happen in a live action setting. More specifically, humans were going to be a significant part of the show.

The key element Dumbo needed to nail is, of course, the titular elephant himself. Dumbo comes to life with beautifully textured CGI effects that make him look realistic enough to blend in seamlessly with humans, but cartoonish enough to generate a sense of wonder with his presence. His tender eyes and showy facial expressions succeed at telling what’s going on inside his mind. It’s a design that makes the elephant instantly likable and endearing.

Dumbo is a story about the cruelty that comes with forcing animals to perform in a circus, so Burton knew that to highlight that, you need to take some distance from the humans and see the horror through the perspective of Dumbo himself. When the camera switches to Dumbo’s eyes, we notice that what the circus audience considers a good time is a suffocating social anxiety for the elephant. The screams, the cheers and the laughs create a sense of awkwardness and humiliation that Dumbo has to fight to overcome as the movie moves forward. In the end of the day, the lack of humanity in the circus organizers comes to bite them back when the show happens. None of the performances goes exactly according to plan, and they put lives at stake thanks to their incompetence. Because something that makes a profit at the expense of someone else’s suffering is doomed to have toxic consequences for the world at large.

It’s under these harsh circumstances where Dumbo discovers his potential. His ability to fly goes through a compelling evolution that takes very different contexts throughout the film. At first, he flies simply because he happened to have a feather in front of him. It’s treated as a funny coincidence. When he flies in circus shows, he does it out of survival. He’s far from comfortable doing so, but it’s the only way he knows to stay safe in an environment where the odds are against him. He knows that if he strikes back, the odds of success are low. Finally, when his mother and human friends are in danger, he pushes himself to fly out of a desire of heroism, which ultimately gets him his much deserved freedom. For the first time, flying is not a torturous activity he has to perform for a few minutes of entertainment, but an effort to actually serve those in need. Even the feather that triggers the ability becomes redundant, because he has the necessary will to pull it off.

Dumbo is obviously the heart of the movie, but his journey is well complemented by World War I veteran and professional horse rider Holt Harrier (Colin Farrell), who lost his left arm in the conflict and has to adapt to a familiar place where he doesn’t quite fit anymore. Like Dumbo, Harrier is an outsider who has a hard time finding the comfort of shared experience. People patronize him and treat his war veteran status as a sales gimmick rather than the source of his emotional burden. He’s so used to things going wrong that he has relegated himself to go with the morally questionable flow of the Medici circus out of a misguided sense of safety. No longer being in the war and the absence of his horses in the circus left him a man without a purpose. As Harrier gets to know his estranged children and Dumbo, he slowly recovers his sense of belonging. The planned murder of Dumbo’s mother and the layoff of several circus performers is the necessary kick in the head he needed to fix his moral compass and remember what he’s good at, i.e., protecting animals and assuming leadership in hazardous situations.

A reason why I liked Harrier is that it displays a facet of Colin Farrell’s acting talents that’s not common to witness: earnestness. Farrell infuses Harrier with a perpetual sense of melancholy that effectively conveys life at the Medici circus as rather miserable. But in his moments with Dumbo, Farrell shows the hope inside Harrier gradually making its way out.

As for the other performances, Eva Green is always entertaining when she plays women who use their alluring charisma to hide a painful backstory. Finley Robins and Nico Parker play generic Disney kids, but they do a decent job contrasting their innocence and ingenuity with Farrell’s melancholy. Michael Keaton is at his best when he’s projecting manic energy in spades, so an over the top cartoon villain was a good outlet for that. And Danny DeVito helps to take lighten the mood in the inherent sadness that comes with the premise.

What sealed the deal for me was the ending, where Dumbo and his mother return to the jungle in Asia with other elephants, elegantly foreshadowed when Dumbo witnesses the bubble show at the circus. Dumbo proceeds to fly over it, free from any pressures and with a bright future ahead. In a world where fauna in entertainment is still normal in certain sectors, I applaud a movie that promotes the idea that wild animals should be left alone, but taken care of. With that said, I couldn’t help but feel a schism between said message and the fact that Holt is seen riding a horse in the newly reformed Medici circus, which takes pride in its lack of animal cruelty. I think it’s safe to assume that under Holt’s care, the horse in a healthy state. But it did leave me wondering about how we, as humans, prioritize animals in our society. Why are horses performing shows considered more acceptable than elephants or orcas? Is it because horses are considered domestic and they’ve spent pretty much the entire history of mankind as a creature of human service? Honestly, I don’t know. I constantly think about our relationship with animals, and I end up wrestling with myself all the time. It’s a complex subject, and as much as I enjoyed Dumbo, I think it would have benefited from delving deeper into those matters. Especially considering that Disney can be great at it. It’s worth noting that the conclusion would have been tighter if it clarified the fate of the other captive animals after the circus was burned, though one could argue that’s a blank that can be filled by audience interpretation.

Dumbo could have definitely used some polish when it comes to its treatment of animal rights. But in the end of the day, its heart is in the right place. It manages to carry itself with enthusiasm, some finely executed arcs and Tim Burton’s knack for fantasy spectacle. There are films with elements that, if executed in a specific way, can earn a special place in our memory. In my case, if I see an unapologetically sincere movie with an adorable elephant, Colin Farrell and Eva Green that goes against animal abuse, I’m simply going to fall for it.

Hozier’s “Shrike”: Butcherbirds, Brambles, and... Previous
The Second HOBBS AND SHAW Trailer is All About Family... Next