A story of big movies, bigger creatures, and untamed entertainment. 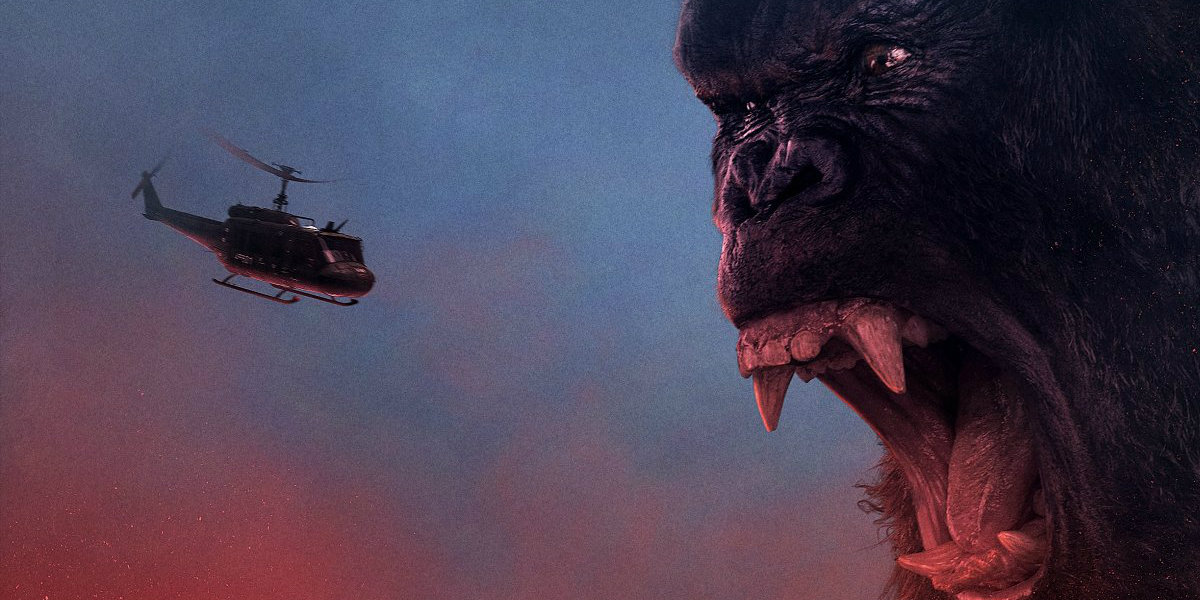 The creatures that endure in the public consciousness for centuries tend to be ill-defined – shadowy menaces, alluring in their danger as much as their mystery. Kong, by contrast, is a massive, hairy, open book of an unnatural beast. How’d he get so huge? He was born like that, coming from a place where it’s normal. What makes him tick, what does he want? The same things most apes tend to want, as we understand it: base urges, freedom, survival and comfort (though his size makes that last one difficult).

Kong doesn’t really represent any kind of deep-seated, unexpressed fear or desire of the collective unconsciousness. He isn’t even much of a venue for character drama, like most cinematic animals tend to be: Every incarnation of the character since 1933 has had him as the sole centerpiece of the story, with the human reaction to him being awe, or fear, or fascination, rather than any central conflict.

This is really what the big ape represents, why he still has a place in the culture beyond the still-striking special effects of his original incarnation: Kong is entertainment. The awe that moviegoers have now felt four times over is the driving force of the story: He must be seen to be believed, shown off to the public. Any emotional narrative is halted in its track when Kong is on a rampage, or fighting some worthy, toothy opponent, because the drive of the story is the awe that both the characters and us viewers feel when seeing the spectacle.

The 1933 original is called a horror movie by the AFI, but as a vector for this embodiment of entertainment, it runs the gamut of emotion: tragedy and triumph, violence and romance, the ancient and exotic climes of Skull Island and the gleaming, familiar newness of New York City emerging from the depression (Keep in mind the Empire State Building was only two years old at the time, and the airplanes were top-of-the-line).

This last point finally brings us to Jordan Vogt-Roberts’ joyous, campy, big-budget Kong: Skull Island, one of the few attempts to alter Kong’s story since his creation. The movie’s setting, in the valley between the peaks of Vietnam and Watergate, with a heavy military presence in the cast, is used to contrast the wider world with the ancient, lost one where the film spends nearly its entire runtime. The great ape and all his countrybeasts are recast as a cleansing escape from the uncomfortable realities of the modern world.

The nature of this escape is telling: the effects of Skull Island are at once primal and progressive. Soldiers on opposite sides of the war become friends, grunts and scientists reconcile their mutual distrust, and men and women of many colors and nations band together, all under a mixture of fear and appreciation for the wild, ancient world they’re stuck in. That world isn’t just natural, by the way: On this Skull Island, the usual prehistoria is combined with elements from both World Wars, Imperial Japan, wartime Korea, a host of fiction from Joseph Conrad to John Wayne, and even cave paintings.

Back to the real world, though, for the summer of ‘73. That year was a turning point for entertainment: TV shows like All In The Family and Sanford And Son were bringing serious looks at non-traditional households into tens of millions of very traditional households. The British Invasion of the sixties was giving way to challenging genres like metal and punk. And the young generation of “New Hollywood”, the first generation of filmmakers who had lived all their lives immersed in cinema culture, started to move from provocative, morally grey stories into more generalized, friendly entertainment, creating the phenomenon that we still call the big-budget blockbuster.

Like most successful art movements, these new kind of movies gave the public something they didn’t know they wanted. Lucas, Spielberg, Coppola, and dozens of other filmmakers were working on projects that everyone could enjoy, based on artistic influences both familiar and novel to audiences. The biggest movies of the seventies drew on everything from the Imperial Japanese historical films of Akira Kurosawa, to contemporary films about the World Wars, to… you can see where I’m going with this, I’m sure.

Vogt-Roberts renders the newly-discovered yet ancient Skull Island as a dangerous vision of the slew of influences on film at the time it was being made. The characters we follow, charismatic and easily recognizable but bereft of any change or growth, aren’t the heroes. They’re just here to watch and gape at what happens when it all comes together: a ten-story monster, rendered in almost fractal detail, somehow a superhero and a very human figure and a simple animal all at the same time, working on all the myriad levels the greatest and most popular movies do.

As he smashes rocks and helicopters one minute and gazes mournfully at his reflection in a lake the next, it’s clear: This Kong, in every sense of the word, is a blockbuster.

Does It Look Like It’s Our First Time? Revisiting FROM... Previous
The Bus Stops Here: TRASH TIME Takes on Silent Hill Next

A story of big movies, bigger creatures, and untamed entertainment.