MISSION: IMPOSSIBLE and the Value of Vulnerability

"I'll die unless you kill me!" 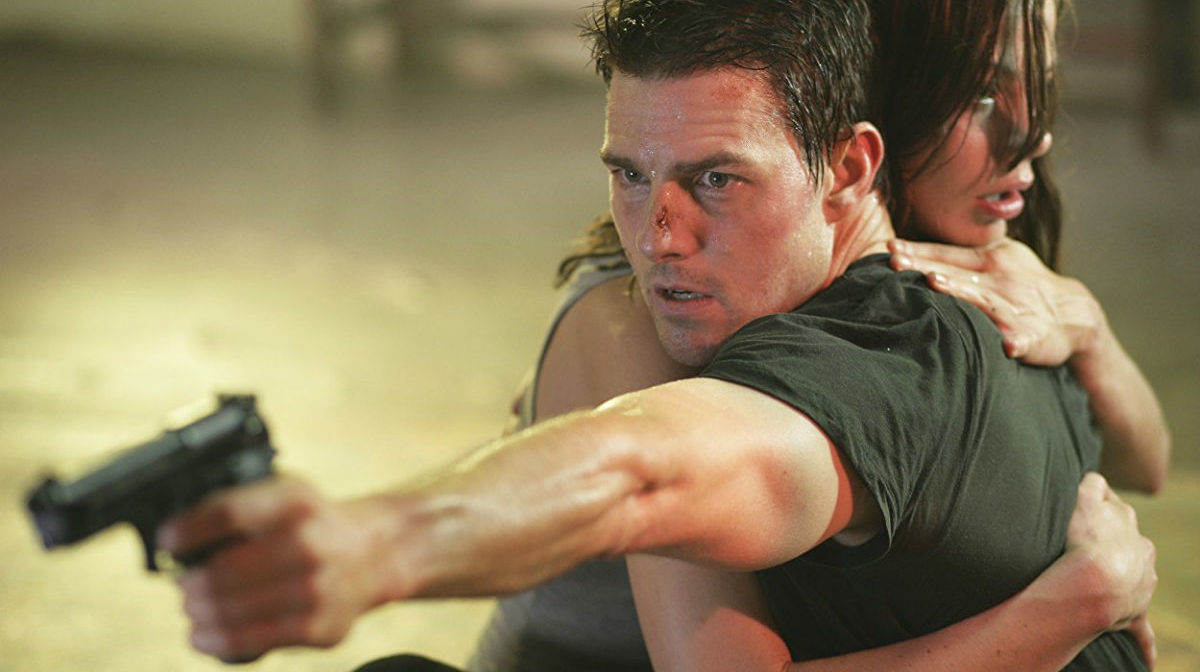 In this era of mega-franchises, Mission: Impossible occupies a peculiar place. A relic of a time when movies could rely on raw star power and fairly plain plotting to deliver a satisfactory experience, the series has managed to stay afloat in a landscape used to the politically charged commentary of the Bourne trilogy and the sophisticated world-building of the Marvel Cinematic Universe. How exactly? Well, let’s start at the beginning.

First movies in a franchise are usually the ones that set the bar and determine the blueprint to follow for the next installments. But in the context of the M:i series, Brian De Palma’s freshman entry is a completely different species from the rest. It’s a relatively small-scale, old-fashioned thriller relying more on sheer espionage paranoia than the extravagant set pieces M:i is known for today. A big part of that is the portrayal of its protagonist: Ethan Hunt.

Even though Hunt is brought to life by the larger than life screen-presence of Tom Cruise, he doesn’t exactly play the character like a traditional action hero. Hunt is smart and resourceful, but also a guy with some pretty serious anxiety issues. He behaves like a dorky pencil-pusher who suddenly became an elite agent and is still working in the transition. This is shown most prominently in the iconic scene where Hunt infiltrates an hyper-protected CIA vault to steal a list of undercover operatives. The odds are so against him that even a drop of sweat from his face could result in his mission’s failure. Hunt is reacting like most people would in this type of situation: terrified and awkward.

It’s important to note that Hunt’s abilities are mostly limited to staying alive with the elements provided by his surroundings. Mission: Impossible isn’t overly concerned with action, and it’s all the better for it. It focuses on Hunt’s strategic savviness rather than his physicality, and like that, it gives the audience a clear sense of vulnerability around him.

To highlight what works, sometimes it serves to mention what doesn’t, and yes, that means bringing up the unfortunate M:i II. Ethan Hunt in his first sequel is a fundamentally different character from the version in Mission: Impossible. He’s basically Roger Moore’s James Bond without any of the humor or self-awareness. Like other actioners in the early 2000s, M:i II took the wrong lessons from The Matrix, like assuming that black leather is appropriate for all environments, or that slow motion instantly elevates your action craftsmanship. It’s a film so convinced of its own awesomeness that it overlooks what worked the first time around in a spectacular fashion. Hunt’s endearing clumsiness in Mission: Impossible is replaced by an overconfident and pretty much invincible alpha male stereotype.

Fortunately, M:i II is so detached from the rest of the series that it’s fairly easy to consider as some weird fever dream. And now we can get to the part where things get especially interesting…

M:i as we know it today in terms of style, tone, craftsmanship and character approach was built in M:i III. Fresh from Alias, J.J. Abrams took one of the elements that made his spy drama compelling and incorporated it into the M:i series to great effect, i.e., taking a look at what secret agents do when they’re not saving the world. M:i III established Hunt as a family guy first and a super-robber second, which set the character and thematic dynamics for the rest of the movie. Hunt now has a “normal” life with his romantic partner Julia, taking the everyman element from Mission: Impossible to the next level. The vulnerability was not just in his character, but in the people he cares about and the world where he operates.

Hunt’s personal and professional lives intersected in ways that gave him prominent emotional scars, since some of the IMF members became his family. The death of Lindsey Ferris (his protégé and surrogate sister) during a mission kickstarted his journey into questioning the nature of his job and the lines that should be drawn in it. And master hacker Luther Stickell serves as a voice of reason for his recklessness. This is brilliantly displayed in the Vatican infiltration sequence, where Hunt and Stickell talk about the former’s ethics with the same normalcy as if they were in a coffee shop.

Providing a detailed portrayal of Hunt’s routine outside of IMF made the threats he has to face feel more dangerous and urgent. He finally had something important to lose beyond the possession of a MacGuffin. Abrams drives that point home by never explaining what’s the Rabbit’s Foot, the object Hunt has to obtain to save Julia from weapons trafficker Owen Davian. Speaking of which…

Philip Seymour Hoffman’s powerhouse performance as Davian is a good part of M:i:III’s magic. In the same vein as other great villains, like Maleficent or Darkseid, Davian’s motivation is evil for evil’s sake. There’s no backstory or nuance to his actions. He just wants to mess with people because he likes it, which makes him an ideal scumbag for the audience to fear and hate. And Hoffman’s intimidating screen presence serves as a perfect contrast to the nervous and earnest Hunt. Davian is not necessarily more skilled, but he knows how to push Hunt’s buttons and bring him down to his knees in the blink of an eye.

By showing Hunt’s personal life getting threatened by his IMF activities, M:i:III asked “is it possible for him to achieve a balance between the two?” The movie leaves that question in an ambiguous note, but the full answer would come in next entry…

Mission: Impossible – Ghost Protocol was a return to form for M:i in the sense that it’s more centered on the teamwork the original show was built on. Ethan Hunt is still very much the core of the film, but his IMF mates get more detailed writing. That is the especially the case for Jeremy Renner’s William Brandt, a government agent struggling with the guilt of (apparently) failing to protect Julia from a terrorist attack.  Brandt is a skilled field operative that was traumatized during a mission, which made him chase a boring, but safe line of work. The events in the film are a way for him to face his demons again and get back to do what he does best. All in good part thanks to the support of Hunt, who can sympathize with the experience of losing innocent lives under your watch. Although this subplot is tackled, for the most part, in exposition form, Cruise and Renner’s chemistry make it the heart of the movie; and it ultimately provides the answer to the aforementioned question left by M:i:III.

No, it isn’t quite possible for Hunt to have his cake and eat it too. His thirst for recklessness places the people he cares about in danger, so the best he can do is to keep his distance from Julia and observe her from the shadows.

Hunt in Ghost Protocol is still driven by his anxiety, but Cruise’s performance is also of a man that has come to terms with his rather accelerated and risky way of life. Cruise’s melancholic facial expressions convey the fact that Hunt is still grieving the idea of never interacting with his wife again; all while his body moves with the military confidence of a man willing to do what it takes to save the day.

When longtime Tom Cruise collaborator Christopher McQuarrie entered the M:i series with Mission: Impossible – Rogue Nation, he preferred to tackle Hunt’s vulnerability (or lack thereof) with his tongue planted in his cheek.

Even though the film has a few scenes where Hunt’s life is on the line, it essentially points out the elephant in the room throughout the franchise: “all things considered, the guy is doing pretty okay”. McQuarrie straight-up transforms Hunt into an indestructible rag doll, which makes for a fun commentary on the series’ absurdity, but also deprives it from the weight the previous movies brought. This version of Hunt is basically the one from M:i-2, but without the pretense of being a super cool badass. Cruise is in on the joke, and builds on that interpretation by bringing the goofball beefcake persona he projected in the McQuarrie-written Edge of Tomorrow.

While we’re at Rogue Nation, it’s worth mentioning Rebecca Ferguson’s Ilsa Faust, who symbolizes some of the movie’s strengths and flaws. Female characters in M:i are usually defined by Hunt’s agency, so the potential of Faust having a subplot of her own is a rather refreshing one. Not to mention tackling the theme of independence and working to get out of the shadows. Ferguson makes the proceedings interesting enough, even though the movie doesn’t fully develop the aforementioned ideas. That is because it’s more interested in shooting Faust as some sort of enigma for Hunt (and by extension, the audience) to figure out, keeping her at arm’s length. Consequently, Faust never quite fulfills her potential in terms of dramatic stakes, and this applies to Rogue Nation as a whole too.

M:i is a triumph in the execution of simple material. Thanks to Tom Cruise’s keen understanding of what makes an action protagonist work, Ethan Hunt succeeds as a character you can feel worried about, consequently enriching the set pieces he carries. He’s a man who knows no limits to accomplish his missions, regardless of the toll it takes on his health. And Cruise’s own commitment to do the same for the sake of our entertainment is certainly something to be appreciated.