Recommendation: Welcome To The Basement 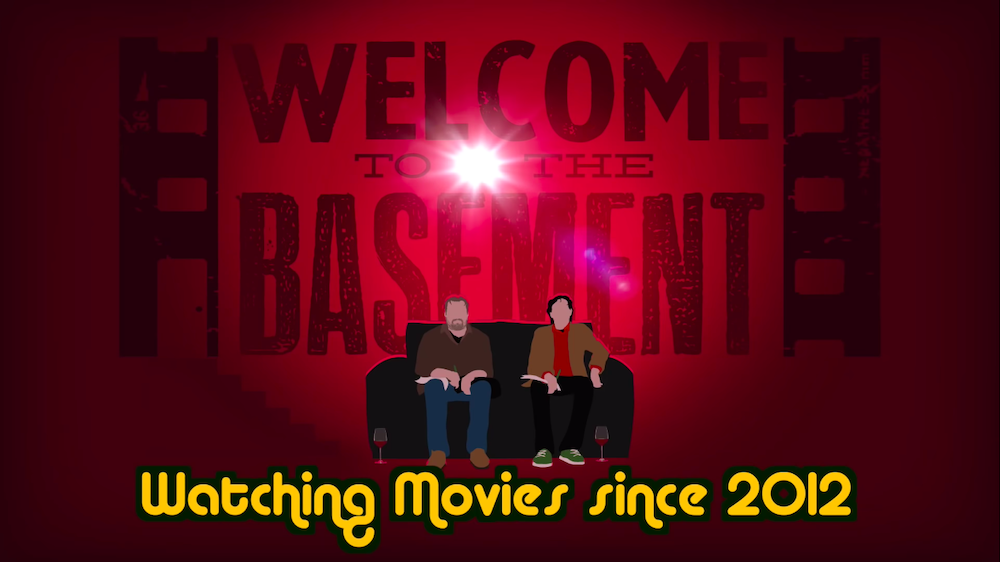 It’s an uncomfortable, anxious time. Many of us are staying home and self-isolating from others, for the greater good. But, this can be mentally taxing. We have to stay connected to our family and friends, and many of us also seek something to watch, to help the days go by.

In light of this need for both time-filling entertainment and virtual socializing, I’m pleased to recommend the movie-discussion YouTube series Welcome to the Basement, which I have been watching and re-watching since it began. Covering a variety of movies every two weeks since 2012, and synthesizing the feeling of hanging out with a couple of good friends, it is worth your consideration. It gives me that familiar, comfortable feeling, making solitude in my bedroom a little less lonesome.

Beginning as ‘a year long journey into cinema,’ this show was a New Year’s resolution for Matt Sloan, an improv comedian and old school YouTube creator of Blame Society Productions (the channel behind the hit web series Chad Vader back in the day, as well as the contemporary and similarly-long running Beer & Board Games, which I also watch, and re-watch.) It was created to finally cross movies off of Matt’s to-watch list, with the added twist that his co-host, Craig Johnson, doesn’t know what movie it’s going to be until it is pulled out of an envelope. As the intro says: “it might be good, it might be bad. We’ll watch it, and talk about it.”

Welcome to the Basement premiered during my freshman year of film school, and it played a huge part in broadening my cinematic horizons as well as sharpening my ability to think about film. It has grown into easily my favorite show on YouTube, replete with running gags, themed months, gift-giving, Halloween episode costumes (based on characters from earlier movies from that season,) its very own Hall of Fame (adding new inductees in every end-of-the-year special,) and all sorts of cinematic (and musical) discussions. Longtime friends Matt and Craig offer a different flavor of movie discussion than most nerds on YouTube. They both have backgrounds in theatre and improv, as well as shared love of literature and music, all of which informs the humor and tone of the show.

It’s got somewhat of a Mystery Science Theater 3000 vibe. Certainly in influence, of course: comedy guys in the Midwest riffing on movies. More than just that: Matt and Craig (as well as some other BlameSociety players) have, in fact, contributed their talents to RiffTrax in the past.1 I never got into MST3K as a kid, so I didn’t get into it as a teen, or as a young adult. If that’s the case for you: worry not. Welcome to the Basement has its own distinct formula: After presenting each episode’s movie, talking a little about the filmmakers involved, some history and background, as well as any personal history with the picture from either of them, Matt invites us to join them over on the old leather couch. There, they watch the movie for the first time, so the jokes are improvised, rather than written in advance. Usually to make each other laugh.

The viewing isn’t shown in full — episodes average about 22-25 minutes in length. Clips of the screening are interspersed alongside head-on shots of Matt and Craig summarizing the plot points of the film afterward, which together cover the subject in about ten minutes. They go back to the chairs from the intro to discuss the film for a few more minutes, and then transition into other segments before wrapping up the episode. Rounding out the roster are director of photography and Matt’s wife, Tona Williams, as well as their cute cats, who are often featured and occasionally do cat things in the frame.

This year marked the 9th season of the show, so there are plenty of episodes to watch: It started out as a monthly affair, but not long into its first season did it find its footing and start coming out “every other Friday,” as one fan-solicited celebrity cameo reminds you. Beyond the movie of the fortnight, Matt and Craig will discuss other films that they’ve already seen in the comment-generated segment SEEN IT!, which started as simply saying “seen it,” but evolved into a vehicle for discussing any movie the viewers can throw at them.

Viewers can also throw postcards, records, and other gifts at them via a P.O. Box (I’ve even sent a few things their way over the years) and in 2016 they started a satellite program called Unboxing, which airs every other week between regular episodes. They not only delve into their mail crate and thank donors (the show is viewer-supported via a PayPal donation button) they also include deleted bits from the viewing of the previous week’s film, show fan art, and talk about all sorts of subjects. Matt has shared old blog posts from his now-defunct Myspace page, reviewed records that fans have sent him (he’s got a large vinyl collection, and at a certain point in the show it becomes tradition to put an LP in the background of Craig’s shot that has a thematic link to the movie,) and talked about movies from supplemental, off-camera New Year’s resolutions such as watching all the Zatoichi sequels, other films in a 12-film DVD pack from Hard Ticket to Hawaii director Andy Sidaris, or the films of John Ford.

So, where should you begin? Well, I’m inclined to recommend the very beginning. BlameSociety has playlists for each season as well as one for Unboxing, but I am also going to link this one compiled by fan Steven Heron, that includes everything in chronological order, including extra bits (like a followup video to the Lost Highway episode where Matt has more thoughts, which is also in the official Season 1 playlist), and it includes Unboxing between episodes once that starts, as well as the handful of videos Matt made where he shows and discusses his process of editing the show (which are nonessential viewing, except for editing geeks or anyone curious.) For an all-in-one playlist, this is the primary option.

But, these are by no means the only ways to watch the show. You could just watch episodes randomly, and barring some inside jokes or callbacks, or Season 1’s differing visual format, it’ll all run together coherently. Pick a movie they’ve watched that you love, to see if they like it too, or what they find out about it. Or pick a movie you’d never want to see, and watch them subjected to it so you don’t have to be. A title you’ve only ever heard, or one you didn’t know existed. Whether the movie is appetizing or unappealing, their episode on it is worth watching, so what I would recommend is not skipping an episode because you know it’s a bad movie. The show is a comedy show, and they make it fun. One of the core concepts of the show is, as Matt puts it: “Every movie is worthy of serious discussion — even the bad ones — and every movie is riffable.”

However, if you see an episode whose movie you want to watch unspoiled2, by all means check the movie out before checking out that episode; if you follow their Facebook page, you’ll find that they post what the next movie is ahead of time, so you can get caught up before it airs. I myself skipped the Splice episode for a while because I’d wanted to see that movie (but eventually I realized I wasn’t going to make time for it and didn’t care that much about finding out what happens.)

As I said earlier, they watch every kind of movie: from classic classics like The Adventures of Robin Hood to cult classics like The Adventures of Buckaroo Banzai Across the 8th Dimension. From great movies like Akira Kurosawa’sDreams to vapid pablum like Mac and Me. Venturing The Valley of Gwangi to the Valley of the Dolls, trying everything from Paprika to Soylent Green. From Eyes Without a Face to Tough Guys Don’t Dance, from Top Gun to Mega Force, down from The Descent up to The Holy Mountain, from Jean-Luc Godard’s Weekend to Valerie and Her Week of Wonders.

It’s eclectic to say the least.

A good introductory ‘get the feel of it’ episode, I think, would be Beyond the Valley of the Dolls. It shows off their strong variety of jokes, it proves the rule that all movies warrant thoughtful discussion, and if you want to see what they thought of Valley of the Dolls, which they both hadn’t seen at that point and themselves wonder, its episode is already available and you can watch it right afterwards.

The more I think about it, Welcome to the Basement is to me as an adult not unlike what The Simpsons was to me as an adolescent: I rewatch it constantly, I like to quote it, and it’s a pop culture gumbo — a melting pot of comedic, cinematic, literary, historic, musical, and other cultural influences that provides me with all sorts of different knowledge and reference points that I wouldn’t normally be exposed to on my own. I’ve purchased at least six movies because of either an episode or their mention during Seen It!, including the wonderful weirdo Japanese horror movie Hausu.

So give it a look. If you find that it’s your jam, suits your style, or is a ‘cool scene, jellybean’ then I have done my part. It’s got a small but dedicated viewership, and I really think more people, especially film buffs, cinephiles, and general fans of motion pictures should give it a shot.

David Hoh is a video editor in the Twin Cities. He made YouTube videos and short films in high school, then studied filmmaking at Minneapolis Community Technical College, earning two associates degrees in directing and screenwriting. He has yet to make a film since.