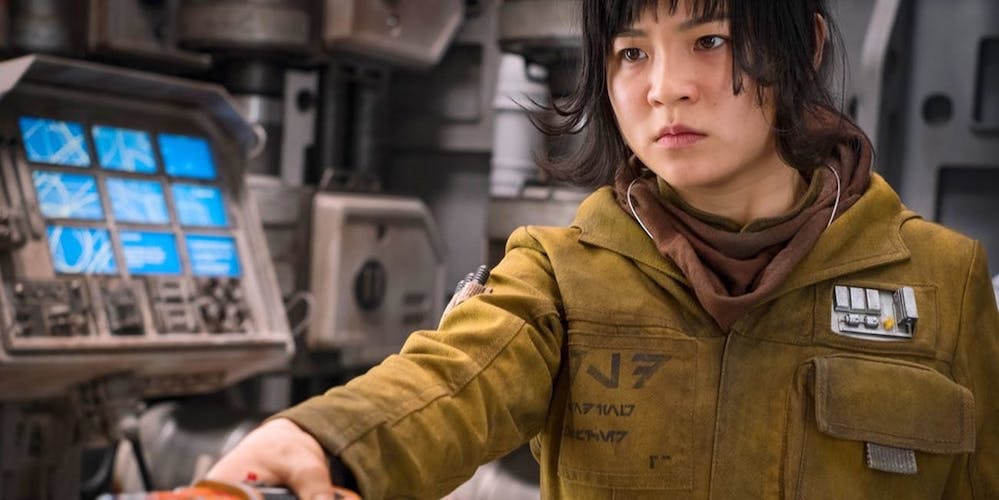 Star Wars: The Rise of Skywalker is the third movie in the new trilogy of Star Wars movies, but you wouldn’t know it because, instead of continuing the story laid out by its predecessor, The Last Jedi, writers JJ Abrams and Chris Terrio decided to change course. They did this in a variety of ways, like undoing the fact that Rey descended from regular, average people, and bringing back Kylo Ren’s helmet, which he had smashed in The Last Jedi to refute the idea that he was only chasing the ghost of Vader rather than becoming his own man. Another change was more egregious; they sidelined Rose Tico (Kelly Marie Tran), the brave engineer that Rian Johnson introduced in The Last Jedi. Doing so not only undermined the ethos of Star Wars and the story the trilogy set to tell, it also neglected to fulfill the promise of a more inclusive, representative galaxy.

Out of a movie that is more than 2 hours and 20 minutes long, Rose gets about 1 minute and 16 seconds of screen time. Slate noted that she appeared in a little less than 11 minutes of The Last Jedi’s runtime, which is less than I thought (obviously, still more than The Rise of Skywalker). However, I propose that it’s not just about how much time a person is in a movie but also the significance of that person’s role. In her approximate 11 minutes of time in The Last Jedi, Rose drives the story by taking action, she tells Finn that he needs to fight for things they love, and she is empathetic when she sees injustice at Canto Bight. What does she do in her extremely limited time in The Rise of Skywalker? Not that.

Instead of joining Finn, Rey, and Poe on their adventures during The Rise of Skywalker and developing her friendships with them, Rose stays at the Resistance base and does barely anything of consequence. This sidelining is unfortunate, not only because it diverts her and Finn’s burgeoning relationship hinted at the end of The Last Jedi and basically isolates The Rise of Skywalker from the rest of the series, but also because it removes the trilogy’s only primary Asian character and undercuts the inclusivity and progressiveness that the new trilogy was supposed to promote.

Terrio said that Tran’s scenes were mostly with Carrie Fisher, who died in 2016, and that in the end, the unused footage needed to splice the two into a scene together in present time was not adequate. I don’t know whether or not there’s any truth to the idea that Rose was sidelined because Lucasfilm caved to the aggressive, racist, and misogynist fan reaction to her character in The Last Jedi. But Terrio’s explanation shows one thing we do know: Rose was sidelined from the start, because cobbling together unused footage, CGI movie magic, and body doubles to create the illusion that Carrie Fisher is still with us on this earthly plane means that Rose was never supposed to be with Finn, Rey, and Poe in the first place. Otherwise, we would have gotten those scenes. We don’t need to buy into internet rumors to see that Terrio and Abrams did not intend to include Rose in the main story and as a result, she has no place in this movie. It seems there were no rewrites and reshoots, even though these are common to large productions. It seems that there were no attempts to add scenes. It seems that no one tried.

The Rise of Skywalker was supposed to continue and conclude her story alongside everyone else. Without this arc, she recedes to the background and doesn’t get to help the Resistance nor to support her friends. It hurts the story reserved for Finn, Poe, and Rey as well, because they never think about Rose again. Removing Rose makes everyone the antithesis of who they are supposed to be, loyal and kind, and it undercuts the movie’s attempt at a message, that the Resistance wins when its people stick together. The movie separates the team and diminishes the arc we should have gotten for Rose and the other characters who would be listening to her. Instead, she has about 12 minutes of story across more than 5 hours and no more.

Recently, Jon M. Chu, who directed Crazy Rich Asians, called for a Rose Tico television show on Disney+ to give her the time she deserves.

Respectfully to Chu, the damage is done. Sure, Rose might get her due but there would not be a good way to do this without the supposedly important people in her life, like Finn. There would be little likelihood of getting John Boyega so that the show could at least address the important friendship, or even romance, on a series. Starting fresh may give her depth, but it won’t undo the harm. Anything at this point would seem like pandering. The simple request from fans wasn’t that she be considered more important than the other characters, it was that she be treated as an important part of the story. Rian Johnson did that in less than 11 minutes. Abrams and Terrio should have been able to do the same.

The choice to remove Rose from the story stings because it isn’t just about removing one Asian character; it’s that she was the only Asian character we had. It shows that when there’s basically only “one of each” then a series isn’t really diverse. All around us there are examples of science fiction showing diversity in rich ways. The Expanse, which just returned for a fourth season on Amazon Prime, is one example. The core and recurring cast of this show about intergalactic conflict and warring factions is comprised of Black men and women, other people of color, and numerous women characters in leadership roles, alongside the white characters, not a mere handful of diversity. I notice Asian faces throughout the series. They play scientists, fighters, refugees, heroes, villains, and leaders. There isn’t just one of each ethnicity on display, either.

Or take another example straight out of Star Wars. The Mandalorian, which just finished its first season, stars Pedro Pascal, a Chilean American man. Though the Mandalorian himself abides by a creed that means he never removes his helmet, the audience generally knows who is under there (a combination of Pascal and Brendan Wayne and Lateef Crowder, who are his doubles and on-set collaborators) and of course, who is supplying the Mandalorian’s laconic voice. Most importantly, Pascal’s role could have easily gone to other actors and we can’t forget that every time people of color get roles that there weren’t dozens of white actors getting attention as well. During the panel for The Mandalorian at Star Wars Celebration in April 2019, Pascal joked that when he met with Jon Favreau and Dave Filoni to discuss the show, he asked whether they wanted him to audition for the bug or the robot. In the Star Wars universe a lot of people of color do end up getting cast as bugs or robots, something that should be treated as the floor and not the ceiling.

Star Wars stories are critical not just because they have captured the attention of several generations. They are one of the most important science fiction series we have in cinema. As the series evolves and hopefully, become more progressive in its representation, casting choices matter and will contribute meaningfully to the story. If we can show a future in which different races and ethnicities have colonized the stars then we should do our very best to show that these characters have depth as well. It’s disappointing that in the concluding chapter of a new trilogy that had such promise, it just didn’t stick the landing.

Allen’s Top 10 films of 2019 Previous
The Podcast LIVES! A Decade in Review! WITNESS! Next