I Was A Teenage Spacefaring Culture! 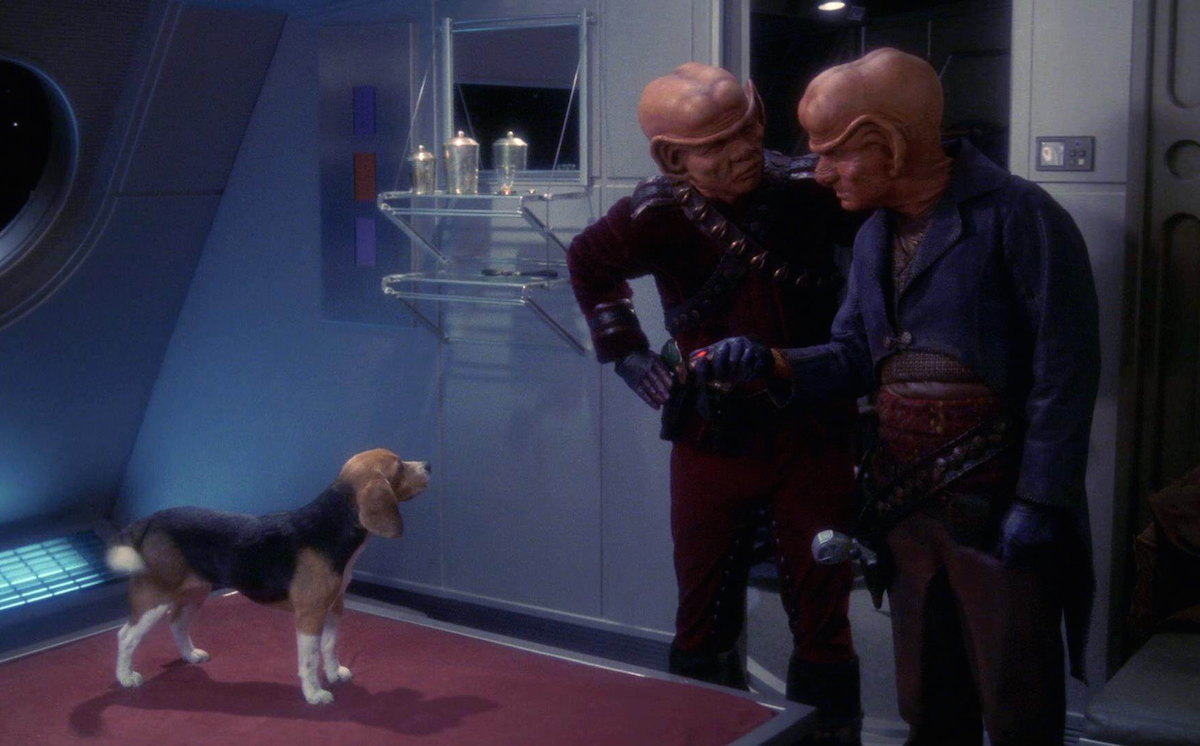 Being a Star Trek fan is about walking that fine line between appreciation and honest appraisal. Only staunch adherents will be able to look you full in the face and tell you the whole is without blemish, be it in tone, pacing, effects, “treknobabble”, or that often misunderstood term “cheese”. And these are typically folks for whom the appreciation of a thing becomes far too personal to allow for negative appraisal. Think: Batman fans. Frankly, I think you’d have to be crazy to even posit that a show with 20+ episodes per season isn’t going to toss out some ripe garbage from time to time. And the old chestnut of “It get’s really good after x episodes” is just the way we live now. No show starts fully formed. But what this piece presupposes is; Maybe Enterprise is good?

I say all of this to illustrate exactly why I, a lover of all things Trek, was so hesitant to really dive in and give Enterprise a shot. I’m an original series and Next Generation loyalist who has only waded toe-deep into the Deep Space 9 waters, and I was immediately skeptical of CBS’ resurrection-minded prequel series, set 100 years before James Tiberius Kirk ever set foot on the bridge of the flagship of the Federation. After all, don’t I have much better and more ‘deserving’ Trek to get to first? Turns out, I was holding onto that preciousness that can sometimes make us Trek fans unbearable. How snobbily Vulcan of me. A few things (like the atrociously bad opening credits song) aside, the tenacity and originality of this show pulled me in, and now simply will not let me go.

Surprisingly, Enterprise functions as a great jumping-on point for folks that might have limited tolerance for the ‘dated’ or ‘cheesy’ nature of TOS, the ‘dryness’ of TNG, or the moral greyness and interconnectivity of DS9. Nobody should ever start with Voyager, so please don’t recommend it to your less Trek-savvy friends. This is not to say that Enterprise isn’t just as talky or occasionally plodding as any of those series. If you’re looking for that, hit up JJ Abrams. He got you, boo. This is more of a modern take on the morality plays and meditations on utopian ideals so famously laid out in previous series installments, but divorced from the daunting totality of canon so often loved and lampooned. What’s interesting is that in removing the show from a point in history where Earth is pretty well established in the cosmic community, there’s a freedom to explore how we earned our place in the galaxy. When the show begins, we are nearing 100 years of a solid, but constrictive alliance with the Vulcans. We resent their arrogant proclamations that we are too immature to press forward into the cosmos, and they in turn view us as willful, ungrateful progeny to be shepherded with patient withholding. Oh, the daddy issues you’ll find. Not to be restrained, humanity presses forward in our mission of exploration. Circumstances place our Captain Archer in a charged command relationship with his dear friend and Chief Engineer, and his Science Officer, the first Vulcan ever to serve with a human crew. Quickly, our maiden trek is at the center of not only a ripe and enigmatic cosmo-political landscape, but also a temporal cold-war with factions from the 31st century who are suspiciously scrutinous of this delicate time in our development. This sounds like a dumb way to have and eat cake, but so far the execution has had the precise right balance of intrigue and reveal, coloring all known players accordingly and with an interesting amount of pathos. Even the villains are victims of a sort, both seduced and scorned by those factions pulling the strings. I’m rounding the end of season two, and the parallels drawn between our current geopolitical landscape and that of the 22nd century have made for some downright poignant episodes. And watching this young crew forge ahead into the galaxy without the benefit of a Prime Directive, having to make hard decisions and face harsh and chilling consequences as they try to leave each planet better than they found it makes for a gripping story dynamic.

The dynamic of the central triumvirate is enhanced by the natural distrust and quasi-enmity between our two central species, and the scenes where Trip and Archer are all but baiting T’Pol into confrontation early on lend a different dimension to the old Kumbaya vibe of previous shows. But it works because you know that these characters are at odds because they want to prove themselves capable and trustworthy. Manufactured drama stemming from betrayals and intrigue are replaced by a ‘will-they/won’t-they’ element focused on moving past prejudice and into true camaraderie. Outside of the freedom this setting gives the show story-wise, I was pleasantly surprised to see that the show plays freely with a lot of genre trappings. One scene from the pilot episode drops us into an in media res found footage zombie movie from the perspective of an invading force. Another ramps up the fish out water comedy of Trip bashfully resisting the advances of Dr. Phlox’ second of three wives. Also, there’s an episode where people are cocooned by a gooey tube creature, and there’s more Jeffrey Combs in prosthetic makeup than I even know what to do with. His recurring Andorian’s reluctant bromance with Captain Archer is so much fun. You don’t usually get this kind of freedom from a prequel, and I think it’s admirable. The cast is game, even if like Ensign Hoshi, they aren’t sure space is for them. Or, like Porthos, they are a dog. Or, like Malcolm, they’re kind of a dick. Or, like Trip, they are impregnated under zany circumstances. Or, like Ensign Mayweather, they appear forgotten for several episodes at a time. Come on Star Trek! The one black guy!

Enterprise is sort of an encapsulation of all of the things good and bad that make Trek a religion. It’s optimistic. It’s rollicking and fun. It’s episodically rooted in character and theme over serialization and weighty, season-long arcs. It’s got a great central cast triumvirate. It’s about what it means to be human, and to prize the pursuit of understanding and unity over the enshrinement of ego and ‘rugged individualism’. It’s also talky. The design harkens back to that classic Trek vibe, but everything is more workmanlike. More 70s NASA. The crew aren’t nearly the icons of previous Treks, but watching them do their level best each episode to make a better world, even when they are likely to be killed doing it is a joy, and it’s warmed the cockles of this old Trekker’s heart.

Guys. There is also a dog on this show.

The Bus Stops Here, Episode 4: Dystopian Cinema Previous
Review: I DON’T FEEL AT HOME IN THIS WORLD ANYMORE Next