Stream of Consciousness: The Apex PREDATOR of Beefcake Cinema

If It Streams, We Can Watch It 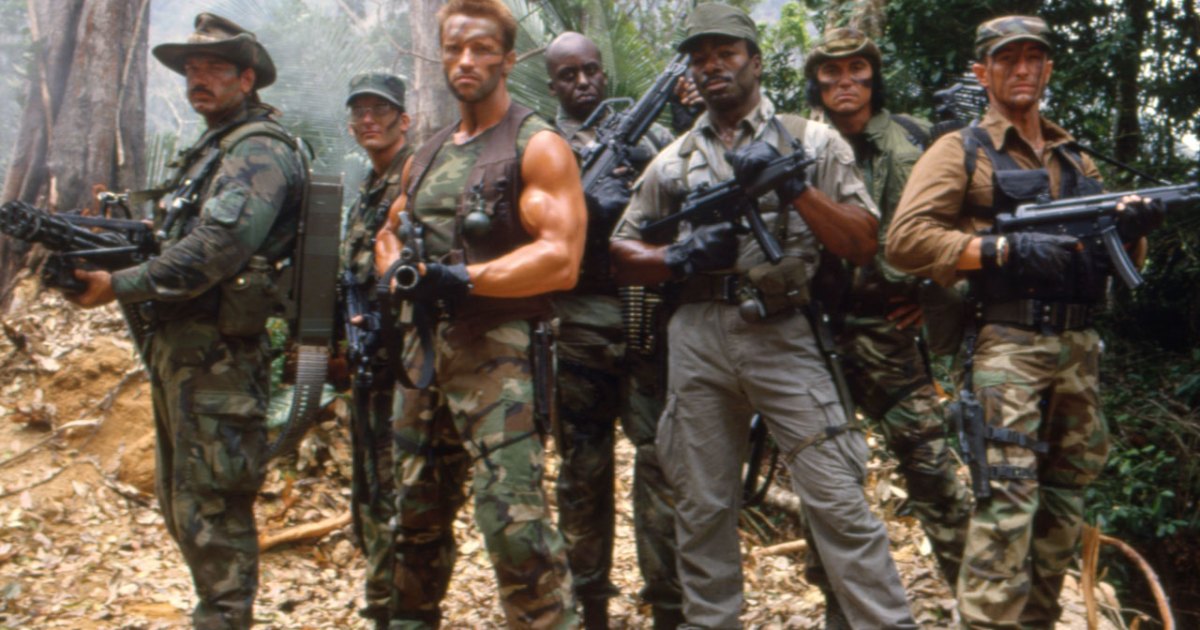 Arnold Schwarzenegger is my favorite actor of all time by a pretty wide margin. He’s an actor who is almost always entertaining and giving his all. An endless factory of charisma and humor. Hell, before I started writing for Lewton Bus I spent an entire month watching and profusely writing about my love of Arnold movies for a personal blog that turned into this very Stream of Consciousness series.1 And with The Predator arriving this weekend, along with a ton of classic Fox films currently on HBO, it feels a perfect time to talk about what might be the ultimate “Arnold Movie” — Predator.

The thing about Predator is that, on its own, it’s already one of the best action films of the 80’s and of Schwarzenegger’s entire career. It was a coming out party for director John McTiernan, the first of what might be the best three film run in cinema history (alongside Die Hard and peak Dad Movie The Hunt for Red October). It features creature effects by the late Stan Winston, probably the greatest effects artist of all time. Punched up by 80s and 90s screenwriter extraordinaire Shane Black, the script is filled to the brim with memorable and immensely quotable hypermasculine dialogue that is delivered gamely by a pitch-perfect cast.

And oh what a cast that is. In addition to starring Schwarzenegger at the absolute pinnacle of his superstardom, Predator is exploding at the seams like a tight polo on a bodybuilder with some of the most iconic beefcakes of the era of muscle-clad superstars. You’ve got Apollo Creed himself, Carl Weathers. You’ve got former WWF wrestler Jesse “The Body” Ventura. There’s imposing-looking action-movie “that guy” Bill Duke. Oh, and former college football player, pornstar, and stuntman Sonny Landham. There’s more beef on display here than in the entire state of Texas. Hell, they probably only let Shane Black act in the film to make the main cast look even bigger.

But the overwhelming mounds of muscle on display aren’t just for masculine fantasy or feminine lust. Thematically, Predator is all about deconstructing the action movies of the day. By the mid 80s, action films had become violent male-dominated power fantasies involving dudes who could shoulder press a bus. Often many of these films would have a sci-fi or fantasy bent, attempting to cash in on both the Reagan-era need for “men to be men” as well as the massive box office numbers of films like Star Wars. And in order for this deconstruction to work, it needed to first be a perfect example of the genre it was dissecting.

Schwarzenegger himself was Hollywood’s biggest star of this era specifically because he threw himself into these types of films. The Terminator, Commando, Conan the Barbarian… all of his big hits going into the late 80s were exactly the types of films that Predator was seeking to subvert. His casting in the lead role is downright necessary, or at least Schwarzenegger makes the performance as Dutch feel essential. His very undeniable star presence lures the audience into a false sense of security. They expect Commando, but with a more expansive muscle-bound ensemble.

Instead, the film introduces us to the ultimate trophy hunter. The Predator, an invisible, heat-seeking, unstoppable killing machine, is the special ops team’s match. His first kill, eliminating Black’s radio operator Hawkins, doesn’t give the audience much pause — he’s the small, scrawny jokester. The perfect cannon fodder to set up the film’s stakes without actually putting the heroes of the film in jeopardy.

But then the cast start getting picked off, one by one. First “The Body,” then Duke, then Apollo… Until eventually it is only Schwarzenegger’s Dutch left. Even still, this isn’t that subversive — turning the film’s climax into a mano-a-mano battle of the buff is a pretty common thread even for these films. But rather than the typical guns blazing, one-liner spewing, punch-fest that these films typically depict, McTiernan strips all of that away. Dutch loses his weapons, and instead reverts back to the most primitive instincts of mankind’s survival. He hides, builds traps and weapons, and uses a primal howl to lure in the Predator as his prey.

Schwarzenegger, who previously was known for dressing either half naked in fantasy attire (Conan), slick leather jackets (Terminator) or any outfits that could show off his chiseled torso or colossal biceps is here covered in mud. His musculature is hidden underneath mounds of clay, and the one-on-one, face-to-face match up with the Predator, played by 7’2” actor Kevin Peter Hall2) dwarfs even the 6’2” Schwarzenegger. Our “final fight” visually (and literally) strips away the firepower, brawn, and the power from the biggest moviestar of the era.

While Schwarzenegger still wins the day, McTiernan’s thematic core of the film is clear. He has stripped away everything that makes a traditional beefcake action film. He’s taken the pieces off the board as he sees fit (the more slab-of-meat actors like Weathers, Ventura, and co. never really took off as action superstars) and keeping the ones that fit into his vision of the future, primarily the charisma, comedy, and star power of someone like Schwarzenegger.

McTiernan’s next film, Die Hard, seemingly gets most of the credit when it comes to his dismantling and retooling of the action genre. But for as much as Die Hard wrote the template for action movies of the future, Predator was the definitive take on the action movies of the present. He deconstructed the heroes of the day (weapons of the state, ridiculously ripped beefcakes) in Predator in order to then build the heroes of tomorrow (everyman, quippy, jokey vigilantes) in Die Hard. Over the course of just 13 months, McTiernan was able to release arguably the two definitive action films of the 80s.

Predator might not be the “best” Arnold Schwarzenegger film (for my money that’s still The Terminator), but it is probably the most exemplary of what makes his career as a superstar action man so incredible. He doesn’t get nearly enough credit for his ability to find scripts, or his knack for working with/bringing along some of the best directors in the genres he’s working in. Too often films like Predator get cast aside as being dumb dudely movies for manly men, when quite often they are working tirelessly and intelligently under the veneer of being dumb dudely movies for manly men. Predator is a great movie, and you won’t be disappointed to watch it (or rewatch it) before The Predator hits on friday.