Women in Film: Returning the Gaze in REVENGE and M.F.A.

REVENGE and M.F.A. argue that when you reduce us to our animal selves, it is the oppressed who have learned how to win 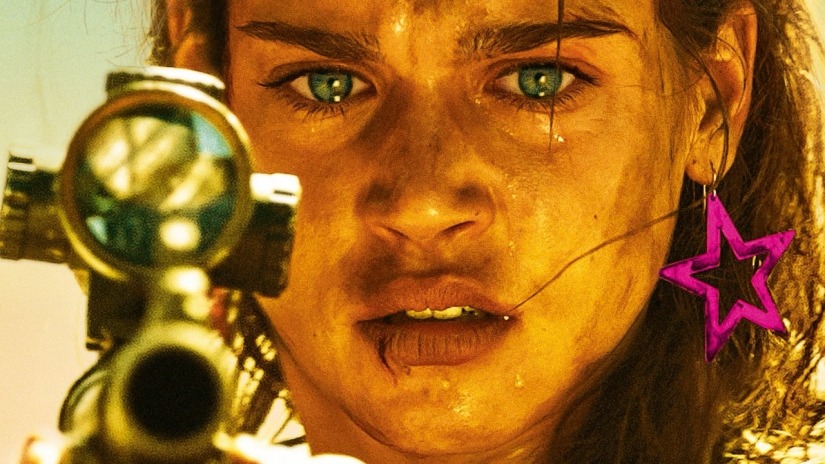 Content Warning: A man discussing portrayals of rape in film. As a survivor of childhood assault I empathize with these films’ anger; I believe that there is value in encouraging people of all genders to listen to what these filmmakers have to tell us.

Coralie Fargeat’s Revenge and Natalie Leite’s M.F.A. are the flag-bearers for a new crop of films that proudly revisit a very dark corner of exploitation, so-called Rape Revenge. Fargeat has stated in interviews that she doesn’t feel the term is altogether appropriate for her film; her intent matters a great deal here, but there’s no arguing that reception to both films generally summon reviled landmarks such as Day of the Woman (aka I Spit On Your Grave), Thriller: A Cruel Picture, Ms. 45, and Last House on the Left. Each of these films centers on a woman who, having suffered awful violence in the first act of the film, exacts ruthless vengeance. I won’t defend the earlier films, this isn’t a winning cause, but I believe that there is great power in reclaiming the trope in the age of #MeToo, violent InCels, and the resurgence of hard right misogyny.

That term, rape revenge, is painful to read, painful to write, worse to speak. Any survivor of sexual assault or abuse responds with recognition and anxiety. The term will always scare away otherwise potentially receptive audiences; folks for whom I Spit On Your Grave is the exemplar aren’t necessarily excited to see more. Revenge and M.F.A. both share some of that awful landmark’s DNA but they are also richly inventive, gorgeously executed endurance tests that cynical horror fans will find surprisingly humanist and empathetic. I’m never going to recommend these films to anyone without sizable appetites for violence and gore (especially in the viciously bloody Revenge), but I also feel strongly that their rage is essential. These are stories told by women for whom the final girl cliche–progressive as it may have seemed at one time–isn’t enough, particularly in slasher films where cynical audiences tend to root for the killers. We’ve had enough aggressively masculine revenge films; give us more of the Bride in Kill Bill, give us more Lee Geum-ja in Lady Vengeance.

Matilda Lutz as Jen in REVENGE

Revenge is a stunningly crafted sun-struck tale of an American woman, Jen (Matilda Lutz), vacationing in a desert oasis with her married boyfriend, a chiseled man with a perfectly square jaw and muscles for days. Friends of his, two leering, oily men, arrive by helicopter at their hidden home. The three men have planned to strike out in dune buggies to hunt whatever game can survive in the endless flat nightmare of Moroccan (perhaps passing for Nevadan) dunes. They pass a night partying. The next day, one of the men rapes Jen while the other looks on. To try to cover up what’s happened, they then try to murder her and leave her for dead in the desert. She of course survives and her vengeance begins.

As with any revenge film, the opening act is painful as we wait for the awful event to play out. Revenge aims high, here, energized by its moral imperative. It builds to her assault with bold shifts of POV. Our vision of her is slobbery and single-minded: its first act is a studied lesson in the male gaze. She is not much of a person to us, just a quiet assembly of parts that drink and dance. She is absolutely meant to excite us, or at least forget for a minute that she’s more than a sexual conquest. The point is to bait any assholes who redirect blame onto the victim, who absolve rapists with “she was asking for it.” The perpetrator of the initial assault, one of the visiting hunters, absolutely flies this flag; the mere presence of her ass is an invitation. Because she dares to present herself as a sexually vital person, she is therefore available to all who witness her. It is when she is attacked that the film begins to give us the woman that she knows, the empath, the victim, the survivor, and the avenging angel.

Revenge is unafraid to present her as an instinctual being once her hunt begins. Survival exposes our rawest needs. She is wordless, a force, a clever and inspired foe. She is stronger than her enemy because she has seen who they are. These men are blunt, stupid weapons. All they understand is hitting and fucking. This film argues that when you reduce us to our animal selves, it is the oppressed who have learned how to win. It’s no coincidence that she spends much of the film watching her targets through a sniper rifle’s viewfinder. She returns their gaze, with intent to kill rather than fuck. Well, in these films fucking and killing aren’t much different; they are both assertions of power. When she gains the upper hand, her gaze is lethal.

If the marketing for Revenge is accurate, there are men who have seen this film who apparently don’t then recognize that her body isn’t the whole of her personhood, that believe that her sex is all she is, that scenes of her suffering are crocodile tears, that her protests are irrelevant, that her survival and vengeance are somehow unrealistic even in context of a fictional thriller where everything is heightened. Fuck these creeps.

Francesca Eastwood as Noelle in M.F.A.

M.F.A. is altogether different, tonally. It’s set at a university, environments simultaneously mundane and deadly. Culturally we place less value every day on the safety of our children and young adults. Republicans’ first response to students whose activism dares to critique male aggression is to whine about “snowflakes” and “safe spaces” and to find reasons to blame victims of violence. How drunk was she? What was she wearing? Did she go to that party alone? Is she sexually active? Leite tears this bullshit apart with this fierce and necessary film. Francesca Eastwood is tremendous as Noelle, a vengeful rape survivor. She conveys this awful mess of anger and confusion and compassion all roiling and fighting for dominance – until she takes up a weapon, whether it’s a hammer or a pill or just the fucking power of her voice. Her resolve is terrifying and beautiful as a wrathful angel of death. The film is squarely in her court and I love it for that. Even as her actions have the potential to hurt friends, she is a hero because she fucking does something in the face of immovable social misogyny.

This was made before a rapist took control of our government; I can only imagine what fury it would bear were it made today.

Pale hallmark activism is as much a target here as the men who perpetrate assault in the first place; M.F.A has no patience for soft justice. Noelle first tries to influence campus norms by attending meetings held by a group of women whose ostensibly feminist mission is held up by their own fear of social disruption. This only makes her angrier.

M.F.A toys with familiar exploitation tropes; I imagine, though I’m being presumptuous, that Ms. 45 and Day of the Woman were back of mind for director Natalia Leite. The difference is that M.F.A. is not a horror film except insofar as the assaults themselves are horrific; vengeance here is earned and cathartic. Furthermore, as with Revenge, rape does not destroy its survivors in this film. It devastates them, and then their anger lifts them to their feet and gives them purpose. They don’t cease to exist as actual humans. Compare this to Ms. 45, which I like in general, but which gives us a heroine who has little personality to begin with and who is then transformed into an unfeeling human gun. There is so much more to Noelle in M.F.A. She is an artist and a friend and desperately wants to be a lover; her experience and her PTSD and her mission take none of this from her and in some sense heighten them.

I have a visceral reaction to these films that extends well past the tiny worlds they create: I watch them enjoying the idea that all men who carry these notions with them are made to hurt. As are all people who enable them. I don’t say this to equivocate, only to clarify my empathy: I nurse my own memories of assault, and I have often wished pain onto the people who put me through it. And by extension everyone who has dragged any humans’ bodies away from them. Let them know injury and death.

Women in Film: KILLING EVE is a Deadly Obsession Previous
Review: INCREDIBLES 2 Next

"He was licking me!"