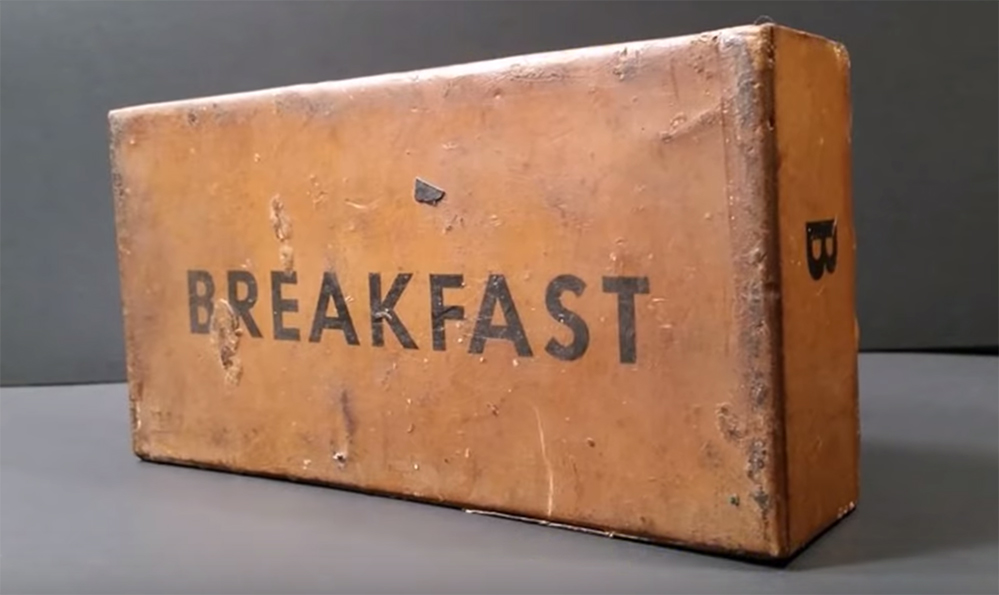 Yesterday I watched a man eat 118-year-old beef. He tore open a Boer War British infantry ration, finding an ancient tin can of cocoa, and another of meat. The former had long ago rusted open, leaving nothing but a calcified mass, but the latter’s contents were still somewhat edible and he boiled part of it into a thick paste and consumed it. This was on YouTube.

Steve Thomas is an MRE collector, and for the last two years he has run the channel Steve1989MREInfo. In each episode he opens a single military Meal Ready to Eat, prepares it as per its instructions (usually on an early 20th-century army food tray) and if it is still edible consumes it. But as well as hosting an unusual gourmet show he also provides the audience with an in-depth history lesson about his meal.

Watching the Boer War ration episode I felt a twinge of sacrilege as he pulled open the metal container. I had always thought of such things as museum pieces, to be preserved in their original condition in a glass case somewhere for future generations. Watching it destroyed felt wrong. But is it?

Military rations are designed to be opened and used. They preserve their contents in ways that are meant to be destroyed on opening, and the contents consumed immediately. As a result it is impossible to display one in its entirety without destroying it, and the food inside decaying soon after.

Steve’s videos teach their audience far more than they would learn staring at a display of antique rations at the Imperial War Museum. Not only do they see their contents, but also learn how each meal was prepared and how they tasted. The latter is what most people would be curious about, and short of collecting rations themselves this is the only way they could ever find out. Especially if they don’t fancy eating beef from a cow that died before anyone alive today was born.

One of the most common statements you hear from Steve’s fans is that they never thought this subject could interest them until they saw his videos. It’s not something most people find traditional historical displays of interesting and it’s specifically his format that makes them watch video after video after video.

This leads to an interesting question. What is the purpose of museums, or of preserving the past in general? Is it to ensure history survives into the future in real life, or in people’s minds? Is it more important to keep something intact than to enrich people’s understanding of it?

On the one hand, Steve’s videos give their audience a far better understanding of the past than a similar museum exhibit could. No one would ever know that 118-year-old beef was still edible had he not opened it. On the other hand there is the question of longevity. The knowledge his viewers gain stops with them. No future generations are likely to sit down and watch a centuries-old YouTube video about MREs, whereas they will visit museums. But even that’s assuming his videos survive that long, as digital information is easily lost forever. If YouTube closed down there would be nothing left, unless some enterprising soul transferred everything to 16mm film and kept them in a climate-controlled vault.

While Steve’s videos are at the extreme end of this kind of destructive education, though it should be noted he donates particularly rare items to normal museums, he’s far from the only person doing this. The firearms channel Taofledermaus filmed themselves testing a rare, antique Gyrojet pistol, which fires tiny rockets instead of normal bullets. The ammunition for this is rare, handcrafted and will never be manufactured again (for good reason, as it sucks). But as well as getting high-speed footage of how the gun and ammunition function when fired, they also recorded it malfunctioning in a way never before documented.

These channels are part of a genre I call “YouTube museums.” Along with others, like Forgotten Weapons, they give their audiences of literally millions a chance to learn about the past by bringing it to life. They are a true example of the Internet’s potential for democratization: in-depth history lessons by enthusiastic amateurs. As with much of the Internet, their long-term benefits and drawbacks remain to be seen, but for the moment I’m going to leave off the prognostication and go back to watching a man eat a 153-year-old cracker.

Off The Beaten Path: LAKE PLACID Previous
Review: ANGEL HAS FALLEN Next