Monkey Planet: The Birth of PLANET OF THE APES

Your Father was an Orangutan, and your Mother was a Chimpanzee! 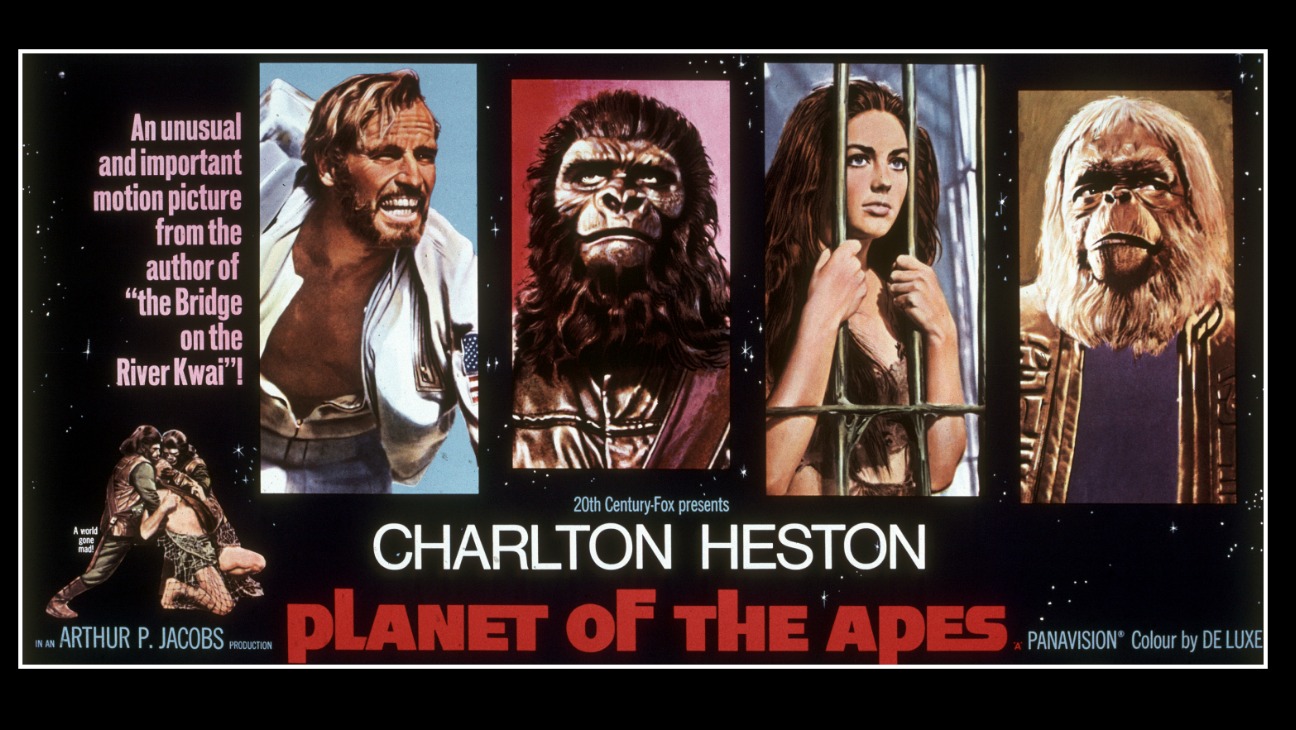 The year was 2001.  Tim Burton’s reboot of Planet of the Apes had just hit theatres, and I had seen it, and even enjoyed it,1 but I was looking for clarification on the ending that sees Spaceman Marky Mark return to an Earth ruled by Apes – how did that work, exactly?2  I had seen the original film, so I knew the answer wasn’t there, and I had heard the sequels sucked3 so I avoided those.  Instead I turned to the source novel, hoping to discover not only the answer I was looking for, but a great adventure about Man vs. Ape.

The book’s original translated title in the UK was Monkey Planet, which is wonderfully pulpy but I’m not sure it would have become as iconic.

Pierre Boulle’s novel La Planète des Singes is a Swiftian satire that introduces us to Ulysse Mérou, a journalist from Earth who joins two other men – scientists – on a trip to the stars. The main plot points are familiar to viewers of the original film; men land on an alien planet and find mute humans, the hero is captured and the others killed by intelligent Apes, he attempts to prove he is more than a mere animal, he meets stubborn opposition even as he meets allies, then escapes only to find the truth of his situation is far worse than he had ever realized.

I remember my disappointment as I read further and further that first time, my enthusiasm ebbing as it became clear that the book was like neither film, but was instead a decidedly less action-packed fable about an egocentric intellectual butting heads with the bureaucracy of an Ape-run planet – a planet that wasn’t even Earth! – with nary a fist thrown, and not a single utterance of “Get your stinking paws off me, you damn dirty ape!”

I was a young man, and disappointed, but not not entertained either.

And so I held onto the book, and years later, perhaps around the time of Rise of the Planet of the Apes, I read it again.  This time not to look for clues, but simply for the enjoyment, and the experience.  And the themes of the book became clearer to me, as did the parallels between the book and the films4.

There are many differences between book and film, the first one being the bookends that see a couple of spacefaring vacationers find a bottle floating through space with a manuscript inside written by Ulysse Merou.  They read, interjecting at first before settling into the narrative.  Once we get into the story proper we notice that aside from his tremendous ego, there is not much to Ulysse, but as our cypher I suppose that is to be expected.  His second defining trait is his profession as a journalist, and as such he is a keen observer who is more than happy to give us an evocative, though non-explicit, description of the nude Nova once they discover her on the planet Soror.

Ulysse is then captured and taken to a laboratory for study and experimentation, from which there is no escape, no run through the modern city5 terrifying small Ape children and their mothers; instead there is simply observation and slow and steady attempts to communicate with the Apes, who in this version do not speak English (or French, as the case may be), while also attempting to navigate the strange habits of his fellow human prisoners and not give into his baser desires to have sexual relations with Nova. She is, after all, little more than a beautiful animal to him.

This is a battle he loses, though he is filled with a deep shame over it, and once he is eventually freed as a sentient being, he cuts off virtually all contact with her.  There are a lot of words spent on Ulysse’s desire for, and disgust with, Nova.  The fact that he eventually gives in seems to be commentary on the fact that for all His6 advancements and delusions of grandeur, Man is still an animal and prone to giving into his baser desires.  It’s clearly approaching the idea that Woman is a temptress, and that Man is powerless against Her even as he makes arguments to himself that He values a woman’s mind as much as her body7.

There is also the matter of the savior complex that develops within Ulysse during the course of the book, especially once he has been freed and, along with Cornelius, studies the ruins of an ancient human city.  Unlike the film which fills as many corners as it can with tension and conflict and sets the bulk of the climax during this sequence, the book spends a relaxing month at the site (arrived at by plane!), before shipping Ulysse home to the scientific institute where he continues to work with Zira.  It is at this point that he decides that he is, in fact, on a mission from God to restore the position of the human race to one of superiority to the Apes, who he constantly refuses to see as equals to his own place in the universe, even as he asks to be seen as equal to them.

It is this spark of condescension in Ulysse that clearly carried over to Heston’s George Taylor, even as the more intellectual nature of the character was stripped away and replaced by misanthropy and brash reactionism.  It’s fascinating to note the difference between the form each man’s ego takes. Ulysse is unable to see the Apes as his equals despite their virtually identical natures, whereas Taylor is disgusted by them because they are too similar to the humanity he attempted to leave behind.

“There must be something better than man.”

Rod Serling was the first to adapt the book, and it is largely his draft and thematic refinement that made it on screen, aside from the addition of certain one-liners, and the odd name change (Taylor was named Thomas in his original draft).  It was Serling who most famously changed the ending of the book8 to place the Apes on a post-apocalyptic Earth, proving Taylor’s misanthropy and distrust of mankind correct.

More interesting than the many differences between book and film are the many things that are carried over, especially in the subtext of the material.  And not just to the original film, but to the sequels and reboots as well over their long tradition of nihilism and misanthropy.  There is an idea in the book that never (as far as I can remember) explicitly gets any play in any of the films, which deals with the way apes learn by imitation.  The entirety of the Ape culture in the book was built on imitating first the humans they replaced, then over 10,000 years they increasingly imitate themselves, leading to not just a slower pace of civil and scientific evolution, but also the curse of constantly repeating their mistakes.  Yet the idea is woven into the texture of every film, and is perhaps the central thesis of the series – that we, and any being or civilization that follows us, are doomed to repeat the mistakes of the past because we are unable to break the habit of tradition.

All indications point to the new Apes film continuing that message, and while the tone, scope, and details are very different between the book and the various films that have been built upon its bones, there is much to discover within its pages.  During this read-through I enjoyed the novel more than before, better picking up on Boulle’s ideas, while also enjoying the egotistical brandishment of intellect he allows Ulysse throughout.  It is a quick read, at times darkly funny, and often thought provoking with far more ideas splashed across its pages than I am able to relay in this article. On its own it is well worth a read, but that such a poignant and enduring film series was spawned from it should guarantee that every Apes fan has a spot for it on their bookshelf.

Things We're Digging This Year Previous
Does It Look Like It's Our First Time? GOLDENEYE Next