No, this isn't about the Oscars 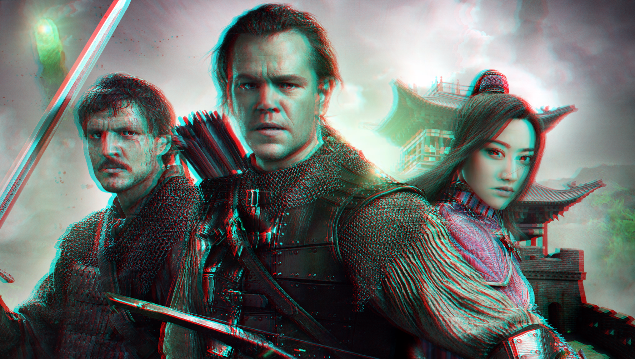 It was just after Batman told me to put my 3D glasses on that I realised something was wrong. The trailers looked off. In fact they looked horrific. The colours on the screen split apart into multiple pictures, overlaid like some horrible, freakish nightmare in which the cast of Pirates of the Caribbean 5 had crawled out of an HP Lovecraft story. I removed my glasses for a second to check, and found the screen scarcely looked worse without them.

After checking with my friend next to me that the problem wasn’t on my end, I ducked out to the reception desk where, after singing along to the Moana soundtrack playing in the foyer while a man bought his tickets, I was informed the problem was being taken care of. I informed my companions of the good news and we sat back, waiting out the scarcely intelligible mess before the film. Then The Great Wall finally started and my eyes gushed blood.

As the grand, sweeping landscape shots of the Chinese countryside stretching off to the horizon began, I let out a little yelp as my vision was ripped from my skull. Close-ups weren’t that bad, as in the extended campfire scene done so exclusively in such that it ends with a crevasse appearing from nowhere next to the actors, but when scenes demanded armies stretching into the distance nausea welled up in my throat.

But the film kept going. It had been twenty or so minutes since I left, and The Great Wall was still a maelstrom of cinematic vomit. Soldiers marched phased halfway through their brightly-coloured clones, and I mistook a man in leather fetish wear for a woman in a bikini. It didn’t take long for people to start walking out. I counted them on my fingers, and as I got to ten an usher walked in to apologise for the debacle and assure us their manager was fiddling with the projector to fix it.

For the next five minutes we awaited the moment the movie would snap back together, as the Power Rangers-attired Chinese army prepared to fend off the mighty horde, and the usher watched eagerly from the side of the room. But it was not to be. The screen went black and our usher informed us they were having to switch the projector to 2D to continue, and that everyone would receive a full refund and free tickets for future screenings. Many left immediately to take advantage of this offer, but then the screen came back on.

“Congratulations, you fought really well in that battle.”

“Thanks for saving my life.”

We’d missed the battle! Half the audience laughed, and the rest clapped in dumbfounded awe. The screen went blank again and a third round of apologies issued, as they announced we were restarting the movie from the beginning, and again anyone was free to leave and get a refund. As the film started over, ruining my attempts at a selfie to commemorate the occasion, I saw only about twenty people left in the audience that must have been initially at least three times that. But the film was in focus and the grand, sweeping landscape shots began over, letting us finally watch the movie and enjoy the picturesque European tour taken by Matt Damon’s accent.

No, this isn't about the Oscars