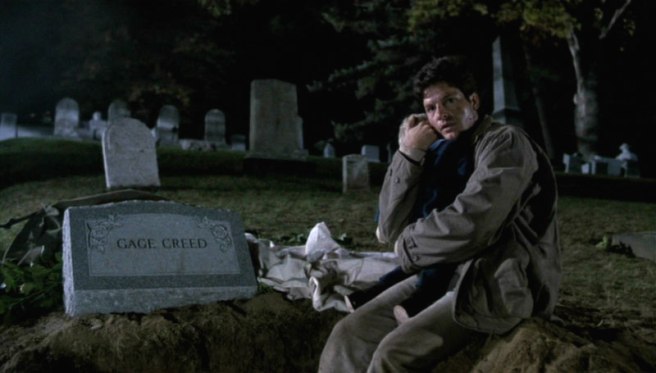 Each week the Lewton Bus gang will get together and write up a brief account of something we’re digging hard on this week. It can be a movie, TV, a particularly sexy banana, music, or anything, really! This week we’re celebrating the work of seminal author Stephen King by looking at all the stuff we dig about his work and the many adaptations that have come out of it. Check out our other King Week content on the site!

When my father was a wee lad, my grandfather came back from a trip with a toy steamroller. “I brought you a souvenir,” my grandfather told my dad. For a while there my adorable little dad thought that steamrollers were called souvenirs. “Look at that souvenir!” he’d say, passing by a construction site.

Cute, right? Anyway, here’s a video from Steven King’s Maximum Overdrive, where a souvenir runs over a child!

King’s turn in Creepshow is so over the top and fun to watch that it’s easily my favorite thing about the whole film. Granted, his script for Creepshow was also a lot of fun, but his performance is always what I’m going to remember about it.

There was a number of years where Stephen King wrote editorials for Entertainment Weekly and, back when I was still reading the magazine, it was basically my favorite part of opening up a new issue. The veteran author is a lover of pop culture on a level that rivals any of our own here at Lewton Bus, and he would write about whatever he wanted. My favorite pieces by him were usually his year end wrap ups, whether it be about books, or movies, or music. King would never confine his lists to what had been released that year, he would simply list the things that he had enjoyed over the past year and recommend them.

I had always felt a kinship with King. Serendipity made it so I seemed to read his books at the exact appropriate time in my life to be consuming them (I wept the night of finishing The Dark Tower before my senior year of college. I had stayed up until 3am, too engrossed to pause near the conclusion. It’s a perfect ending, by the way). Reading how closely our opinions on pop culture were aligned (although I will likely never be the Lost-devotee that he was) made us feel as close as friends.

King writes in his outstanding On Writing that the act of writing and reading is a form of telepathy between two parties. Those written words reach out beyond the page and, from one person’s heart, mind, and hand, they reach into another. I’m glad to have found that connection with King. He serves as a constant inspiration to me as a storyteller.

Definitely check out the archives of his work for EW. It’s also a nice reminder of how incredibly funny the man is, even if the “Master of Horror” title has stayed with him since his early days.

I dig Person of Interest because it’s easy to understand while cracked out on post surgical drugs.

Sorry, Tanner, that’s all the time we have! We hope you enjoyed our King Digs and be sure to check out the rest of our King Week content on the site.

What do you dig about Stephen King? His books? His movies? His screenplays? Let us know in the comments!