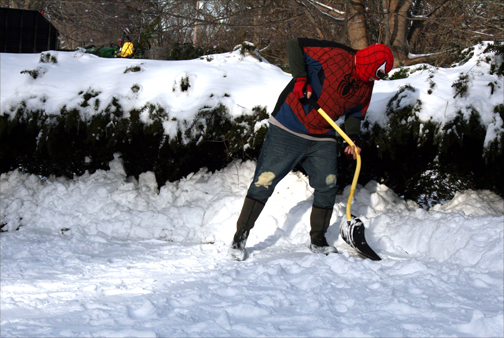 Each week the Lewton Bus gang will get together and write up a brief account of something we’re digging hard on this week. This week, it’s a special Digging Edition featuring things we love about Spider-Man! Tell us what you love about the Friendly Neighborhood Wall-Crawler in the comments. Is it his movies? His comics? His alternate realities? Hell, maybe even his clones!

And don’t forget to check out the rest of our Spider Week content!

This is my favorite villainous performance in a superhero movie. Dafoe is fucking perfect. You empathize with and get the character while still being absolutely terrified of him. Yeah, mock the costume all you want, or dismiss it as “camp”*, but Dafoe is absolutely spectacular with the balancing act that this character requires.

*Camp =//= Bad. Camp is its own art form and should not be used as a way of writing something off.

The Comics Curmudgeon has been part of my online reading diet off-and-on for the last decade and change, and it is a marvel. Josh Fruhlinger has the remarkable ability to find consistent humor in consistently bad newspaper comics, and the commenting community is just as funny. It’s enough to make you find value in that meddling biddy, MARY WORTH!

His coverage of the goofy and chronically superheroics-light Spider-Man comic is a regular highlight.

I grew up watching the 1970s Spider-Man TV movies with tow-headed Nicholas Hammond as the way-too-old Peter Parker (he was 27 at the time). It was a short-lived phenomenon, popular enough, but only airing sporadically. It was 13 episodes long and it’s pilot appeared in theaters (this happened a lot back then, same with Battlestar Galactica). They were TERRIBLE, but they were my Spidey.

I best recall the pilot; it featured a dumbass plot about a psychic guru trying to con a bunch of NYC people to rob banks and ultimately off themselves via mind control. It used these crazy optical effects to portray the psychic happenings and for my 5-year-old brain that was a lot to take.

Even the wall-crawling was incredibly obvious – I remember telling a parent or grandparent or something: “That’s dumb, he’s just crawling around on a fake wall on the ground and they’re pretending that it’s up and down.”

I have never not been a skeptical jerk.

“In February of 2015, when it was announced that Marvel Studios and Sony Pictures had struck a deal to bring the most famous and beloved superhero of all time into the most successful film franchise of the 21st Century, nerds worldwide rejoiced. This rejoicing quickly turned to discussion about how this marriage of convenience would work and what an MCU Spidey film would even look like. When they started promising John Hughes meets Brian Michael Bendis, they caught this writer’s attention, but the question in the back of my mind was whether or not they could deliver. After having seen the film which can only be described as The Edge of Seventeen meets Spider-Man 2, I’m happy to say I don’t know how I ever could have doubted.”

The old 60s cartoon may have been my first, and main, introduction to the world of Spider-Man, but The Amazing Spider-Man PC game is a close second. It was a frustrating and slow thing to play even in 1990, but that didn’t stop me from sitting in front of our computer and, after loading the game via 5” flopy discs and a series of DOS commands (look it up, kids), trying to time switch presses and stilted jumps just right as Spider-Man half floated, half fell off of walls and ledges whether I wanted him to or not.

I never made it close to beating the game as a kid, and I doubt I would fare any better as an adult, but if given the opportunity, I’m sure I could spend a few hours trying.

As of this writing I have not yet seen Spider-Man: Homecoming. Despite being delighted by Tom Holland’s take on ol’ Web-Head in Captain America: Civil War, my excitement for Homecoming, and, in fact, any future Spider-Man movie, must tempered by the fact that it is cosmically unfeasible to make a better Spidey movie than Sam Raimi’s Spider-Man 2. Hell, I’ll go further and state definitely that Spider-Man 2, plain and simple, is the best superhero movie ever made.

Not since Richard Donner’s original Superman has there been a more perfect character study of a costumed crime fighter. Some have come close – Wonder Woman, Captain America: The First Avenger, The LEGO Batman Movie – but none of these delve as deeply into their characters’ psyches the way that Donner and Raimi’s masterpieces do (and, frankly, Raimi does it even better than Donner).

What makes Peter a hero is not his powers stemming from a radioactive arachnid bite, but the fact that he continues doing the right thing even as every miserable mundane struggle of life befalls him. Peter’s fight is with his own selfish impulse to just say “forget everyone else, I just need to take care of me”, and after Spider-Man 2 spends two hours kicking Peter in the balls, you get to see where he’s coming from.

But Peter overcomes these selfish desires. He defeats the villain and saves the day, not with punches, but with an appeal to selfless empathy. We all might not be able to climb up walls, but, as Aunt May notes, we all have the capacity to put the needs of others before our own.

Essentially Spider-Man by way of a horror/alien invasion movie, this 2008 video game places the web-slinger in a colorful New York City that slowly succumbs to madness and despair after Venom infests it with symbiote offspring.

Having Spider-Man in such a creepy/apocalyptic scenario helps to highlight what makes him great. His sense of humor and heroic nature act as a beacon of hope where none can be found. Not to mention that the game encourages you to save as many random civilians as possible.

However, Spidey is in possession of the corrupting symbiote costume, so in certain sections, you’ll have to decide to act a hero, or as an anti-hero, which will determine the conclusion. It’s also wroth mentioning that the climax is bonkers thanks to an imposing Kaiju-esque boss battle.

Web of Shadows was a very welcome genre-twist in the Spider-Man sandbox canon, so I hope it gets tackled again.

I’ve never been a big Grand Theft Auto person, but I love the concept of open world gameplay in a giant city where the world is your oyster.  This is probably why I love Spider-Man 2 for the Playstation 2 so much.  It has everything — A massive open world, constant side missions that are short enough to not get tedious, a main plotline that takes its cues from both the comics and its namesake film (the best superhero film of all time), and the added fun of webslinging your way through New York City.  I bought a used copy of this and it showed up on Saturday and I’ve already logged about 10 hours playing it, which is a lot for me.  Spider-Man 2 is legitimately one of the five best games I’ve ever played, and I can’t wait to spend more time as Peter beating up robbers and rescuing falling construction workers while jumping around all nimbly bimbly from skyscraper to skyscraper.

Spider-Gwen, the Gwen Stacy from Earth-65, is, in my opinion, one of Marvel’s greatest storytelling coups of the 21st century, alongside the revival of Bucky Barnes and the introduction of Kamala Khan as Ms. Marvel.

Gwen Stacy famously dies in the 616 Marvel comics universe, and while her death precedes the “fridging” trope by almost two decades, it has enough of those same elements to be considered a part of it. It’s not great to be able to say that Gwen’s greatest contribution to a comic as a character was to die, which is one of the many reasons why Spider-Gwen is such a spectacular feat of reappropriation.

Not only is Gwen not the helpless damsel in distress anymore, but now she’s the hero. As Spider-Woman, her origin isn’t dramatically different than Peter’s. She struggles with the same questions of responsibility and power that he did as a young man, but now it’s in the hands of a badass, drum-playing young adult woman.

Introduced in Dan Slott’s expansive Spider-Verse crossover event (a blast) she quickly gained a following and earned herself a miniseries, which has now transformed into an ongoing from the fantastic team of Jason Latour and Robbi Rodriguez. In the pages of her comic, Gwen is genuinely funny, cool, and heroic. Her first arc ends with, instead of getting into a huge fight with a former friend, talking him down and convincing him there’s a better way than violence.

It’s a remarkable achievement in a medium devoted to big slugfests that a character can have the strength to choose a different path, and I was completely floored the first time I read it. I knew that the creators really cared about making Gwen not just a good hero, but a good person, as well.

SPIDER-MAN: HOMECOMING Is An Absolute Delight Previous
The Bus Stops Here: Spider-Man! Next