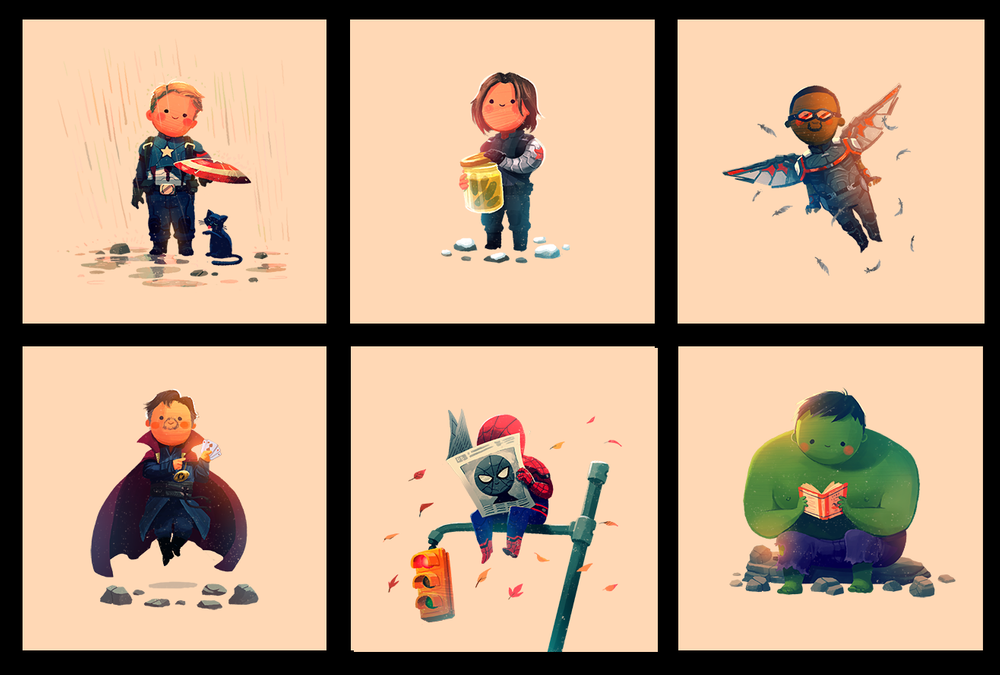 Each week the Lewton Bus gang will get together and write up a brief account of something we’re digging hard on this week. It can be a movie, TV, taking that first satisfying bite of an apple, music, or anything, really!

This week, the gang continues celebrating the release of Avengers: Infinity War with INFINITY WEEK, a continuation of our biggest long-form series to date, There Was An Idea…be sure to catch up on all our great articles!

With the Good Hair

Masculinity is an important theme in the Captain America trilogy, especially in the poignant arc Bucky goes through. The way Steve Rogers’ best friend is tortured by Hydra to become its iron fist works as a terrifying metaphor for society teaching men to repress what we feel and focus our strength on damaging people, including ourselves.

The beauty of this story is that instead of beating Bucky out of his condition, Captain America knows that the only solution is to remind him that he’s not alone and that sharing his pain with others is not only his right, but a necessary step to grow.

In a cinematic universe full of excellent performances, Sebastian Stan’s portrayal of Bucky stands out thanks to the sadness and rage he conveys with only a few understated facial expressions. And his chemistry with Chris Evans adds warmth and optimism to gut-kicking scenes.

Bucky’s story is about embracing your emotions to heal from traumatizing experiences, and a good part of why the Captain America movies remain my favorite in the MCU pantheon.

The Marvel Cinematic Universe began with Iron Man. Well, sort of. That very well could have been a stand-alone movie had it not been for the famous ending credits stinger, wherein Nick Fury pitches Tony Stark on the Avengers Initiative. From there on, stingers have come to be one of the defining characteristics of the MCU, manifesting as everything from goofy comedy bits to straight-faced or even dire teases of narrative developments to come. There are some truly great ones, including the famous schwarma scene at the end of the first Avengers film.

But my personal favorite stinger is a recent one, and that’s the one that brings Spider-Man: Homecoming to a close. It’s a single shot of Chris Evans’ Captain America, recording one of apparently many educational videos for high school kids. He may be a war criminal or something, but he’s still inspiring the youths in classrooms across the country.

In this one, he’s educating the kids on the value of patience, in the process taking the piss out of both the MCU’s own storytelling techniques and the audience that was dumb enough to stick around for them. I love it.1

I’m digging my gig hosting classic movies at the Alameda. It’s a fun gig. Every week, I get to go, talk about great movies and share great movies with people, but I also get some phenomenal perks. This week’s perk was getting to see Infinity War on Wednesday night when it was QC’d by the projectionists in a mostly empty theatre with my choice of seats rather than having to deal with a packed house, watching it with the mobs that will be seeing it this weekend.2 Also, I got to see it fully 16 hours before my most dedicated east-coast friends.

Also, today is my birthday, so this evening, I’ll be digging bluehounds down at Cafe Van Kleefe in Oakland where they squeeze fresh grapefruit for all their juice-based cocktails…3

I want to avoid spoilers as much as possible for folks (be on the lookout for our Spoilderdome soon, friends!), so I’ll be brief.

Josh Brolin, one of our finest actors, delivers an unprecedented performance as the Mad Titan Thanos in Avengers: Infinity War. It’s the kind of instantly iconic performance that will be discussed and appreciated for years to come. The Russos teased that Infinity War would in many ways feel like Thanos’ movie, and it’s all that and more.

This movie is a miracle. I can’t believe it exists.

Tanner “No Regard for Theme Weeks” Volz – Panasonic DSLRs

“This is an incredibly bold film on so many levels. Its scope enormous, its stakes almost immeasurable, and its aim high, this was in a lot of ways an incredibly high risk film, one that could have easily fallen apart. The fact that it not only holds together, but excels at it’s stated goals is a testament to what Kevin Feige, the Russo brothers, and the rest of the MCU crew have done over the last decade. This is a film that takes a lot of chances, and one that seems to be okay with being potentially divisive. It’s also an experience so truly unique that I am still struggling to find an adequate reference point to compare it too. This is a monumental undertaking, a film that refuses to play it safe when playing it safe would be a guarantee of success. It’s the kind of film where if the directors had missed their mark, it would have fallen apart, but they did not miss.”

That’s it for our MCU digs, friends. Be sure to let us know what you love most about the Marvel Cinematic Universe down in the comments! And, hey, wait a minute, get off your butt and go see Infinity War, huh? Those Infinity Stones aren’t going to find themselves! Then come on back and get ready for some great discussion under our review and upcoming Spoilerdome.