It's a fine week for rubber butts and cannibals 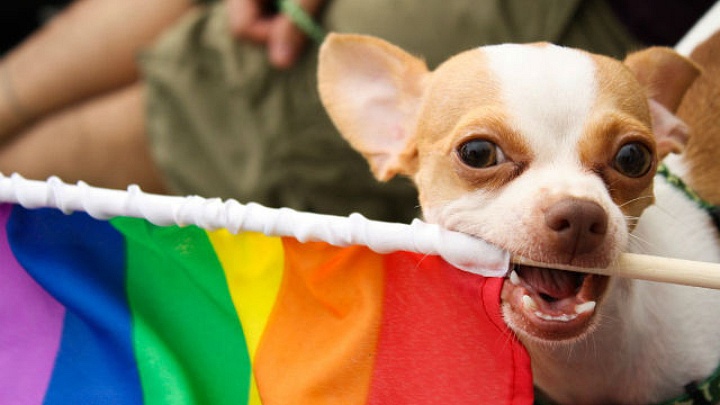 Each week the Lewton Bus gang will get together and write up a brief account of something we’re digging hard on this week. It can be a movie, TV, the Return of Andrew, music, or anything, really!

It’s Pride Week, y’all! All week long Lewton Bus will be celebrating queer art and the artists behind it, and Things We’re Digging is no exception. Come on and check out some of the great queer art we love having in our lives.

Mavis Roberta McGee – The Works of the Wachowski Sisters

The Wachowski Sisters are without a doubt the two most well-known transgender filmmakers of our time. While they only came out fairly recently (and, in Lily’s case, was basically coerced into doing it), the Wachowskis had already left a major stamp on American cinema with their Matrix trilogy, some of the most well-known and influential blockbusters of our time. They also left a major stamp on queer cinema with their incredible debut picture, Bound. Going back through their filmography after their coming out, it’s very easy to see how their queerness has been a major part of their work, with all their media being touched in some way by it. I adore these two and I hope that they’ll be working on more things soon.

Also, Jupiter Ascending is the goddamn business and y’all better accept that.

I’ve been trying to cram my holes with everything I can find that features bisexual dudes and let me tell you, the pickings are SLIM. I originally set out to write a thing for Lewton Bus’s Pride week and have discovered a few gems but the bottom line is this: bisexual men are apparently superheroes who can show up anywhere, charm anyone, do sex any time, and look amazing all the while.

My favorite example of SuperBiMan at the moment is from Pasolini’s very weird and charming Teorema, from 1968. Terence Stamp splurts from the earth itself into the lives of a rich, generally boring Madrid family and proceeds to eat their food, sleep in their house, and fuck all of their junk. All while possessing the above face, with those GODDAMN EYES.

These poor sods enter into a sort of post-coital amnesia: Everything in their lives up to this point was so forgettable compared to wrapping themselves around this hot young pole that they remember, literally, nothing. Or at least, they care about nothing from before. It’s a funny film, but also sad, because sex addiction is sad, but also funny, because sex addiction is funny.

It’s on Filmstruck which you already have because you are a good person who respects film history.

When I first sat down to think about my Pride Week themed Dig for this week, my thoughts gravitated towards Hannibal, perhaps the most wonderfully subversive and queer show ever to air on network television. Then I thought about the rest of Bryan Fuller’s oeuvre and I realized that what I really should be digging isn’t just one of his works, but the man himself. For years now in work as full of heart as Pushing Daisies to shows like Hannibal where people get full of heart1, Fuller has crafted an inclusive television universe filled with queer characters and stories. Fuller also just honestly seems like the swellest dude under the sun. He celebrates his collaborators and loves his art and fans with grace, humor, and aplomb.

Fuller seems so brilliant and full of thoughtfulness and affection for his stories that it baffles me to this day that he cannot seem to hang around as a showrunner for longer than a few seasons, having left duties on both American Gods and Star Trek Discovery in the past few years. Here’s hoping we get that fourth season of Hannibal we all deserve, or that some day soon a network gets it through their head that a Bryan Fuller show is the best thing to invest in.

This criminally underrated superhero romp has always had a special place in my memory. A spiritual successor to Adam West’s Batman TV show, Joel Schumacher’s take on the dynamic duo is silly to the extreme, and it owns that fact like a badge of honor. Aside from bombastic choices like Gotham’s kitsch aesthetic, a game cast and instantly memorable dialog (Mr. Freeze’s ice puns are classics), what makes Batman & Robin special is that it nails the importance of family in Batman’s life. The Dark Knight is a natural loner, and his vigilante activities are always messing with his mental health. But thanks to Robin, Batgirl and Alfred, he stays stays hopeful about life and learns to see his problems from different perspectives. Another aspect I appreciate a lot, Batman and Mr. Freeze end up sympathizing with each other because they realize they have common ground in the pain that comes from losing someone you care about. Even after all the great comic book movies we’ve been getting in the last 15 years or so, Batman & Robin’s mix of sincerity and cartoonish fun make it a standout; and it could only come from Schumacher’s idiosyncratic mind.

We hope you enjoyed our Digs for Pride Week! Be sure to check out the other pieces LB is putting out to celebrating queer artists and art, and stop on down in the comments to let us know what YOU’RE digging this Pride Week!