A big heaping plate of digs for your weekend 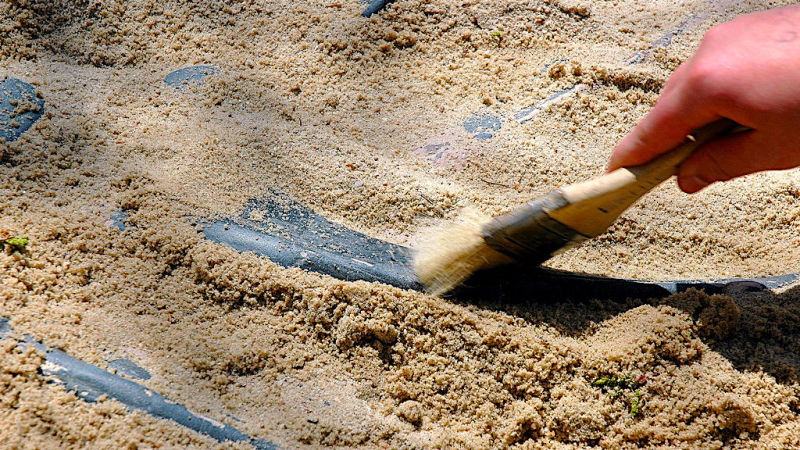 With the Oscars blessedly behind us, Things We’re Digging is returning to it’s regularly scheduled programming! By regularly scheduled, we mean coming out at all! So here’s to a new age of Digs, from far and wide. A reminder, Things We’re Digging is a weekly feature where the LB contributors put forth thoughts on anything they care to think about. It can be anything from movies, books, TV shows, to that new pair of pants you just can’t wait to slip into.

When I was a teenager I visited family in the San Francisco Bay Area and was blown away by, among other things, the Bay Bridge. The scale of the thing, combined with the double levels was really impressive to me, and it lead me to an idea: What if there was an earthquake—the fabled “Big One”— and the bridge wasn’t destroyed but damaged enough that it was no longer usable? I started work on one of my many uncompleted teenage science fiction novels. The premise was that homeless people occupied the post-quake bridge and created their own lawless society. I was about 30 pages in when I started reading William Gibson’s 1993 novel, Virtual Light.

That son of a bitch.

He’d beat me to that premise—that exact bridge—four years earlier. My rage still boils. Despite that anger, Gibson ended up being a big influence on me. The visionary cyberpunk writer, who coined the term “cyberspace” while writing on a manual typewriter, was an influence on just about everyone. If someone finally succeeded in adapting Neuromancer for the screen it would probably be knocked as being too derivative. It’s what I like to call the “Halloween effect,” where a work is so thoroughly influential that it is sometimes viewed as a “generic” example of the works it influenced. We wouldn’t have, among a lot of other stuff, The Matrix or Ghost in the Shell without him.

I hadn’t read Gibson since I was in my early 20s (back when there were still North American camels and giant armadillos), but recently picked up and reread Mona Lisa Overdrive, the third novel in his “Sprawl” trilogy. It holds up. Really well. Strange and exciting and with some really lovely prose. That lead me to reread Virtual Light, which also still holds up, despite my lingering resentment and the fact that it takes place in the futuristic year of 2006. Gibson continues to have the goods.

H.M. Flores – The Boy Who Harnessed the Wind

Chiwetel Ejiofor makes for a confident full-feature directorial debut in this heartbreaking but hopeful pro-science story about the importance of education and family support. As always, Ejiofor doesn’t disappoint as an actor, either. Shining in a complicated role that requires him to challenge the viewers’ expectations from scene to scene. And newcomer Maxwell Simba is a promising talent to keep an eye on in the future. The Boy Who Harnessed the Wind is now available on Netflix.

Ryan Roch – Bowie In Berlin: A new career in a new town

I’ve always been a Bowie fan. From the moment I saw Labyrinth as a child, the guy has been wedged in my brain as pretty much the singular icon of Rock and Roll. Ultimately, that kids movie he did with the muppets and a young Jennifer Connolly stopped being of much interest to me, but the man himself only grew more and more fascinating and mystifying as my own tastes grew and evolved. However, I’ve never done much reading about him. To be perfectly frank, while I love Rock history, I find most music writing to be, how shall we say… up-its-own-ass worshipful drivel peddled by people who know next to nothing about music, stardom, or writing. It’s mostly salacious, self-serving, boring, or patently PR crap. I’ve only read a handful of books about musicians, and most of the ones I’ve loved have only flirted with biography as a focal point on which to hang other topics.

I also grew up playing music, more fascinated with the way people thought musically than in specific things that happened, or stars they knew. But Bowie is a little different (wouldn’t he have to be?). I’ve always found what snippets I’ve run across interesting, especially considering this is a guy who has lived several very public lives as a number of aliases. A particular era that has always fascinated me more than others is the period immediately before and during the creation of three albums known as “The Berlin Triptych”. Having become an international Rock God off Ziggy Stardust and Diamond Dogs, Bowie had pivoted into a sound he called “Plastic Soul” and his evolutions were now coming as rapidly as the cocaine he was consuming. He’d also become so ravaged by his drug use that he survived off of milk, peppers, cocaine, and the arcane spells he regularly cast to ward off the ill magicks of his psychotic delusions (and possibly Jimmy Page).

Bowie was so far gone he had no recollection of recording his iconic album Station To Station. Realizing that he was thoroughly out of control, Bowie cast off for Europe to clean up, and in the process created Low, Heroes, and Lodger. Three albums that, with their stripped-down approach and emphasis on electronic and ambient tones, revolutionized what a “David Bowie record” even meant. So when I found out that there was an entire book about this period (written by Thomas Jerome Seabrook, whom I’d never previously heard of), I bought it immediately. I’ve made it a few chapters in at this point, and I have to say that it is exactly what I was hoping for so far. This book not only gets into the historical stuff, but dives deep into the actual writing and creation of the songs and albums. For a person like me, who loves Rock history and grew up playing and writing music, this stuff is essential.

My Oscars watch this season was pretty abridged, but the highlight for me was getting to go over Spike Lee’s latest with a fine-toothed comb. I had liked it the first time, but I watched it the second time with a few younger viewers, and I noticed something I previously hadn’t: It’s a great educational film disguised as a crowd-pleasing Oscar movie.

As Lee dramatizes the story of Ron Stallworth infiltrating the KKK in the early ‘70s, he’s also interested in dramatizing the cultural and historical context of the time. The movie’s received some blowback for a scene when the music stops (metaphorically and literally) and the characters talk about how a white supremacist might become President one day, but fewer are picking up on how it relates to the scene that’s literally a gallery of posters to introduce people to blaxploitation, or the scene where characters talk about popular black sports figures  in the same careful, explicatory way that scientists might talk in a disaster movie.

The movie would be valuable for that alone, even if it weren’t hilarious and stirring.

While Free Solo’s win of the Academy Award for Best Documentary Feature last Sunday was definitely more than deserved, it wasn’t my favourite documentary in the race. That honor would go to Bing Liu’s Minding The Gap, an astonishingly intimate and daring portrait of…something. I’m hesitant to give the game away, as I knew only the bare minimum going in and walked away absolutely floored. All you really have to know is that it starts with filmmaker Bing Liu chronicling the lives of two of his friends, Zach and Keire, while taking a look at the bond that binds the three of them together. For a while, the main thing that ties them together appears to be skateboarding, but after a while, Liu unearths something else that these young men share together – something that, looking back, had been bubbling under the surface of the entire documentary all along – and that’s when Minding The Gap shifts gears into something truly heartbreaking. While it’s nowhere near as visceral or virtuosic in its direction as Free Solo, it’s still a heartfelt gem of a film that absolutely deserves your attention, and deserved the Academy’s as well.

After only knowing the show through the various memes that it spawned, I finally took the plunge into the mad world of Eric Andre, and I fucking love it. It’s not something I’d thought I’d enjoy on first glance, but it definitely won me over with its absurdity. I’m looking forward to watching more.

The less we talk about the Oscars, the better. But a few things stand out. First, one of the highlights was Bradley Cooper and Lady Gaga performing “Shallow.” We were all getting the vapors. Second, shout out to Jason Momoa in a pink velvet suit with a matching pink velvet scrunchie.

I found out later that he already owned the scrunchie and he loved it so much and found the color and fabric so beautiful that he asked for a suit to be made to match it. The last thing I am super into this week is broccoli.

That’s right. Broccoli. It’s one of my desert island foods. Don’t be a hater.

Last week I finished reading Larry McMurtry’s Pulitzer Prize winning 1985 iconic Western, Lonesome Dove. It was my second McMurtry, after I read Comanche Moon last year (prompted as I was by the To-Read list in the back of Stephen King’s On Writing).

As all his books in his Lonesome Dove series, the book follows the adventures of Captains Augustus McCrae and Woodrow Call. The first book he wrote in the series, it actually takes place with the two former Texas Rangers in their middle years, though no less formidable men of the frontier were they than he would show them to be in his prequel novels.

The book is profoundly epic, spanning a year in the life of the men and their company as they drive the vast distance between the southern most edge of the United States to it’s northernmost. McMurtry has a gift for describing the frontier and the world these men and women inhabited with a deft hand that illustrates it perfectly in your mind. The vast spaces on the plains coinciding with the equally infinite night skies filled with stars. It’s at once overwhelmingly lonely and peaceful. That contrast, the sadness with the beauty, is the most succinct way to describe the tone of the book.

McMurtry doesn’t fawn over the era, despite the inherent romanticism at play in the environment and story. He never shies from the horrors of frontier life, with desperation and constant loss of life being major players in the story. When people die there is often very little fanfare. There will be as simple a sentence describing what happened as he would use to describe the cowboys sitting for dinner. His characters, as capable as they are, are also deeply flawed human beings, most often marred by pride and hubris that cost them dearly over the course of the book.

There is an ache at the heart of Lonesome Dove. It is an old fashioned sort of ache, but one anyone knows deeply. The longing for a thing you don’t have and never will, but maybe never even existed in the first place. It’s one of the most beautiful and sad books I’ve ever read.

That’s all for this special edition of Things We’re Digging! Be sure to check out our future editions as we see what everyone here has been appreciating lately. And stop on down in the comments to let us know what you’re digging this week!