We should have called it Hitman Week 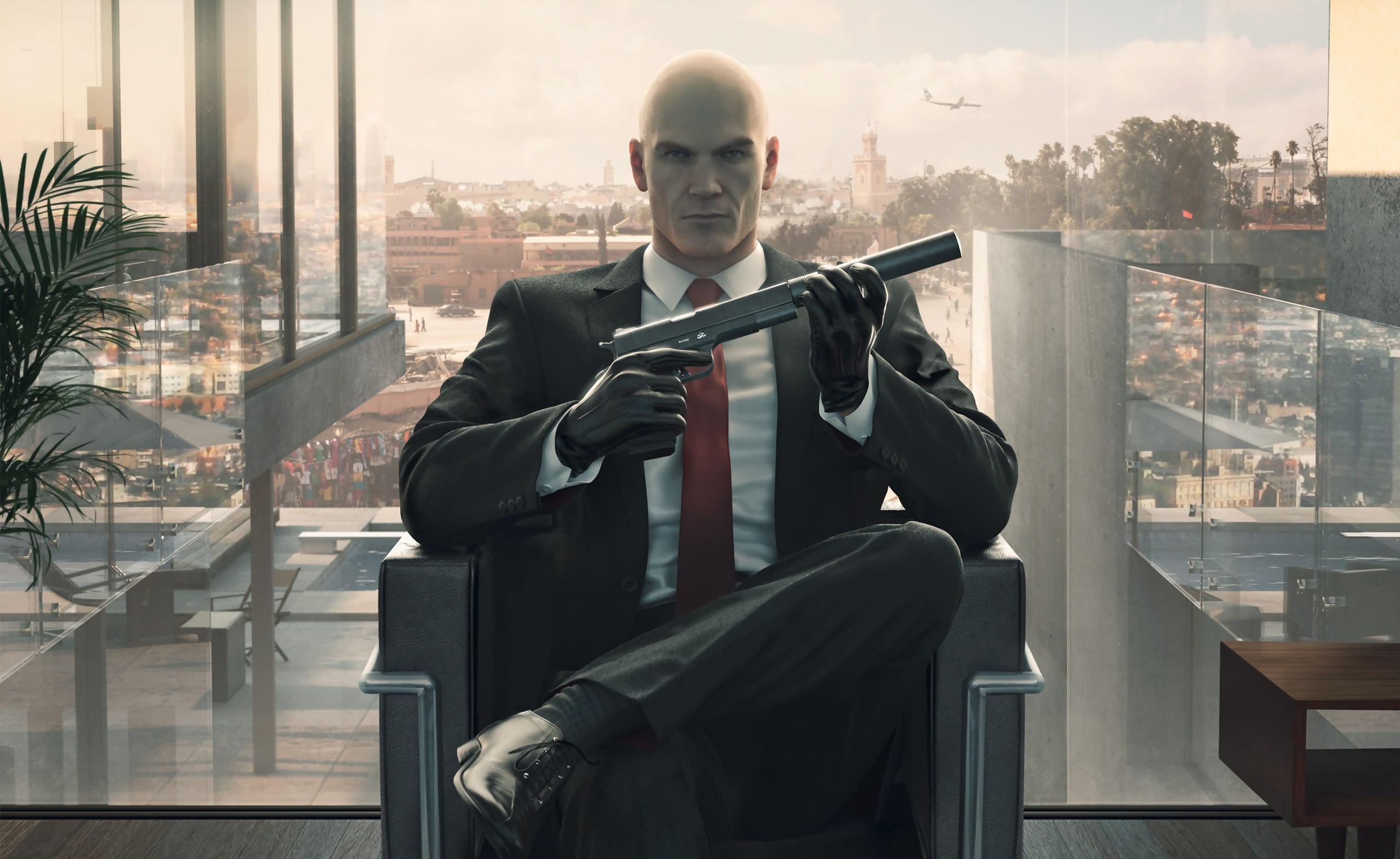 For the uninitiated, each week the Lewton Bus gang will get together and write up a brief account of something we’re digging hard on this week. It can be a movie, TV, a grumpy assassin with no hair and a penchant for sadism, music, or anything, really!

Recently on the recommendation of several of the Lewton Bus gang, I picked up a copy of the latest entry in the Hitman franchise for my PS4. It’s a game that’s very described as James Bond meets Tom and Jerry and I gotta say, it lives up to that description.

Each level of the game requires you to assassinate what basically amounts to a Bond villain, while giving you total latitude as to how you go about doing it, from something as simple as shooting them with a silenced pistol, to my personal favorite, dropping a giant plaster moose on them while they sit for a television interview.

It’s a game that rewards meticulous planning and immeasurable patience and is an absolute blast to play as there are about 20 different ways1 to beat any given level. I’m looking forward to going back and trying to up the absurdity quotient on me already completed levels soon!

This week Boghouse Rat is digging Tequila and Grapefruit at Cafe Van Kleef. For those of you unaware, tucked into the Uptown in Oakland, California lies the best bar this side of anywhere. Travelers there will find the largest collection of Peter Van Kleef art in the world, and on a night ending in the letter “y” you may also find Shannon Ellery Hubbell and the Boghouse Rat arguing about whether Road Warrior or Fury Road was a better movie.

Cafe Van Kleef squeezes fresh Texas ruby grapefruit for all its grapefruit cocktails and the tequila really brings out the flavor of the citrus in a way that neither gin nor vodka does so well. In order to minimize my time waiting in line, I just order a double, which comes in a pint glass garnished with a massive wedge of grapefruit. The drink tastes delicious, intoxicates, and fights scurvy. What’s not to love.

I am really enjoying Hitman: Season One this week. I’m hardly the most competent at the game yet (I’ve played for about 2 hours tops), but it’s fine because our gaming group (full of Lewton Bus and non-Lewton Bus writers) has a sincere camaraderie. We talk and laugh about our best hits and the goofy things we did wrong, all in a friendly environment where incompetency is seen as a stepping stone for skills – or for comedy. Either way, we all win.

This film is beautiful. It’s incredibly simple, a story of encounters between best friends who know that what they need from life they can only get from each other. It’s heartbreaking and utterly believable. There isn’t a false word in the screenplay, and the laughter and hurt that plays between Riley Keough and Jenna Malone is true. We need more of this sort of laser-focused, Chekovian character piece, foregrounding emotion where a lesser film relies on mechanics. This film speaks a language that masterful impressionists such as Wong Lar-Wai and Lynne Ramsay are fluent in, and that too few of us are able to hear. Empathy has a voice.2

Hitman is the type of game I feel like I’ve been searching for my whole gaming life. It’s entertaining and engrossing. Fun but not rage-worthy. Endlessly replayable and rewarding. Plus, despite it’s single-player system, it’s an absolute blast to share with friends, whether you’re filming your exploits for later dissection and derision (or most often, shared laughter) or just taking turns on a particularly difficult contract.

After falling in love with Blood Money last week, I’ve finally become engrossed in IO’s masterpiece of a game, the 2016 episodic adventures of Agent 47 and his silky-voiced handler. There’s nothing funnier to me than how gently motivational and wry Diana is over your com unit, or how after blowing someone up with an exploding camera or something equally hilarious will then turn into a melodramatic cinematic featuring nefarious figures. It’s all so wonderful.

Something we haven’t talked about yet between all our Digs for Hitman is one of it’s most crucial elements: Niels Bye Nelson’s exquisite score. Ably setting the scene no matter where you are, the music makes you feel like you’re part of a sweeping, epic interactive movie. There’s a piece of music that swells when you enter an evil scientist’s underground lair and every single time I’ve gone through that part of the mission it’s thrilled me equally.

Now, when is Spike Jonze going to make another full-length film? I really need one of those right now.

The combination of Ric Roman Waugh’s confident direction and a commanding leading performance from Nikolaj Coster-Waldau result in a thrilling genre exercise that also happens to work effectively as a poignant character study. It’s basically a tour of sorts throughout the most aspirational and horrific scenarios of the U.S., making it feel like a kick to the guts. Especially because of the dreadful sense of escalation built with all the decisions that take place after a life-changing mistake.

This is my first Civ game, so I went in without any preconceived notions and I can safely say thatt the game has blown me away.

Sean Bean does a stand-up job as the narrator. His northern baritone is perfect for reciting quotes from famous people throughout history, ranging from Shakespeare to Monty Python.

My favorite is when you unlock the Astrology science perk:

“I don’t believe in astrology; I’m a Sagittarius and we’re skeptical.”

That’s from Arthur C. Clarke, and Sean Bean’s deadpan narration makes the quote funnier than it should be.

I’ve been playing Civ VI  so much that I’ve been neglecting my real life responsibilities. Someone please stage an intervention before I put in a catheter so I don’t h ave to leave my computer.3

Filmstruck is a nice TV app that’s a good smorgasbord of TCM, Criterion, and other old flicks. It’s got stuff for the cinephile, stuff for the newbie, and stuff that’s just plain entertaining.

If you’re of my generation you probably remember the Heaven’s Gate suicides. You know that they killed themselves believing that a UFO was hidden in the tail of the Hale-Bopp Comet, and that it had come to take them home to Heaven.

But if you’re anything like me, that’s probably about where your knowledge stops. I was in High School when the cult members drank the proverbial Kool-Aid and, outside of assuming they were a bunch of nut jobs, didn’t give them much thought.

This podcast gives them a lot of thought, and humanizes them, while also not shying away from the fact that healthy happy people generally do not join a suicidal cult (fun fact: the cult had been around a lot longer than I knew, and was not suicidal to begin with – that came much, much later), and that this affected a lot of people profoundly.

It is a fascinating look into the lives of the people who founded and became a part of Heaven’s Gate that manages to avoid being overly judgmental or sentimental as it weaves its story.

Holy hell, that’s a lot of Digs! Not nearly enough digs about Hitman, though, I agree. So get on down to the comments and tell us what you love most about our Digs, Hitman, and what you’re digging this week. Probably Hitman, right? Yeah, it’s Hitman.

THERE WAS AN IDEA... Winning Wars With Niceness (and... Previous
Review: THE DEATH OF STALIN Next