An Interview With the Ladies of SKATE KITCHEN 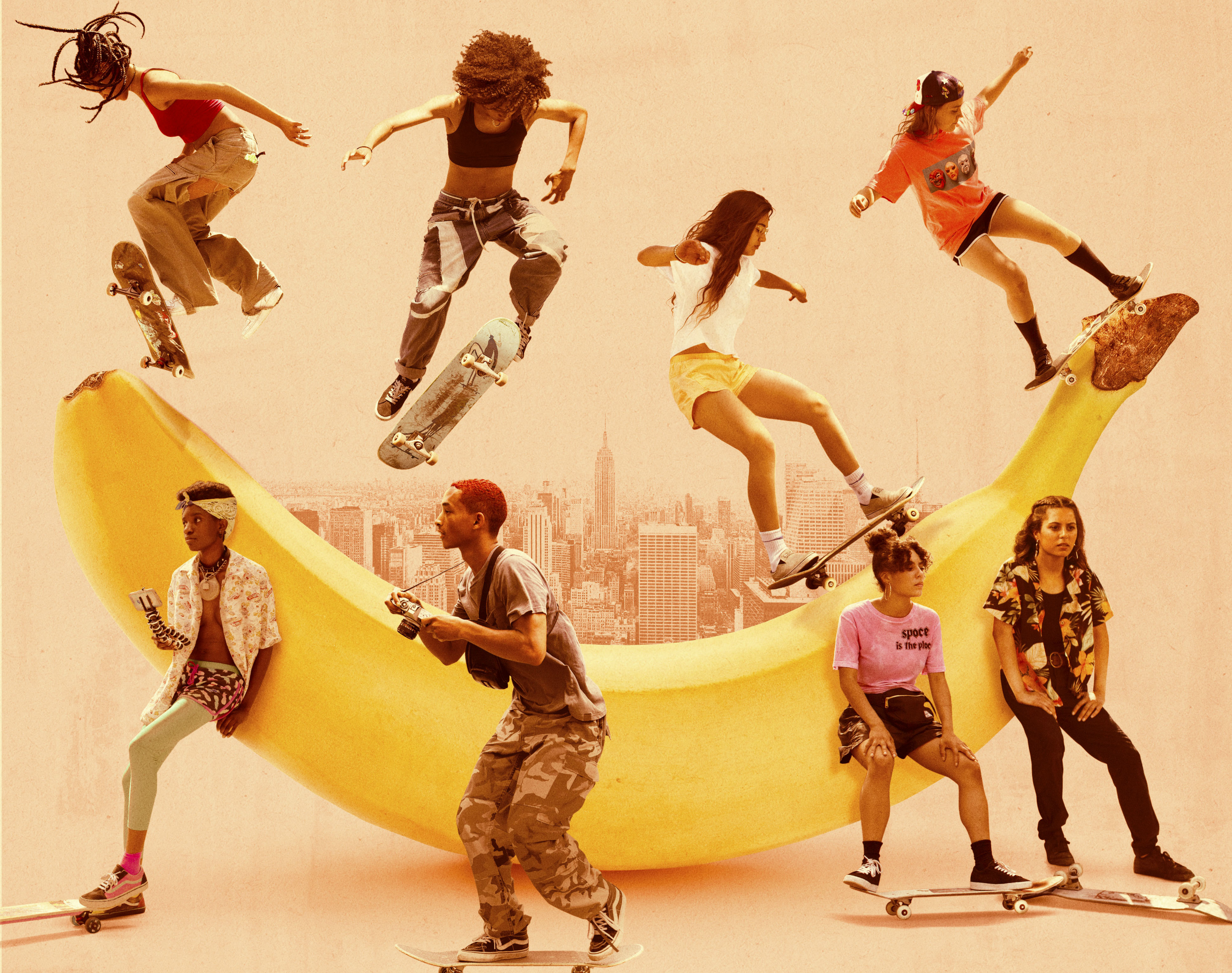 This summer is already chock full of quality releases big and small. One of the features being released this weekend that caught my attention way back in January during the Sundance Film Festival is the skate-punk coming of age tale Skate Kitchen. The film is the first narrative feature from acclaimed director Crystal Moselle, who gained prominence with her debut film The Wolfpack, a documentary about a group of brothers shut in under harsh parental control who raised themselves entirely on cinema.

Moselle’s familiarity with bringing true-life to film is used to great effect in this latest feature since, although a fictional tale, the primary stars of the movie are the real world all girl NYC-based skateboard collective known as The Skate Kitchen, playing reflections of their actual selves. Along with them comes a big boost of star power in the form of Jaden Smith, playing a potential love interest of the main character. Prior to attending a special premier event of the film, I got a chance to speak with The Skate Kitchen crew to ask how the project came about. Present at my interview were crew members Rachelle Vinberg, Dede Lovelace, Nina Moran, Abrina Adams, Jules & Brenn Lorenzo, and Ajani Russell.

Before we get into it, I actually want to let it be known that this interview was my first official press event as a film journalist. It was a nerve-racking prospect to begin with, but there was an extra amount of awkward energy since I came straight from my IT/Computer fundamentals certification course wearing full business attire to talk to a group of super cool teen/twenty-something skater chicks. I felt like a substitute teacher or high school guidance counselor talking to a group of at-risk youth. Thankfully, The Skate Kitchen ladies are super chill, extremely intelligent, professionally poised, and ready to take on the world in an even greater capacity. There are no doubt many negative preconceptions about skateboarders as troublemakers, which is something the film tackles head on. I am glad to say that my interview with The Skate Kitchen was a genuine pleasure, and I am grateful to have spent time conversing with a group of young women with such level heads on their shoulders and firm grasps on their goals. These are the kinds of young adults who give me a great sense of hope for our future.

VV: I’ve been away for a long time, 12 years of service overseas in places like Germany, Korea and Iraq. I’m also a native New Yorker, born in Brooklyn, raised in Queens, now living in the Bronx. Every time I’ve returned home from leave, I’ve marveled at how youth culture trends have changed, almost to the point of culture shock. One reason why I’m excited about your film Is that it’s something I’ve never seen before. Do you guys feel like you’re part of a radical movement at all, or does it all feel natural to you?

Rachelle: For me it definitely feels like a change because I remember growing up in Long Island, I didn’t skate with any girls, so now that I see girls all the time casually, it’s like “oh this is kinda different”. Also with the whole city thing, with it being a trend…..It feels like kind of a trend right now for girls to be skating but soon it’s going to be normal.

Dede: I still have a hard time trying to fathom and understand the impact we have as a collective, but I get reminded by not only Crystal and some of the girls, but people on the outside like younger girls and even guys. It still blows my mind, but it feels good to be part of something that’s really positive and changing things for the better.

VV: This is gonna be a big boost of exposure for you. Are you worried about, like in other grass roots underground movement, the capitalization and corporatization of your collective? Are you afraid of that, or do you hope to use it to your advantage?

Rachelle: I think that we’re trying to be as authentic as possible, to only do things that we like and things that feel authentic to our movement and our friend group. I think this all of this is great because in the end its going to inspire more girls to go out and skate when they see us.

VV: So, relating to authenticity…how was it like working with Jaden? You know, with him being a mega star with such a ‘unique lineage’…

Rachelle: …But he also skates. For the movie. He’s a skater, its not like he’s some actor trying to be one. He’s been skating since he was six. So its pretty cool, its real.

VV: The director is famous for her documentary about boys who live through movies in. I’m curious to know how much of your own lives is put to screen in this film? How did the process work of putting the narrative together with your real-life experiences, and how much input did you have in the script?

Ajani: It was a very collaborative process working with Crystal. We hung out with her a year before we filmed, so in that whole time we were hanging out she would take down notes on conversations we would have or experiences we’d have with her. So these are all thing that happened in real life…except for Jaden Smith showing up and messing up our friendship of course. We don’t fight over boys. It was a closely collaborative experience working on the script as well. Some of us would go through and change the slang sometimes. While we were filming, we would act out the scene as written in the script; if it didn’t feel right, we would say “Crystal, this would never happen in real life” and she would be very open to changing those things and listening to our ideas.

VV: How did Crystal even meet you guys in the first place? Do you guys have a manager or something?

Rachelle: No no, not at all. Me and Nina (Moran) were on the train and she saw us with our skateboards and she asked, “are there more of you?” and then we and the other girls met up.

Review: THE MEG Previous
Westerns 101 — The Essentials Next

An Interview With the Ladies of SKATE KITCHEN