Oscar Week: Looking Back at a Decade of Best Original Song 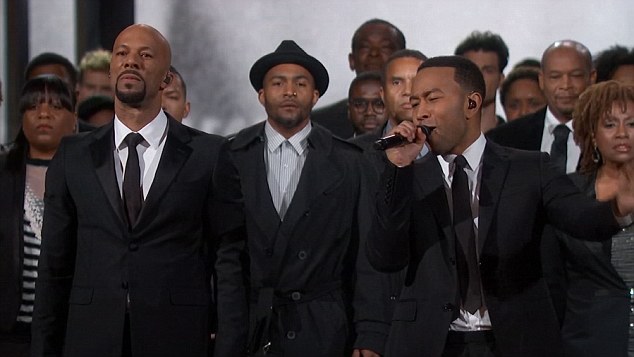 Of the twenty-four competitive categories the Academy will recognize on Sunday, perhaps none is as captivating as the award for Best Original Song. From the star studded pedigree of “Can’t Stop the Feeling!” and “The Empty Chair” (Justin Timberlake and Sting, respectively), to “How Far I’ll Go” and the potential history making EGOT for Lin-Manuel Miranda, and of course “City of Stars” and “Audition (The Fools Who Dream)” from awards juggernaut La La Land, the category is stacked top-to-bottom with songs that, in any other year, would be a shoe-in for the award. Regardless of which song wins this weekend (I’d put my money on “City of Stars”), it will be fascinating to see how the judgement of history will treat it, given the categories incredibly varied past.

That isn’t to say Best Original Song is an automatic death knell or a perfect indicator of future revilement –far from it. Songs such as “Lose Yourself” by Eminem and “Theme from Shaft” by Isaac Hayes prove that a winner can truly go down as one of the greatest songs ever made. Sadly, however, most songs suffer either from being a mediocre offering by a great artist (“Streets of Philadelphia” by Bruce Springsteen or “Things Have Changed” by Bob Dylan) or songs that are impossible to enjoy divorced from the film (“Into the West” from Lord of the Rings: The Return of the King immediately comes to mind). Others, on the other hand, are just straight up bad, leaving one to wonder if the academy knows what a song even is (“The Morning After” being one of the worst songs ever written).

With that said, let’s take a quick look at the past ten winners and see how they stack up.

The only thing that made Sam Smith’s mewling theme to Spectre remotely tolerable in the theaters was the completely bizarre octopus tentacle erotica that the producers somehow okayed for the title credits. Without hyperbole, Smith’s “The Writings on the Wall” could be the worst Bond theme ever, and easily is the worst of the Daniel Craig era. It’s just a mess of a composition, with crescendos building and then ultimately falling flat, with the only thing remarkable being Smith’s overuse of his famous falsetto. It’s easily the worst of the past ten winners.

How on Earth does Randy Newman have two Oscars? Why does Pixar keep hiring him? Why does this song grate me so? Sorry, but “We Belong Together” is just bad and anyone who voted for this song should be shamed with a scarlet RN on their apparel for the rest of their lives. Everything is so phony, from the horns, to the upbeat dancing nonsense of a rhythm, to Newman’s atrocious vocals. Everything about this is hot garbage.

8. “I Need to Wake Up,” An Inconvenient Truth

Now is where we get into the “not technically bad, but definitely didn’t deserve to win” portion of our list. Melissa Etheridge’s ode to not destroying our planet for fleeting monetary gains is a nice gesture, but three songs from Dreamgirls being nominated and not a single one winning is one of the biggest voting disasters of Oscar history. Every one of those songs is better than “I Need to Wake Up”. “I Need to Wake Up” is the definition of a “fine” song. Not good, not great, and remarkably unmemorable.

Slumdog Millionaire isn’t a good movie, and is one of the worst Best Picture winners of the 21st century. “Jai Ho”, the film’s central musical number, manages to be the one memorable part of the film. While the film itself feels like homage to Bollywood by someone who has only seen the previews for a Bollywood film, A.R. Rahman’s composition for “Jai Ho” is a breath of fresh air in a film that often feels devoid of any reason to exist.  While it suffers from some overproduction, it’s a fun song that unfortunately has its legacy tied to a dumpster fire.

Ryan Bingham and T Bone Burnett did something incredible with “The Weary Kind” – made me enjoy more than a few seconds of a country song. Recorded in a minimalist fashion, it’s a song that makes every note and every decibel count, tying an intense amount of emotion into what, on paper, is an unremarkable song that would run over the end-credits of a mediocre awards season release. Instead, we’re treated to a painfully harrowing song that is deserving of award recognition.

Adele is wonderful; I think we can all agree on that. I could listen to her sing the phonebook. When she was announced to be performing the theme to the 23rd entry to the Bond series, I was incredibly excited, as was seemingly the entire rest of the western world. What we ended up with was an incredibly solid theme, all things considered. It’s lyrically over reliant on using the title of the film (I don’t need to be reminded that I’m watching a film called Skyfall), but the music is a haunting soundscape that, combined with Adele’s unique vocal delivery and range, makes it the best Bond theme of the Craig era and one of the most iconic of the entire series.

Bret McKenzie of Flight of the Conchords won an Oscar for a Muppet movie. While that sentence in and of itself is enough for me to be on board with this song, the fact that “Man or Muppet” is a delightful soft-rock ballad dedicated to the question of identity pushes it into the upper-echelon of Best Original Song winners. Like much of Flight of the Conchords’ work, “Man or Muppet” works on both a comedic and a musical level, providing a complete experience unlike any of the other winners of the past ten years.

And now we get into what I’ll call the “All-Timers”. John Legend is one of the greatest artists working in the music industry today, combining a unique, silky smooth voice with some of the best melodic writing in the business. Common is one of the best lyricists and rappers to ever live, bringing both intelligence and power to everything he touches. Together, these two are unstoppable, with “Glory” working as the magnum opus of both these men’s careers. It’s a remarkable song, tying in topical themes and events to the thematic and historical importance of the Selma marches and MLK’s legacy. Just look at the emotions at the end of the clip above and you’ll see just how powerful this song truly is.

Kristen Anderson-Lopez and EGOT winner Robert Lopez’s “Let it Go” is the most iconic Oscar winning song since probably “My Heart Will Go On”. If you asked 100 people if they could sing the chorus, you’d maybe find one or two that couldn’t do it – It’s reached that level of saturation into our culture. Frozen itself is a remarkable achievement, a subversive, populist film about the power of familial love and “Let it Go” provides an anthemic spine that ties the film together. In addition, the fact that a Disney film has an unabashedly pro-LGBT song in one of its animated films, without it feeling shoehorned or clumsy, is another masterstroke by Kristen Anderson-Lopez and Robert Lopez. If it hadn’t been for my undying love of our next song, “Let it Go” would have been a lock for the #1 spot.

This song continues to wreck me nearly ten years after the fact. It’s a song that I unabashedly serenaded my now-wife with when we were early in our courtship, and I have no regrets about that. Written and performed by stars Glen Hansard & Markéta Irglová , “Falling Slowly” is an ode to love lost and gained filtered through the sweet harmonies of its singers. The song is a slow build, featuring a simmering expansion from a solo acoustic guitar, a piano, and vocalists which comes to an eventual full orchestra accompaniment. It’s a relatively simple song, centered around a three chord progression in the key of C major, which allows the focus to be centered on the film’s stars rather than the instrumentation given the song is performed in the first key scene in the pair’s relationship. Once is the best film musical of the 21st Century, and “Falling Slowly” is one of the largest reasons behind that.