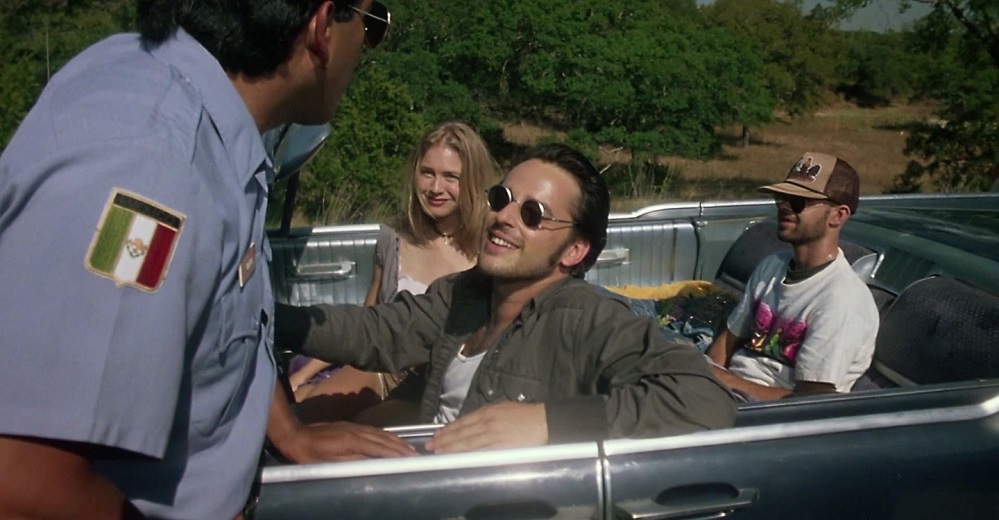 Hi everyone, it’s Kevin again. I totally didn’t forget to do show notes last week/earlier this week. I’m merely fashionably late this time. Which is unfortunate, because this is another great episode, this time with special guest, filmmaker and friend of the show Jason Horton! We all got together to talk the C.M. Talkington crime film Love and a .45.

This movie low-key ruled. It’s reputation as a Tarantino knockoff — it came out the same year as Pulp Fiction and was made on the heels of Reservoir Dogs — is extremely unfair given it’s clear Lynchian and Linklater-esque touches that are so woven into the fabric of a getaway/road trip film in the vein of Wild at Heart or Badlands. It’s Talkington’s first and only narrative feature, which is a real shame because it’s so effortlessly cool and well directed top to bottom. It also stars a pre-fame Renée Zellweger, which was kinda wild to witness her beginnings knowing she’s go on to be a 4-time Golden Globe and 2-time Academy Award winner. This makes something insane like 12 good films in a row, which is a streak that desperately needs to end.1

We also briefly discuss Jason’s other picks, which were the Albert Pyun/Andrew Dice Clay film Brainsmasher: A Love Story, John Woo’s The Killer, Walter Hill’s Southern Comfort, William Friedkin’s Bug, and the 2013 remake of The Evil Dead. Jason also updates us on what he’s been up to of late, including how things have rapidly changed in the industry in terms of independent film distribution. He’s also been working on a series of videos that discuss that same subject. Jason has been working for nearly two decades in the independent film industry, and he’s got a lot of insight that is fascinating to listen to.

As usual, we do more than just interview our guest and talk Love and a .45. The film stars the one and only Jeffrey Combs, which leads yours truly to nerd the hell out on the man’s extensive career in Star Trek. Ryan gets an origin story about his absolute hatred of camping, which we’ve decided we’re going to turn into a Joker-style film. Shannon and Jason also discuss their start working together in film, including the most important piece of criticism they ever received: “Why not werewolves?”

It was a lot of fun having Jason on and watching this film, which I had never even heard of before it was chosen by fate. Apparently the ways of the Cube are mysteriously working to educate. As always, thank you for listening and please like, subscribe, rate and review our show on whatever podcasting platform you’re on. We’ll see you soon with not only episode 15, but also a special Ennio Morricone tribute episode that we’re all extremely excited for.