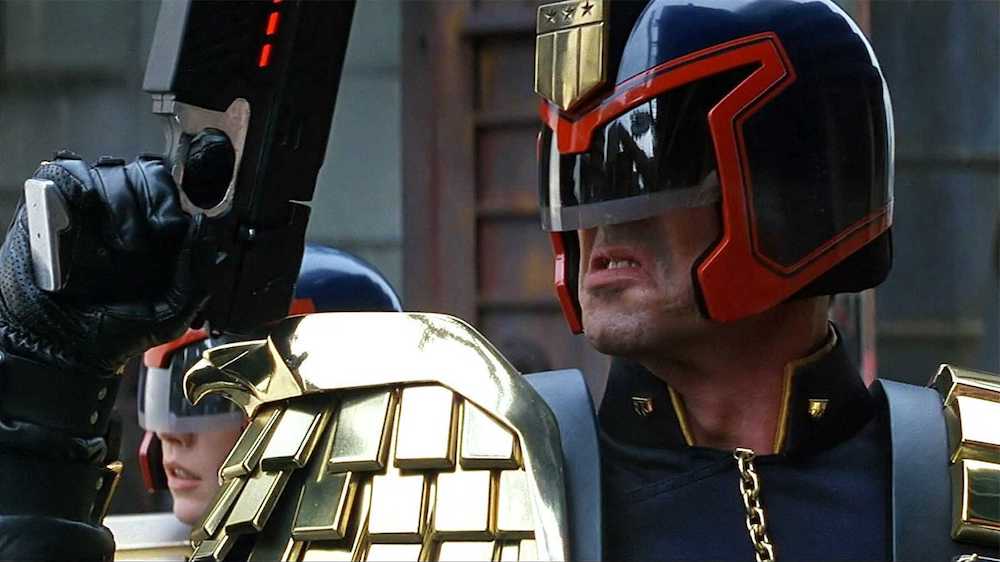 This week, the crime was podcasting. The sentence was 1995’s Sylvester Stallone vehicle (not the Lawmaster) Judge Dredd, directed by Danny Cannon.

How did this happen?

I blame Kevin. See, he started us off by pulling a theme, which turned out to be Sylvester Stallone movies. He picked Bruce Malmuth’s 1981 buddy-noir Nighthawks, co-starring Rutger Hauer, and followed it up with Over The Top, which I was astonished to hear he’d never seen, since we’ve both seen just about every piece of shit Stallone made. I just couldn’t let this theme go without adding a button, so I wanted to demonstrate Stallone’s need to always follow up a total success with a dumpster fire version of that success. So I picked 1993’s futuristic sci-fi actioner Demolition Man (also featuring Rob Schneider), and of course Judge Dredd, the worse version of Demolition Man. Shannon wasn’t paying attention, so he ignored this very stupid bit, which is absolutely his Brand. He came to the Cube with 1989 underwater sci-fi classic1 The Abyss, directed by James Cameron, and the Assembly Cut of David Fincher’s Alien 3.

The surprise of the episode is that we were joined by friend of the show, Arthur Wyatt2! Art was kind enough to accept a last-minute invitation to come on and discuss this flawed and foolish film that was clearly sabotaged by its star, but that we somehow can’t stop liking. It’s a movie that gets progressively worse the more Stallone is in it, but Danny Cannon creates such an evocative palette with his world-building that it’s impossible for Stallone and Schneider to strangle the movie’s charms, completely. Honestly, we had a blast with this one, and while it won’t be any time soon, I know I’ll be watching this one again.

The Lewton Bus Podcast Network · Cinema Chance Cube, Ep 19: You Didn’t Have a Concussion, the Movie Did