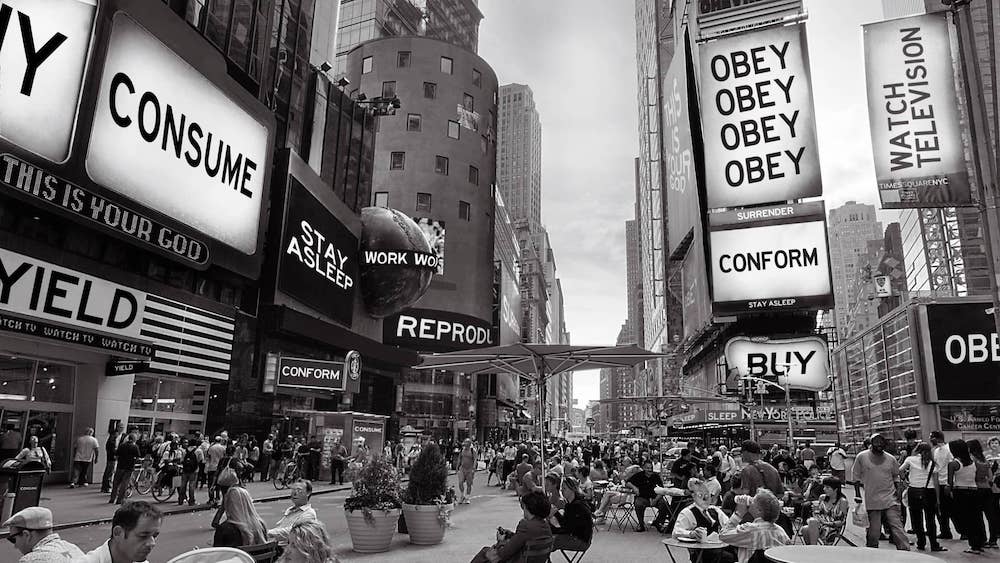 Wow! 20 episodes in and I can’t think of a better, more pertinent movie for us to sit down to than John Carpenter’s 1988 Sci-Fi/Actioner/polemic/scream of horrified rage, They Live.

They Live is a film that has mostly been absorbed by the culture and blogosphere via memes and tired jokes, rather than, say, the engaging of cerebral matter or critical analysis (with some notable exception). Essentially, people know the iconography, but they haven’t usually dug into the text. No shame! We did you a favor and over the course of 2+ hours of analysis, deconstruction, contextualizing, goofing, soap-box shouting, trivia, tangents, and dumbassery, I think we’ve pretty much put the legacy of They Live to bed. This is a great discussion, about one of those movies that has sort of never had its day in court, but is due for a big reappraisal, especially given the tenuous and awful place we find ourselves in the dog days of 2020.

Before we dug in, Fate ushered us into Carpenter’s hands against a cube stacked with silliness. Kevin, never tired of needling me, brought 2 features by Cinema’s Greatest Villain Edward Norton: Rom-Com misfire Keeping The Faith and the bafflingly ill-advised whiff from the three-point line at a prestige picture, Motherless Brooklyn. For my own part, I peeked at the fact that Shannon had nominated both this movie and apparent naval masterpiece Master and Commander: The Far Side of the World1, and decided to make my theme count by choosing lesser-loved Carpenter films Memoirs of an Invisible Man and Ghosts of Mars.

Also, we talked about Kevin’s fatherly foibles, Kanye’s dumb fish fillet shoes, and a bunch of other ridiculousness. This episode is a doozy, and we seriously thank you all for listening and getting us to 20 episodes.

I won2 the Reload this round, so get ready because next week is gonna be a blast.