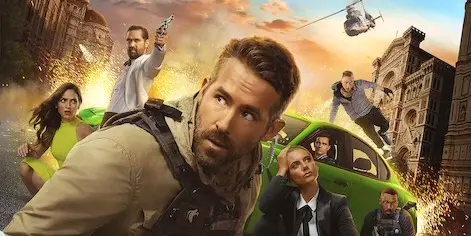 In the middle of watching 6 Underground, I began to entertain the possibility that perhaps I should have been killed in Iraq or Afghanistan.

I saw 6 Underground at the IPic theaters in South Street seaport/ Fulton Mall in New York City. The venue has a chic nightclub-like atmosphere, and I was pleasantly surprised to see the almost entirely Black/African American staff, all of whom displayed the utmost courtesy and professionalism in the goal of creating a comfortable movie-going experience. After my experience with Michael Bay’s latest film, I ruminated on the fact that we were likely standing on top of the decaying remains of our ancestors,  the enslaved Africans brought here on ships from the centuries old slave trade that had occurred on these very grounds.

After the film’s first act barrage of action, I got up several times  to get drinks and food, unconcerned about missing any important plot points or action beats. At one point I had ordered sliders and a flight of beer, really leaning into the decadence of the entire situation. It turns out that during one of my concession stand excursions, I missed the centerpiece action sequence involving a high-powered magnetic device. My friends were slightly aghast at why I chose to miss such a pivotal moment in the story, one that will likely be a highpoint in Bay’s oeuvre. Already several beers in, I simply snorted “Fuck it, I’ll see what I missed at home.” I had planned to return home and cue up the scene on Netflix, but in the end it doesn’t matter. No one cares if I saw it or not. No one cares that I paid so much for a movie already showing on my television. No one cares if I did good or bad with my time here on earth.

6 Underground feels like a refutation of the very concept of cinema itself. Most other film critics would write that sentence as a disdainfully haughty way of saying the film is bad. I mean it here very specifically like a type of mad scientist’s experiment; not so much a deconstruction of film, but more like a vivisection of blockbusters and a two-way psychoanalytical probe into what we expect out of them. In certain points the vivisection feels literal, as Bay revels in gore and shots that linger just a moment longer than you would normally see in action films, giving your brain that extra instant to comprehend the carnage before the next moving image blazes through your retinas at break-neck speeds.

Even now, I have great trouble remembering the plot due to its disjointed nature, though it’s almost as if I can feel the director making fun of me for the fools errand of trying to make sense of his or any big budget blockbuster. Ryan Reynolds stars as “One” a secretive billionaire genius who assembles a team of talented individuals to take down a dangerous world leader.  6 Underground is a whirlwind collision of the Ocean’s heist films, the Fast & Furious franchise, the Mission: Impossible series, Vin Diesel’s XXX saga, and The A-Team. I have always considered Michael Bay the Aristotle to Tony Scott’s Plato of bombastic action cinema; there is great respect paid to the fallen master in this film, but I also sensed the inspiration of his brother Ridley’s penchant for high level geopolitical melodrama. The supporting cast feels almost like it was selected via names drawn out of a hat, but that haphazard chemistry works to the benefit of such a frenetic movie. Special mention should go to Corey Hawkins who plays a former special forces operative on the edge of death who finds new life with “The Ghosts.” In character and meta-textually with his acting ability, he steps up to the task of providing a direct challenge to Ryan Reynolds’ ego and his character’s strict operating procedures.

Much has been said about the overt misanthropy of Michael Bay’s filmography. That is usually the extent of the discussion, but this abandons the more fascinating riddle of what he actually does care about. His noted love for animals and wildlife aside, one wonders if there is still something fascinating about the human condition that drives him to make such unique populist art. “Fambly” has been the core of Fast & Furious, while the dedication to duty seems to be what drives Ethan Hunt to defy death in each of his Impossible Missions. Bay’s films also touch on family and duty to varying degrees, but his films seem more concisely focused on the fraternity & kinship born of a common struggle, unity through purpose, the completion of the mission above the individual.  Those concepts coagulate into the strange concoction that is 6 Underground; it evokes the strange paradox of fluid ethics that are rigidly adhered to. If I could imagine a child trying to work through this morality, it might sound something like this:

”In 6 Underground, might makes right, but we should still strive to do what’s right. When the mighty don’t live rightly, we must unite with all our might to try and set things right, and through the honor of the fight we will be in the right.”

That would sound incredibly stupid… if it wasn’t the basic moral code of the United States Armed Forces that I lived by for most of my adult life. I suppose that at the end of the day, this morality is more honest than the messages we see in any typical superhero film or four-quadrant blockbusters that promulgate the status quo and binary thinking. Keep in mind, all this comes to bear in a film that has direct allusions to the Assad Regime’s slaughter of the Syrian people with chemical weapons and a reenactment of Libyan dictator Muammar al-Gaddafi’s summary execution.

And so, I sat in gaudy luxury, cramming my gullet with meat and beer as I blurted profanities at the screen. The master of cinematic excess with his latest mad genius project, daring me to kill my own body, my own mind and my own soul in the name of entertainment. Although, perhaps it is I who will have the last laugh, since all those elements of my being have already been in various stages of decay. Some might love for me to say that this kind of schizophrenic film making is the death of cinema and a detriment to our collective cultural consciousness, but that comes with the implication that cinema and our culture is something worth saving in the first place. In the chain of any and every form of large-scale mass media and the entertainment industry, someone will be exploited. Moreover, I of all people have no grounds to proselytize about the morality of cinema when I had a hand in the deaths of thousands. 6 Underground purports that even if we can’t change the world, “maybe we can make it a little less shitty.” That’s more than fair and far more than a lot of us deserve.

Review: JUMANJI: THE NEXT LEVEL Previous
Review: STAR WARS: THE RISE OF SKYWALKER Next