Review: A WRINKLE IN TIME

Disney's Newest is Not Gone, but Enfolded 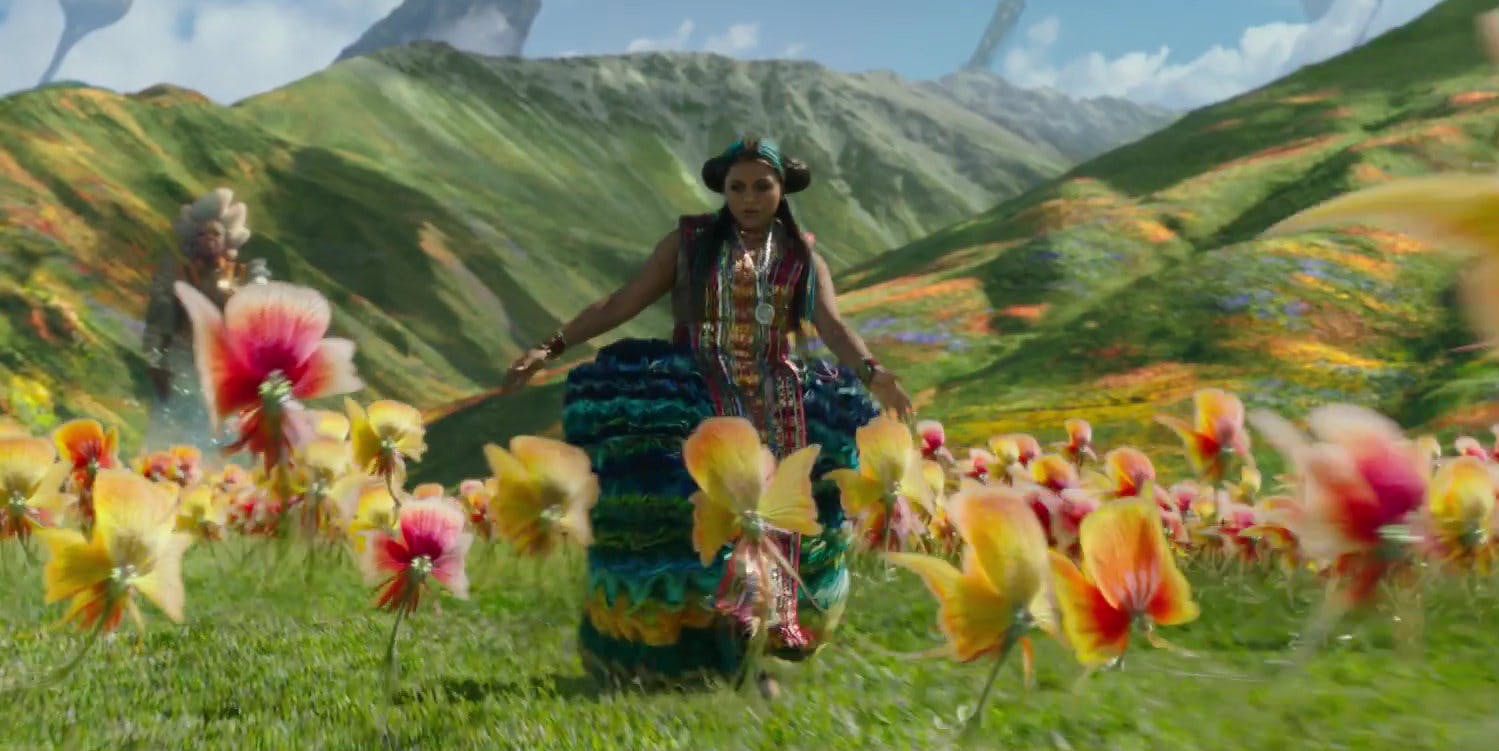 I have never read the book A Wrinkle In Time, by Madeleine L’Engle. I know that it is a beloved story for multiple generations, and I know that, like the works of C.S. Lewis, its messages have been both celebrated and decried by different aspects of the literary world. Beyond these facts, I have no connection with the work other than having been excited and intrigued as each new report of its production and casting was announced. The idea of a big time Disney effects film being handed to Ava DuVernay, starring a diverse cast and based on a beloved story seemed to have absolutely everything going for it, despite the fact that I couldn’t tell you at all what the book was actually about. After having seen the finished result, I have to confess I’d still struggle to do so with any degree of certainty. It’s a film that says things that people need to hear, but does so without much conviction or coherence. Simultaneously big and sweeping, but small and flat, Disney’s A Wrinkle In Time is sort of a confounding head-scratcher. One I’m still wrestling with.

Amid the aimlessness, beautiful and inspired scenes glow through, like Meg’s ‘tessering’

In barest terms, A Wrinkle In Time is the story of Meg Murry (Storm Reid), and her journey through the cosmos to find her missing father (Chris Pine, doing admirable work in a story that does not do him any favors), who vanished four years ago after seemingly cracking the code to shipless interstellar travel. Storm Reid is obviously a talented young actor, and does her best to balance the A and B plots of rescuing her missing and imperiled family members and struggling to come to terms with her self-doubt and sense of worth. Haunted by her father’s mysterious disappearance, Meg has become a sullen and detached teen, ostracized by her peers for her closed-off nature and (supposedly) for the oddness of her strangely adult younger brother, Charles Wallace (Deric McCabe), a walking plot contrivance. Meg exhibits discipline problems, hostility, and teen-agedness. I’d like to say that hijinks ensue, but regrettably, they largely do not. Meg is bullied by her teenage neighbor, and vaguely interacted with by an empty thirst-hole named Calvin (Levi Miller). While navigating the drama of her life, Meg’s family is visited by the first of three… beings? Fairies? To be honest, I’m lost on this point. Either way, Ms. Whatsit (an endlessly negging Reese Witherspoon, on loan from a nap somewhere) appears in Meg’s house one night to introduce some plot weirdness, and set Meg on her journey to find her father (but actually just to hang with Charles Wallace, whom she finds much cooler than Meg).

Reese Witherspoon’s Whatsit, despite getting the best (only?) creature effect in the film, seems uninspired and dull for most of the running time.

While you would expect the inclusion of the fantastical elements would jumpstart the narrative with some momentum, this is actually when a lot of the film’s problems begin to manifest fully. Whatsit’s vagueness about her motives and intent while introducing the key concepts and other magic-ladies of the movie might signify a deepening mystery in a different story. Here, they’re given neither weight or danger, and simply come off as story necessities. We hear and see many things about the use of tesseracts to fold time and space, but learn nothing of them.

In fact, the very nature of time itself is so mutable in this film as to render its undoing completely moot. We move through the life events of these characters, barely touching on them, and are left grasping for a foothold in their lived experiences. During the more mundane portions of the story, things move in an amiably aimless, but earnest pace, but it works more than it doesn’t. Once we catch up to the present and the more mystic-scientific plot, these issues persist, though. Things just sort of happen. And although these things are often beautifully photographed and impressively designed on paper, they’re largely unchoreographed. Events just kind of move along, unconnected to anything but a sort of dream logic, rooted in the emotional journey of Meg but mostly untethered to it, as well. A Wrinkle In Time also makes the conscious choice to insert modern songs into interstitial scenes, seemingly without purpose, and with little in the way of editing or directorial compliment. There’s not much difference in execution between a scene where Chris Pine informs Meg that she can expect a new baby brother, and a scene where she must work to learn the secrets of the universe with that same brother from an oddball medium (Zach Galifinakis, deployed in a totally bizarre fashion as a mystic therapist). And this is a problem.

Ava DuVernay is clearly a talented and singular voice. Her selection to make this film was a cause for excitement from the moment it was announced, and for good reason. There are about three or four beautifully constructed scenes in this film that have an assuredness in emotional storytelling that should not be understated. A scene where we are granted a glimpse into the lives of Meg’s and Calvin’s tormentors is a standout, where we’re made to understand that the very force imprisoning Meg’s father is responsible for influencing the darkness in mankind’s hearts that causes them to lash out in jealousy and fear and self-loathing, mirroring the inner emotional life of Meg. There are beautiful conceptual constructs created on the planet of the evil force known as The It that demonstrate the hegemony of humanity’s joy in its own suffering and fear, represented by our flight reaction toward normalcy and conformity. There’s thought and care to be found in some of the conceptualization here that frankly baffles me in its flat execution. The storytelling in this film lies at a watermark of perfunctory until suddenly it doesn’t, and you’re treated to vibrant scenes that convey a purpose and focus that is bewildering, but welcome.

Oprah Winfrey’s Which hovers literally over most of the film’s proceedings. Aloof, and seemingly composited in from a soundstage on a lunch break.

This extends to the supporting performances in the film. While Mindy Kaling’s Who offers a bright point of engagement in the ranks of the Ancient Magic Ladies, Winfrey and Witherspoon struggle mightily to find some semblance of purpose in their portrayals. Oprah, specifically, seems utterly disconnected from the goings-on in all but the briefest of moments, often seeming as if she never once shared physical space with any of the other performers. Witherspoon, ostensibly the quirkiest and funnest Magic Lady on paper, seems to be both desperately clawing at a character while sleepwalking through her scenes. Chris Pine fares no better, as this film seems to have no idea what it actually thinks about his character, despite his best efforts to ground him in some manner of earnest misguided obsession. One starts to consider the fact that the performances themselves are less to blame than the editing. If I had to put my finger on what’s not working, it’s that the performances seem to consist wholly of first takes, stitched together with pre-vis sequences and the aforementioned three to four excellent conceptual scenes, but sometimes missing a keen eye on character arc. Stretches of the film carry little weight on their own, and then are punctuated by genuinely affecting moments that turn out to be all too brief. If I were to point to a film that attempts the same level of off-kilter dream logic storytelling to better effect it would be 2005s Mirrormask. A film that trades in a lot of the same YA angst and self-discovery, but wholly embraces its own oddments and ethereal nature.

The greatest compliment I can lay at the feet of A Wrinkle In Time is that it embraces a style of storytelling that is both emotional and cerebral. The film desperately wants to connect its young audience with the thinkers and philosophers who have preached the gospel of self-acceptance, and helped instill the virtue of defeating the darkness with love, in an earnest and beautiful way. Its biggest impediment in this arena is the fact that it cannot muster the connective tissue to help this stuff properly land throughout, and we’re left with the impression that we’ve seen the world’s shortest workprint, two drafts away from a more effective, impactful film. Even in its troughs, it never outstays its welcome. But A Wrinkle In Time also never quite rises to the heights glimpsed through the clouds on the crests. I think time will find an audience for this film that desperately needs it, even as I find myself wishing for the better film I see within it.

Jon Favreau to Write and Produce a New STAR WARS TV Series Previous
THERE WAS AN IDEA... Winning Wars With Niceness (and... Next