A Caveboy and His Dog 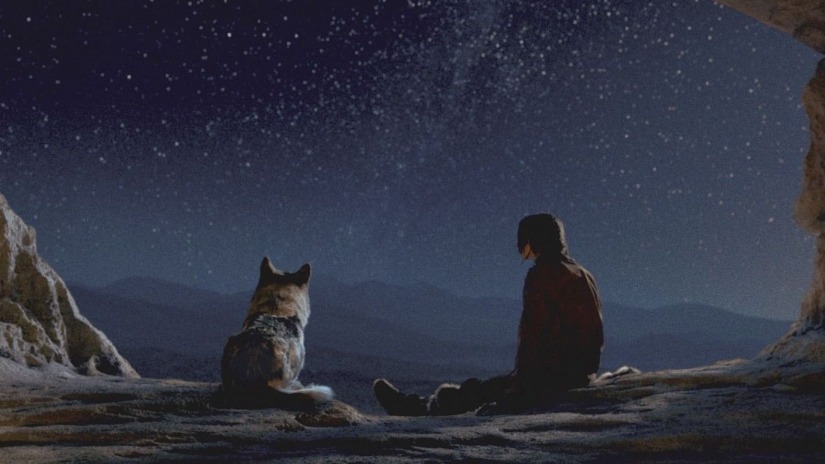 As Lewton Bus’ Senior Dinosaur Correspondent,1 I felt obligated to write our review of the latest anthropology-themed cinematic effort from Albert Hughes (Menace II Society), Alpha. From the marketing it looked genuinely awful, and like an absurdly simplistic just-so story version of the domestication of dogs. I’m taking one for the team here, I thought. It turns out I was half right. It is an incredibly simplistic depiction of the domestication of dogs, but that actually furthers the film’s aims. It is also not awful. Not in the least.

We start off with a scene that seems really silly, but totally works in context. 20,000 years ago, a Cro-Magnon hunting party sneaks up on a herd of steppe bison. They find their moment, and… charge the herd, screaming like a war party. The bison for their part actually turn toward the human hunters and charge them, like prey animals obviously do. The two groups of mammals run at each other like armies in a Lord of the Rings movie. I was cringing watching this moment. But again: context.

The “run at the extinct European megafauna” gambit doesn’t end up going as planned, and the teenage Keda (Let Me In’s Kodi Smit-McPhee) ends up horn-tossed off a cliff by a bull. His crew of caveman hunters, along with his mourning, tribal chief father, Tau (Jóhannes Haukur Jóhannesson), believe him to have perished. However, spoiler alert, after a harrowing dangle from the cliff face that left my acrophic butt clenched, he survives. Utterly alone during his first venture away from home, he scrambles to survive. He hasn’t even learned how to properly start a campfire yet.

What follows is, on paper, a pretty standard coming of age story mixed with a pretty standard man-versus-nature tale of survival, but it’s a tad more complicated than that. Complicated by Keda’s encounter with a pack of voracious wolves. He manages to escape, but not without injuring one of the wolves (played by a very talented pupper named Chuck). Faced with the prospect of killing the poor thing, he decides to go against his father’s “kill so we may live” philosophy and nurses it back to health.

Again, this is an incredibly simplistic depiction of domestication. Despite some initial mistrust, the wolf goes from brutal pack hunter to Very Good Dog2 in what seems to be a matter of days, going so far as to invent certain trained dog behaviors on its own. Silly, right? It is.

It also works, and it defused one of my fears about the film. Based on an erroneous understanding of wolf power dynamics, now dismissed even by its primary proponent, the term “alpha” in this context has been appropriated by a variety of men’s rights activists and men’s rights activist-adjacent doofuses as a description of what they want out of themselves: a dominating and toxic masculinity. The title had me deeply concerned, and I expected the coming of age narrative to reflect that same type of mindset, as articulated (somewhat softly) by Keda’s own father. I expected the story of the wolf’s domestication to be one of Keda asserting his own dominance over the animal. Instead, it’s a story sparked by the kindness of Keda, a boy described by his mother as someone who leads with his heart, not with a spear. It’s a story that’s furthered by the wolf3 actually taking initiative. Keda doesn’t wield his magical alpha powers over Alpha to bring the wolf to heel, because it’s not necessary. Is it realistic? Not necessarily. But this story of two new friends surviving through cooperation doesn’t need realism.

It doesn’t need realism because it’s a myth.4 A myth heightened by cliff-dangling and bison battles and heavily anthropomorphized wolves. It is a just-so story about the domestication of dogs. It’s perhaps part of an oral tradition, traded over the campfires of Keda’s descendants, that explains how man’s best friend got to be that way. Was the reality more complex and chaotic? No doubt. But Alpha is the kind of tale we tell ourselves when faced with a world that is complex and chaotic, and those kinds of tales serve a purpose. There’s a reveal near the end that, while small scale in a literal sense, feels epic in its own way. It’s assuredly nonsense scientifically, but it got me a bit weepy and made me want to track down the nearest dog and give the bugger a big hug. And I’m more of a cat person.

All the cats we meet in this movie are total jerks, by the way. So, you know, there’s your realism right there.

The movie as a whole is beautifully shot, mostly naturalistic but with regular, well-chosen bits of flare. There’s a shot involving a frozen lake that is stylized to a comic book level, and it’s really effective and breathtaking. Literally.

The cast, lead by Smit-McPhee, who is forced to interact with a nonverbal co-star for the bulk of the film, is excellent. The humans speak in an invented language called “Beama,” constructed by linguistic anthropologist Dr. Christine Schreyer based on what we know about the “proto” languages from around that era and region.5 It must have been a challenge for these actors to craft performances around a language that literally nobody has spoken before, but they all pull it off quite well. The language is on its own an achievement, and it’s pretty gutsy for filmmakers to make it central to an $80 million Hollywood production. I suspect the subtitles alone may be a barrier to entry for a lot of audiences, which is a shame.

Also a barrier to entry and a crying shame is the awful marketing it has been given. Most of the people I’ve mentioned it to, outside of my film nerd circles, have not even heard of Alpha, and the trailers have left those few who have with the impression that it’s a big budget Hallmark movie that happens to feature woolly rhinos.6 Is it heartwarming? Yes, but it is not treacly. Is it inspirational? Yes, but it is not preachy. Will it make you misty? Probably, if you’re a big old softy like me, but it earns it.

Alpha is a thoroughly enjoyable piece of modern myth-making, and it deserves to find an audience, ineptness of the studio be damned.