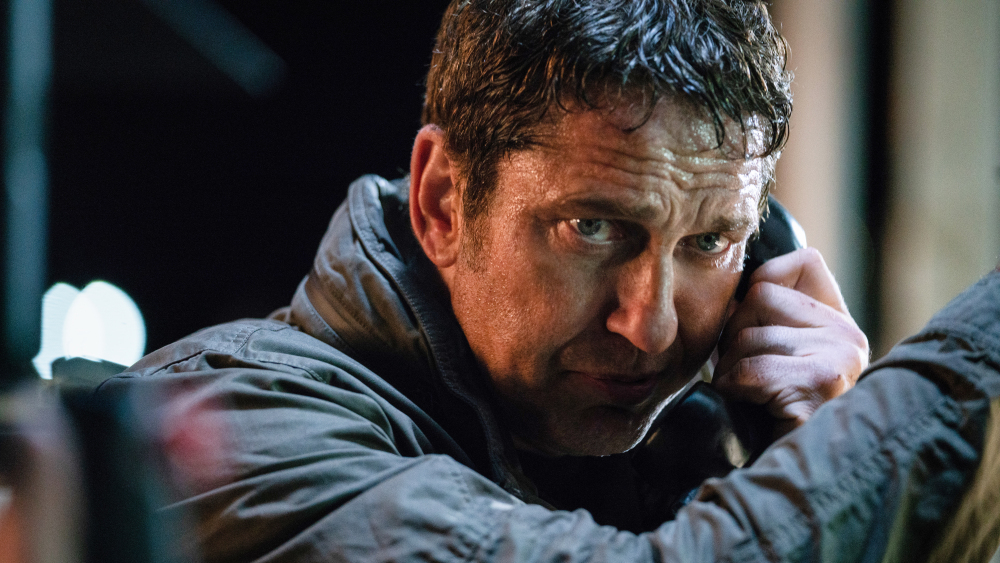 The Has Fallen movies are a strange beast. They’re remarkably chincy productions, with each one featuring a handful of scenes that have sub-90s-DTV-level action and visual effects. They’re not particularly well crafted or shot, and the writing is typically even more low-rent. They’re also psychotic American power fantasies that solely exist for Gerard Butler (a producer and clearly these films’ driving force) to gleefully stab people in the cranium while spouting out moronic and occasionally racist/xenophobic one liners that feel like they belong in an 80s action film that got turned down by Stallone, Schwarzenegger and Van Damme.

Yet there was an entertainment value to those films, and I’d be lying if there wasn’t a perverse joy to be found in seeing a major motion picture that so clearly is not of the moment. Which is why Angel Has Fallen is such a disappointment. In a clear attempt to course correct and respond to the harsh (and deserved) criticism of the previous films, we’re left with a sanded down film that isn’t impressive enough visually to make up for the completely schizophrenic tone or the hackneyed, cookie-cutter plotting.

If you’ve seen an action flick from the past forty years, Angel Has Fallen will feel downright rote, narratively. Mike Banning, our hero, is the sole Secret Service survivor of a failed assassination attempt on the president, and evidence points to him being the prime suspect. This happens like a day after he reconnected with one of his old army buddies whose private military company is financially struggling, who absolutely isn’t involved in the assassination attempt, no siree. The President is in a coma, so naturally the Vice President takes over and immediately blames Russia (timely!) and also totally had nothing to do with this conspiracy. Banning escapes custody and fights his way through dozens of faceless goons in order to find out who is trying to kill the President, because Mike Banning chews gum and stabs people in the name of the American Presidency. And he’s all out of gum.

Angel Has Fallen’s biggest problem, though, is that it desperately wants us to care deeply about Mike Banning as a person. The film presents him as a man broken in body, with back problems, a painkiller addiction, and a deteriorating brain due to being repeatedly concussed. He’s also got some deep-seated daddy issues, because this a man movie and nothing is manlier than having a bad relationship with your dad. This is all on the heels of a film where Mike Banning stabs a guy and says, and I quote, “go back to fuckheadistan.” You can see why trying to make a Skyfall-style character study doesn’t really work for this franchise.

Above: A man who’s trauma we should be deeply invested in

This tone doesn’t carry over to the action, where Banning is, despite debilitating physical and mental anguish, still the same single minded, unstoppable killing machine whenever things start to get heated. This leads to scenes where Mike Banning is contemplating his life choices, his status in life as a soldier fighting never-ending proxy wars on the front lines, and the inherent conflict in his duty to his family and country that come maybe three minutes after he tossed himself on top of a live grenade with a corpse as a shield, flying ten feet in the air. Say what you will about the previous films, but the over the top action fit the tone they were selling. It almost feels like this was like the third and fourth Die Hard films, where it was a completely unrelated script that they threw a Has Fallen paint job.

The sole exception in this sea of mediocrity is Nick Nolte as Mike Banning’s deadbeat, Vietnam-vet dad. Nolte shows up and immediately steals the show, selling way more of the emotional and comedic beats in a way that Gerard Butler’s glowering, craggly meatball act just doesn’t. The action sequence in the middle of the film where his off-the-grid cabin is attacked is easily the film’s standout, as it’s one of the few moments where Nolte and Butler are actually allowed to have some chemistry and tap into some of that unhinged potential that this acting pairing inherently has. Sadly, it immediately returns to the self-seriousness the second the explosions stop, and that little taste just makes the rest of the film a harder pill to swallow.

The best way to describe this series after Angel is to imagine that the Rambo films started with Rambo III, followed by Rambo: Humanitarianism is for Pussies and then the third film was just Rambo: First Blood Part II but with clips of the ending speech from First Blood randomly spliced into the reel. This film is arguably more functional and undoubtedly less bloodthirsty and sociopathic, but at the cost of sapping this series of any sort of personality. There’s nothing in Angel that is even remotely memorable even in a weird, offputting way like the xenophobia of London or Melissa Leo being dragged out of a room by thugs while shouting the Pledge of Allegiance in Olympus. This series isn’t exactly high art, but it was certainly unique. Angel Has Fallen thinks it’s stripping its all-American action hero bare, but really it’s just exposing how little this series has to offer.

YouTube and the Future of History Previous
Review: THE PEANUT BUTTER FALCON Next