REVIEW: ANT-MAN AND THE WASP 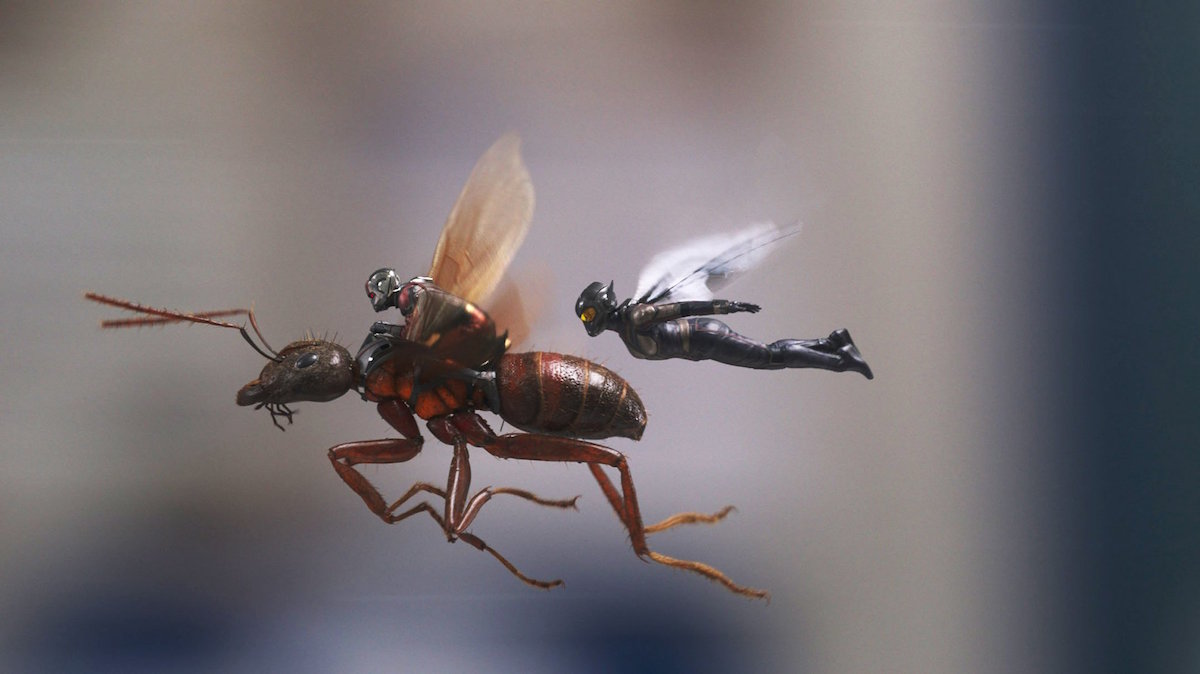 Ant-Man and The Wasp is the 20th film in the Marvel Cinematic Universe.

10 years and 20 films in, the Marvel Cinematic Universe is now firmly entrenched in the collective consciousness. It’s a brand. Maybe the brand, at this point. Built on interconnectivity of plot, the films taking place within the Marvel Cinematic Universe have also been branded with a charge of sameness, based on this foundation of shared events between them. And while there are tangible similarities in tone and structure that support this reading of the films, what most unites the movies existing under the Mighty Marvel banner is not a particular filmmaking style so much as a focus. Character is the staple of the House of M. Marvel have done an unimpeachable job of casting and fleshing out their roster of heroes. Not to mention the people around them. It’s this focus on character that has sustained the experiment, and it’s this same focus that has allowed the franchise to evolve, change, and develop beyond the structures (of both story and style) upon which it was built, whether the denizens of Film Twitter would accept it or not. Peyton Reed’s Ant-Man and The Wasp is a film that is just as devoted to its characters as audiences have now become. In fact, the film is kind of about that.

The followup to 2015’s Ant-Man, Ant-Man and The Wasp, takes place nearly 2 years after the events of Civil War. We find our hero Scott Lang (Paul Rudd) on probation, having copped a plea with the FBI to avoid SuperMax incarceration, the consequence for his impulsive decision to aid Captain America in his stand against the Sokovia Accords. Though he spends his days under house-arrest, reporting regularly to his FBI handler (played by a hilarious Randall Park), he’s living a fairly full life. He has visitation with his daughter Cassie, and the acceptance and love of his ex-wife and her cop husband. He has co-founded a security consulting firm with his loveable sidekicks from the first film, Luis, Dave, and Kurt. But he’s Ant-Man no more, now that Dr. Hank Pym and his daughter Hope are wanted fugitives (partly his fault, for coming out so publicly sporting Pym’s tech). A strange vision from the Quantum Realm shakes up his new normal, and soon enough he finds himself shirking the bonds of his probation to help his former teammates and found-family to track down their matriarch, Janet Van Dyne (Michelle Pfeiffer), long lost to that same sub-atomic universe. It’s at this point they find themselves in the crosshairs of both a greedy superweapons dealer (played by a sleazily jovial Walton Goggins) and a mysteriously enhanced assassin known only as the Ghost.

Taking place prior to the events in Marvel’s Avengers: Infinity War from way back in April of this year, Ant-Man and The Wasp functions more as a sequel to both the original film and to Captain America: Civil War, Peyton Reed’s newest entry to the MCU carries forth the central themes of both familial legacy and reckoning with consequence from those two films, but in surprising and endearing ways. Let’s call it like it is: this is a lighter Marvel entry. Ant-Man and The Wasp is a palette cleanser after the catastrophic events shown in Infinity War. Just as Ant-Man’s goofy gallantry helped us to release the pressure following Ultron’s attack on Sokovia, this new film offers much-needed respite in the wake of the most devastating event in the history of the Marvel Cinematic Universe; the dreaded Snapture. But laying the kissing of our booboos at the feet of these Ant-Man films, resplendent in their wacky action and schlubby blue-collar charm, isn’t quite accurate. It misses the point of what these films are about. And what Peyton Reed is saying with them about family. Reed is less interested in the world-ending stakes of the main Avengers series, or the personal grudgery and societal commentary of entries like Black Panther. Here, Reed is focused on the importance of family, both found and inherited, and how we honor the bonds of trust and responsibility to those we care for the most. In restricting the focus and stakes to a laser’s breadth on familial bond, Reed has also made potentially the most proactive, goal-oriented, and humane film and hero in the Marvel catalog, which tends to feature characters who more react to machinations around them than forge their own path forward. That reactive default is great for defining our characters in terms of the world around them, but it doesn’t always allow them to define themselves for us.

Peyton Reed is now firmly seated as the master of our insectoid destiny, rather than having to build his original film in the wake of Edgar Wright’s sudden departure from Ant-Man. But instead of being some jarring departure of vision, this kind of finally puts to bed the ‘how much was Wright, how much was Reed’ noise that surrounded the release of Reed’s inaugural film. The heart and soul of this new series is firmly Reed’s doing. This is a series about characters who have created a family, and who care for eachother deeply, doing the best they can to take care of those they love. In fact, barring Goggins’ avaricious Sonny Burch, there are no real villains in this film. Learning perhaps the best possible lesson from the failures of Iron Man 2, even Burch himself is refreshingly separate from any thematic or familial entanglements with the main players, serving much more as an obstacle to the aims of the heroes, rather than some form of personal foil with a grimderp vendetta.

Instead of personally vengeful characters caught up in their trauma, we get an assortment of families, all focused on their own aims and bouncing off of the goals and needs of the others. Ghost may attack our heroes, driven by pain and mortality, but her interactions with another character from Hank’s past (Laurence Fishburne) are based on empathy and fatherly protection for a lost and abused child. He wants to save her life, but not at the cost of her soul. Outside of Goggins, no character in the film is out for personally evil goals. And one gets the sense that even Goggins’ Burch is acting out of self-preservation for decisions he’s made. Most importantly, Hank, Hope (an ass-kickingly wonderful Evangeline Lilly), and Scott’s goal is not to defy Burch or to stop Ghost, but to find and return Janet to the world and to their family. The ramping stakes and desperation our heroes face isn’t due to some superbomb ticking down, but to the gradually slipping chance they have to reach someone they love. Scott’s fears aren’t that a madman is threatening the lives of his family, but that by getting back into ‘the life’ he could seriously hurt those closest to him who rely on him. Scott’s made bad decisions in his life, always for the right reasons. But that is of small comfort when your child can’t see you because you’re in prison. When you let your partners down in life, having a good reason at the time does very little to repair the damage you’ve done. His families don’t want to see him throw away the chance he has at a decent life, but more importantly, Scott Lang no longer wants to sacrifice the wellbeing of those he loves for selfish or impulsive decisions. What you’re left with is a different kind of ‘snuggly suspense’, where the personal investments of the characters drive everything forward, rather than manufactured catastrophe.

All of the above may sound like a candy-coated and fluffy adventure, without much in the way of stakes, as they are usually understood by the Serious consumers of these Serious Business™ Comic Book1 Films, but to be honest, I’m exhausted by this kind of audience member, and their constant refrain of “NO STAKES!”. All these people want is death, and po’-facedness, and misery, and no amount of their justifications is going to change that this is what they need from these films that I do not. And I’m done with it. After world-ending events in Infinity War, and personally and societally shattering revelations in Black Panther, the new facet that this film gives me is a wholesome, character focused film, entrenched in real family values, with the stakes being once-again deeply rooted in what these events mean for the characters.

From top to bottom, Marvel films are a showcase of characters who become dear to us. Because of the amazing work that Marvel has done casting their players, and building them as people, we are invested. The Earth-shattering events depicted in the films don’t just matter because of the what on-screen, but because of what it means to our central protagonists and the ones they love. Unlike the broken families and bad dads of the most recent Guardians of the Galaxy Vol.2, this is a film about families that love each other, looking out for one another the best ways they know how, while jumping around in physics-defying supertech to possibly Marvel’s best score yet (Cristophe Beck has seriously outdone himself). And this is the secret weapon of Ant-Man and The Wasp: behind the bonkers, shrinking-and-growing action scenes, the dimensional tardigrade-feeding trippiness, and all the fantastic asskickery with The Wasp (and Ant-Man), it’s a film about how we do the best we can for the ones that we love, always.

PS. This film has hands-down the best Stan Lee cameo ever. I will not spoil it.