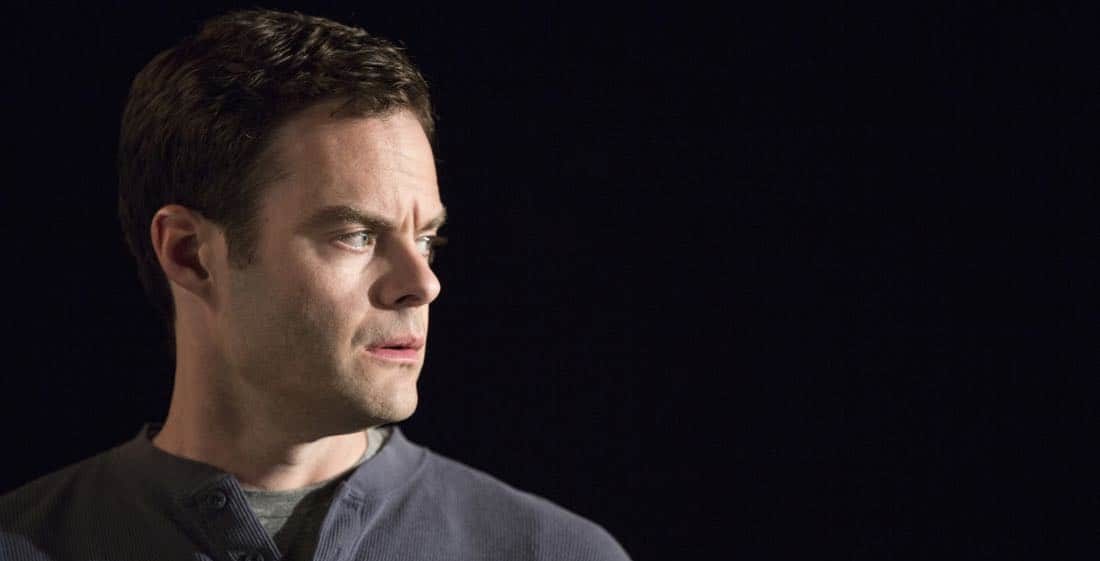 If you’ve read any recent interviews with Bill Hader where he’s talking about the genesis of Barry, his new dramedy on HBO, you’ll know that performing live every week on Saturday Night Live made him a nervous wreck because he had intense stage fright. As the face of a thousand characters (including Stefon, his most famous avatar), Hader is one of the most talented cast members of his generation. It makes sense then, that he’d turn his sights onto something meatier, something that kept him away from live comedy and allowed him to flex his muscles in a different way and to channel the anxiety from SNL into something wholly unique.

Now, in 2018, the newest year in our ongoing political dumpster fire, we get Barry, a show about a Marine back from Afghanistan who can’t get any satisfaction being a hitman and feels like he is without purpose until he wanders into an acting class by accident and discovers a band of misfits who show him he has potential to be an actor.

It continues to be a good time for fiction to examine the effects of war on our service members. On any other show, it would be easy to play it broad, and to make a big splash by saying something about the war, about the people it breaks and leaves behind. But Barry is smarter than that. It doesn’t want to say something big and broad about the war; it only wants to take a look at one man, Barry Berkman.

Barry is ostensibly a manly man; he’s fought in a war, for God’s sake. But war destroys even the best of us, and even without a single flashback scene to his days in the desert (in this episode) we understand how profoundly it has changed Barry. Whoever he was before he left, that person is most assuredly gone now. In his place is a man who feels nothing at all. It’s a tragic role, and Hader brings a seriousness to it that belies his comedic chops. His face shows a haunting sadness one minute and a scary resolve to commit violence the next, and the two feelings aren’t unrelated, giving the show a complexity that makes me want to hug Barry and also run away from him.

Don’t get me wrong. This show is drama, but it is also really, really funny. It’s just that the best jokes are going to other heavy hitters like Stephen Root and Henry Winkler, because for this episode (and possibly for this series) Barry needs to be the opposite of happy, funny, and settled in life. Not many chuckles there (though Hader mines the hell out of a well-timed, frustrated “fuck!”).

This show gives Hader a chance to show us he’s more than a funny man and more than Stefon, and he commits to it fully and wonderfully. Barry is the role of a lifetime and Hader pours every bit of himself into the show. In fact, it’s hard to imagine anyone else pulling this off. He’s wearing all the hats on this show; he co-created it (with Alec Berg, executive producer on Silicon Valley), wrote several episodes, directed several episodes, is a producer, and stars in it, and he’s in every scene.

The supporting cast is wonderful to watch, too – particularly Stephen Root as his boss and mentor, Fuches. When Barry, new in LA, stumbles upon an acting class while tailing the man he’s supposed to kill, he’s immediately welcomed and encouraged, even though he’s terrible on stage. In fact, the whole class is pretty terrible on stage, but that’s not the point. What is the point? As Gene Cousineau, the class’s acting coach, tells Barry: get at the truth. Who is Barry? He doesn’t even know. But he’s game to find out, even as he’s got a violent past, present, and future to contend with. I loved Barry, and I’m definitely game to find, out too.

I don’t want to spoil the last few minutes of the first episode, but I’ve been thinking about it a lot, both in how it is framed and shot, and what it means for Barry. The scene I’m talking about takes a sharp turn to remind us of the delicate balance between Barry’s career and his aspirations. With that last scene, Barry finishes establishing a character we want to root for, while showing us just exactly what kind of character we’ve decided to root for.

Much like Pete Holmes on Crashing, another HBO show that I started watching recently (I am aware I am late to the party since it’s been on for two seasons), Bill Hader wants us to see Barry as a guy who has issues – real traumas that perpetuate a gray, listless life. Strip away the nature of his profession, and what you get is a guy who feels stuck. Who can’t relate to that? I certainly can. Then sometimes in the deepest throes of sadness, we get lucky and fall in with a group that is accepting and caring. People who can help us maneuver through our bad decision making, give us hope, and encourage us to realize our potential. What more could we ask for in this life?

There Was An Idea... THE GUARDIANS OF THE GALAXY & The... Previous
BARRY Review: Season 1 Episode 2 Next