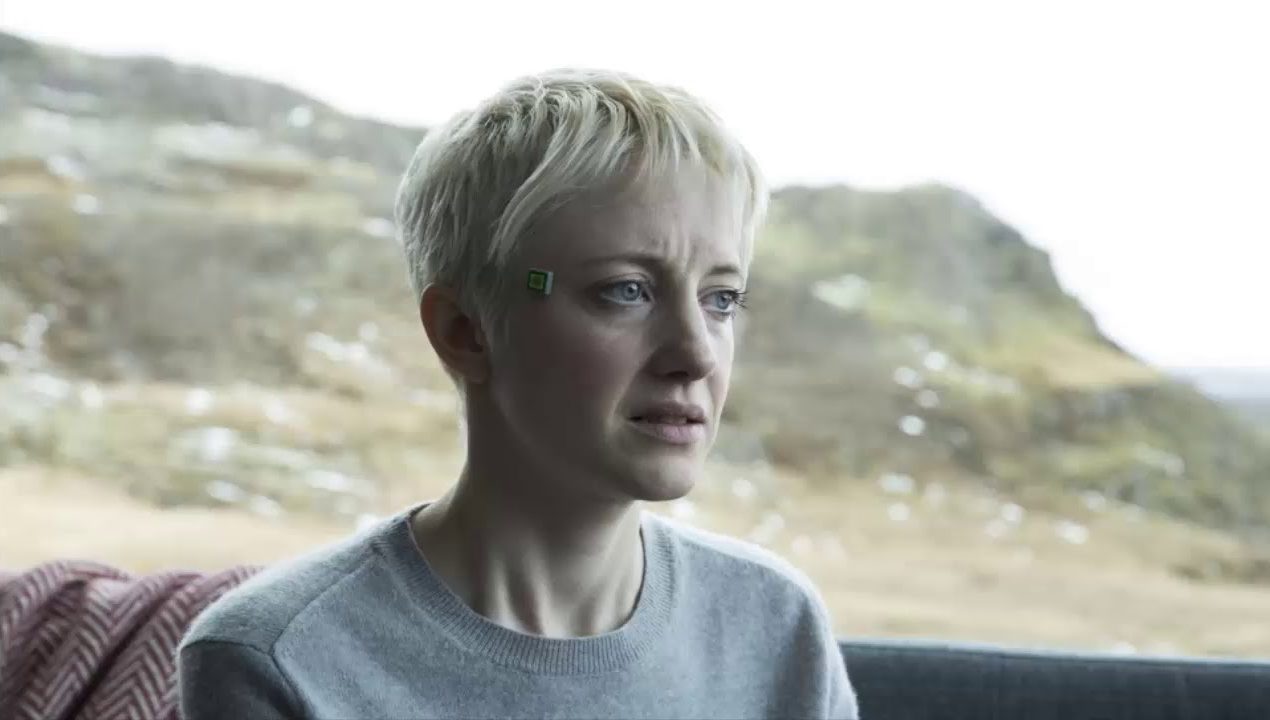 Taking a break, taking a peek at the Twitter-verse, I stroll down Hashtag lane with a basket, collecting opinions and impressions, as I’m slowly kindling the thoughts in my distracted brain. Twitter is buzzing with mild-vexation pointed towards ”Arkangel”’s weird representation of abortion and the Morning-after pill. In the midst of all that, not much is said about the potency of this episode. It is not bad, but unremarkable, mean spirited towards the end, yes, but the mixture of Brooker and Foster’s active agents don’t coalesce into a very potent fix. No one’s actually high on it. I approvingly scroll, still looking for someone whose low tolerance for this type of visual chemical would spark a crossfaded response to it. Warmer responses begin to show up: “White people be crazy” or “White parenthood had me cringe”. That’s when I start to understand that the cultural response to this episode might be a little more interesting than the episode itself.

Taking a bite out of a balsamic avocado ham and tomato sandwich, and sipping my third black coffee, replenishing my strengths before I get on with the binge, I venture to type “Crocodile” on the twitter search bar before watching it. I stop and hum to myself a single note of surprise and interest.

So. Many. Expletives. So much rage.

The few black twitter writers who poke fun at white parenthood in “Arkangel” are joined by a swarm of binge watchers that attribute Hell, Apocalypse, and the collapse of society to white people after “Crocodile”. As a straight cisgender white male chewing on avocado, I don’t necessarily disagree.

Such a strong response only warms my interest in checking out “Crocodile”, as I’m interested to know that Black Mirror has tackled a racially charged representation, apparently, head on.

Let’s break it down to its initial plot, acting and direction before shit hit the Blade Runner-style shadow and dust-swirling ceiling fan.

The beginning of the episode shows a couple driving a car, engaged in a playful conversation. Everything’s fine. The car they drive through the beautiful landscape of Iceland must be telling something about the coldness, the harshness of such a place.

As a new citizen of Montreal, the -9 Fahrenheit days are all too common, and before I get a feel for the characters, I already get an uncanny feel for the place. It’s like the cold is slipping through the screen, like that hand crawling out of an old CRT TV in Videodrome, and it’s an impression that never leaves me as the plot slowly progresses to its illogical, awful, nonsensical, madness-stricken conclusion… But I digress.

The car just hit someone. Okay. That guy’s dead. Mia, played by Andrea Riseborough can’t hold back her tears while the man who drove the car takes the life-altering decision to hide the body. They do so. Tears roll down her eyes.

I think to myself: Ice cold location, sharp direction, guilt-ridden protagonist, something feels familiar and it should be interesting.

Cut to years later, and we’re introduced to Mia again. Blond hair still, cut short. Blue eyes gazing out in the distance, living with her husband, who’s not the hit-and-run guy, and their kid. She seems quite successful. But the story must progress, and the hit-and-run guy is back, and he’s here to make amend. But she won’t let him. So she kills him. Like that. Everything’s fine it’s okay, it’s dealt with logically.

A second protagonist appears. A woman called Shazia who works with insurance companies. Shazia is played by Kiran Sonia Sawar, and she wears a veil, Iranian style, showing her black hair. The ethnicity of her character cannot be mistaken as a detail that was not planned in this episode. She’s a stark contrast to Mia. She’s the Insurance company detective that is sent to clarify the circumstances of an automated pizza dispenser accident that Mia witnessed, right after she killed the hit-and-run guy.

The only technological tool explored here is a device that allows Shazia to scan memories of people, albeit imperfectly, to monitor contentious incidents. For the first time in Black Mirror the technology is not shown to be inherently bad. And I need to be careful here, but it seems to be because the one person using it is Shazia. She’s one of the only people confronted to a new piece of technology that does not alienate of corrupt her.

But Mia cannot allow a piece of technology that messes with her mind to exist, as she owns incriminating memories. Mia takes what she assumes are the logical steps to stop the trail leading to her. What happens next is an explosion of violence where every single witness, whose memories connected to Mia can be accessed through the device, will be killed.

The direction is superb, Shazia is facing the camera when she uses the technology and it gives us a great counterpart to Mia’s bottomless steel blue eyes. The actors are always at the top of their games, and Andrea Riseborough is displaying the strength and the distance to pull off a disconcerting character. She believes in what she’s playing. Iceland is wonderfully shot.

So. On to the not so nice part.

SHE FORKING KILLED THE BABY.

The events depicted are unpleasant, violent, and dramatically misguided.  As seen in prior episodes here, technology is neither the main trigger of the chain of events nor is it the focus. It’s a continuation of human morality and actions through new means of questioning them. Brooker’s sci-fi is usually hard wired to explore recognizable limit-behaviors you could expect in individuals. Technology is only the gentle nudge towards dire situations. Decent, common people set against their worst instincts.  This episode reminded me a lot of the canvas of “Shut Up and Dance”. In this episode, a teenager was forced by a group of online blackmailer to do their bidding because of problematic information they have about him. The twist at the end shed a new light on the kids and our understanding of the blackmailer group. It muddies the water, brings an additional edge to the whole experience, but never feels forced or unearned. It is rooted in character. When Mia suddenly turns into a cold killing machine whose tears are like those of a crocodile, chewing on their victims as I’m angrily biting my third avocado toast in disgust it does not come from a place rooted in character, it does not even come from deep rooted racism, because nothing alludes to potential racism. Its visuals are devoid of intent. It is slick direction without actual writing. It’s technology without purpose.

As the beautiful direction was trying to tell a guilt-driven thriller, all I could hear was the gears of the story turning in unnatural ways, you know like those drawing of gears that turn in video-games and are physically impossible. The weird, devious technology at play here was not so much the memory technology as much as it was the story.  The artificial pull of a character who becomes a sociopath for the sake of shock value, a poorly driven race metaphor, and a god awful twist involving the death of a baby and a surviving hamster. All combined they make for sloppy drama, which is something we cannot condone in Black Mirror. As a TV show that almost always walks the tight-rope of the reflection on human beings confronted to technology, and horror tropes, this is a problematic misstep.

It is politically charged bodies in motion, hit by meaningless writing.

It is the writer performing a hit and run on his own story.

So. Here’s a list of questions I had right after I shut my computer down and went for an angry, winter walk. Hours later, I came up with a few responses:

Am I to guess that she killed every member of this family made of people of color because a predominantly white people’s society is just going to crush people of other ethnicity, erasing them like they would love to erase their memories? YOU GOTTA SHOW IT BETTER THAN THAT.

Is there anything more than the aesthetic of a blue-eyed, blond woman killing a hijabi woman, her husband and baby of a different ethnicity to explore racism in Icelandic society? YOU GOTTA SAY MORE THAN THAT.

Am I to understand that Iceland races relations are a mixed combination of locals and people of foreign origin having a difficult time in a harsh cold land that sucks the life and empathy out of people? WATCH FARGO INSTEAD!

You want to say something thought provoking about white people defining rules of society and acceptance of what is deemed good and bad behavior, as a lot of them are being cruel devious people devoid of empathy, and actually rigging the game for PoC and other oppressed people? WATCH THE GOOD PLACE INSTEAD.

I got horrified at:

Composer Jóhann Jóhannsson Has Died Previous
It's BLACK PANTHER Week, People! Hail to the king! Next

My body my choice?